Posted on October 1, 2019 by climatechangefork

One of the main stops on my extensive summer trip (September 4th blog) was Germany. I have talked about that throughout September (with the exception of my September 10th blog, when I focused on Dubai). This blog will be the last in the series. Specifically, I want to look at why Germany is (or is portrayed as) failing in its attempts to combat climate change via an energy transition away from fossil fuels (September 17th). My wife and I were fortunate enough to have friends drive us through Germany from Holland. We first visited the Magdeburg area, the place where the American army liberated me, my family and 2,500 other prisoners of the Nazis. I am part of a group that includes a local school, trying to erect a monument near the liberation site to celebrate survivors and liberators and memorialize the event. Following an event co-organized by that school, a local family drove us to Berlin.

We drove through about 60% of Germany, seeing the vast mid-country landscape (the shortest distance between Berlin and the Polish border is 247 miles or 398 km); from the Netherlands to the Polish border is 590 miles (950km). Windmills dominated our view as we drove (and this isn’t even the densest area of windmills in Germany; that’s farther north, toward Denmark and the Atlantic Ocean). We took photographs wherever we could. I am including two of them below as Figures 1 and 2. They demonstrate the two main arrangements: one is a densely packed windmill farm owned by a utility company that also oversees power distribution; the other is a more limited number of windmills on the field of a local farm. 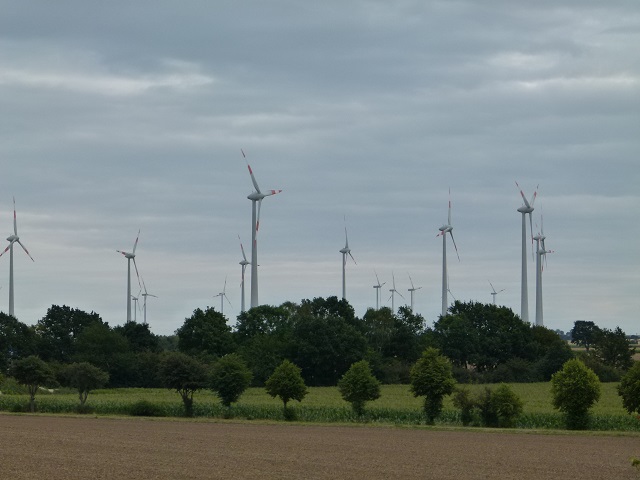 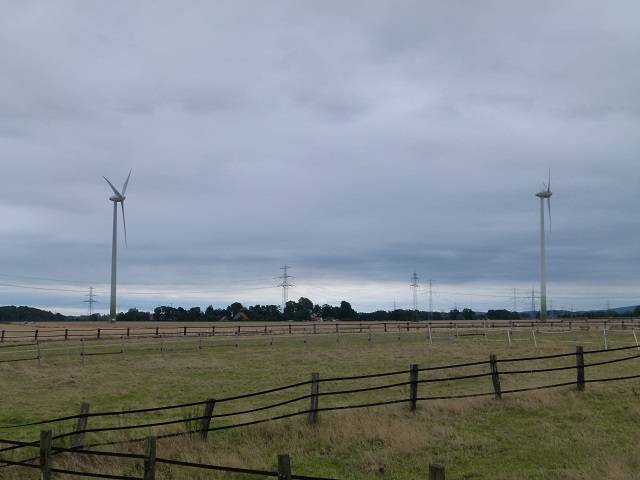 I asked around about how much farmers can get for agreeing to host windmills on their land. The response I heard was roughly 200,000 Euros/year. For that kind of money it is no wonder that the landscape is full of these devices. Once I started to investigate the issue in Germany as a whole, I found that the numbers overall look a bit different. There is a great, detailed paper about this, published in Energies (2019, 12, 1587): “Wind Turbines on German Farms—An Economic Analysis.”

Figures 3 and 4 show the full picture in terms of Germany’s use of renewable energy, using data from the German Federal Ministry of Economics and Energy.

The start of the timeline in Figure 3 coincides with the unification of Germany (1990). The inverse trend between GDP and carbon emissions is impressive and certainly worth emulating. 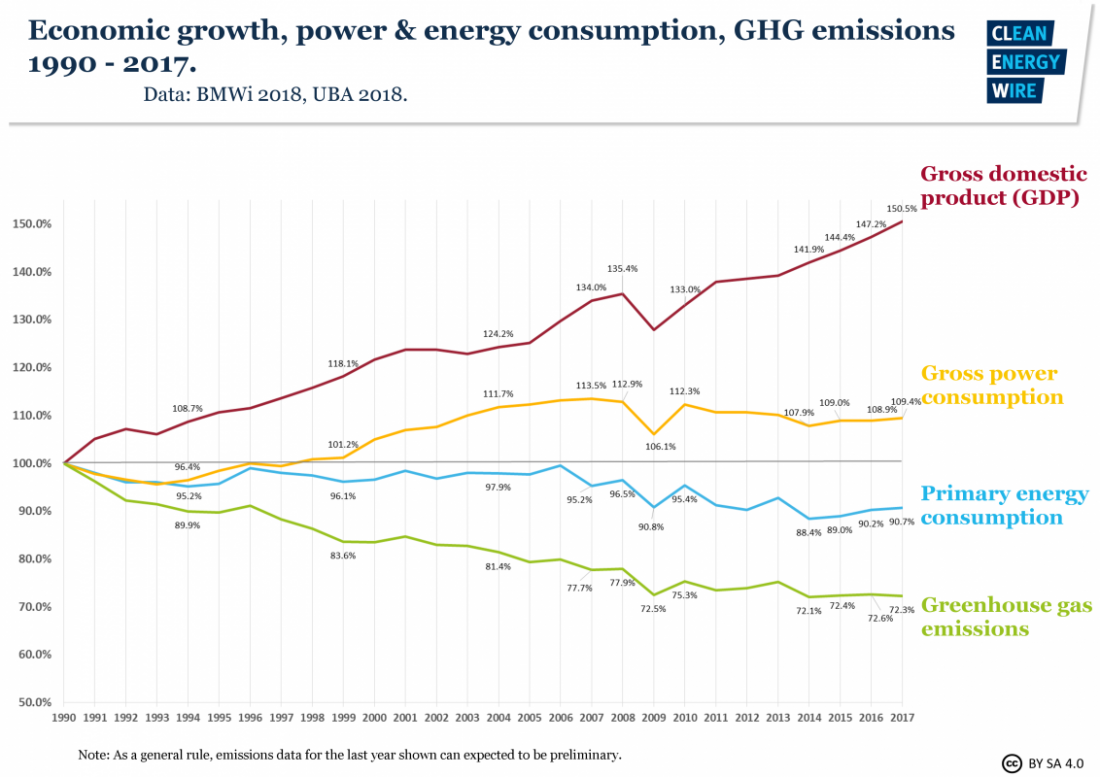 Figure 4 starts 12 years later and looks at the growth in generation capacity among clean energy sources. 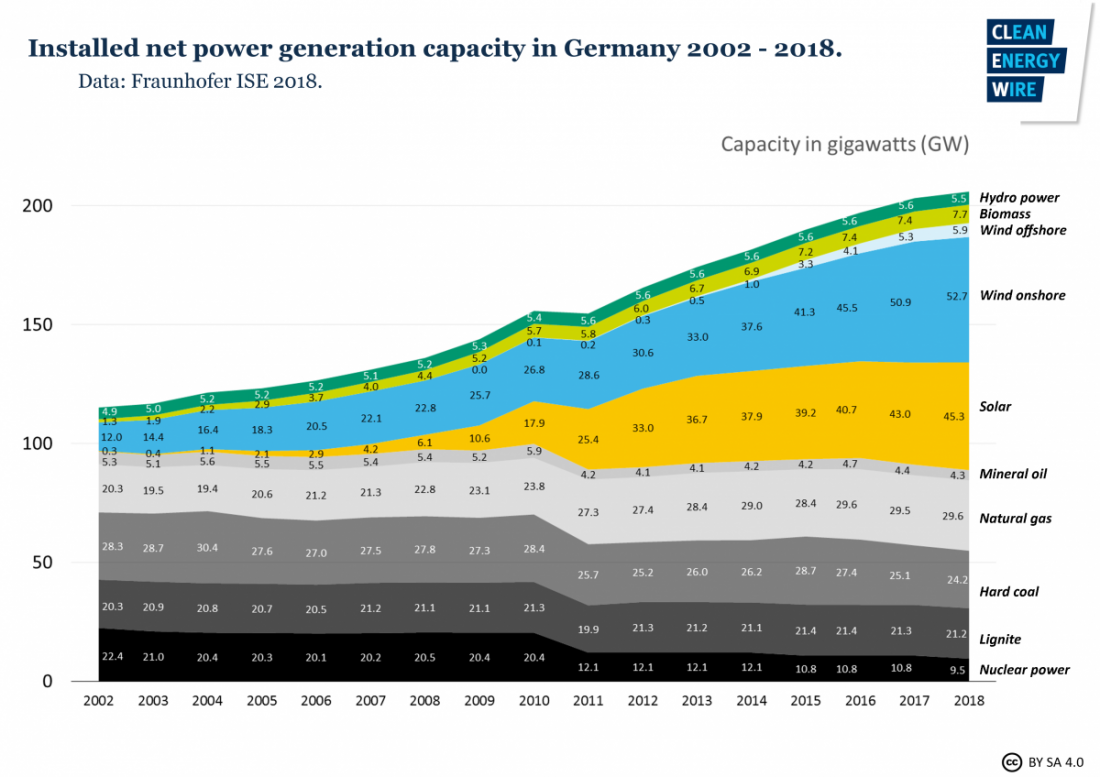 Figure 5 shows the ambitious commitments that Germany made in 2010. 2020 will be the first milestone when the country’s progress in the energy transition (see the December 9, 2014 blog for more details) will be evaluated. 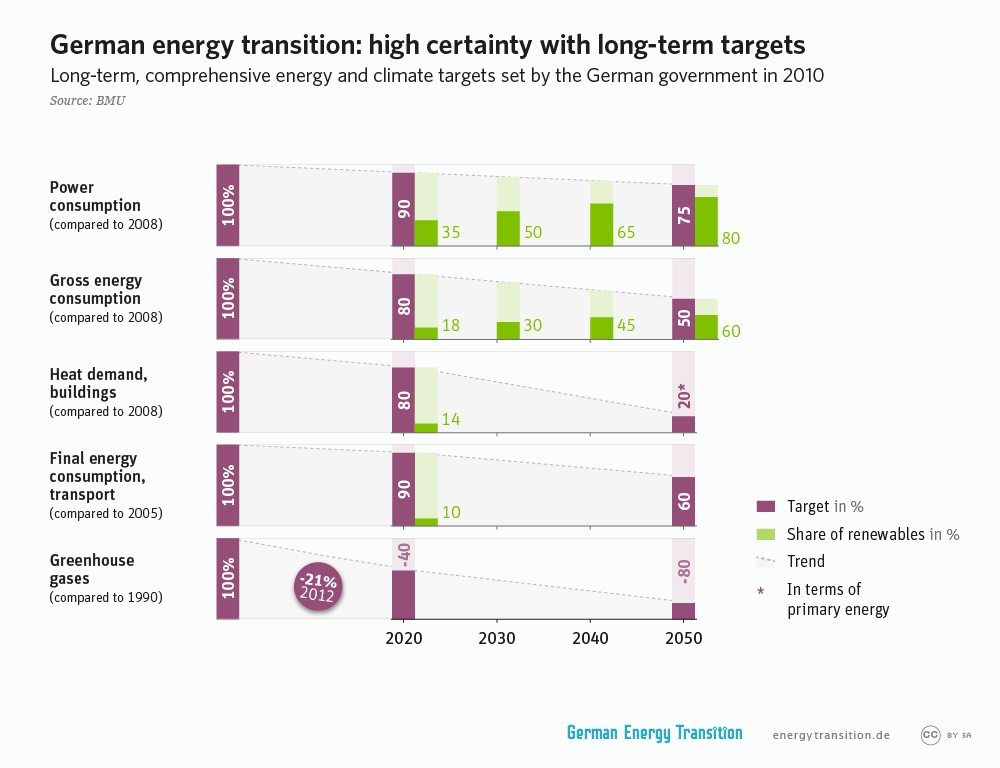 Chancellor Angela Merkel commented about the present status of the German energy transition. She did not sound particularly optimistic:

ANGELA MERKEL has admitted the dire state of Germany’s automotive industry means the country will fail to achieve it previously set goals. The Chancellor said achieving the goal of 65 percent green electricity by 2023 is “questionable” in light of the industry’s decline. Merkel made the comments during a speech at the International Motor Show in Frankfurt this week where the number of participating companies fell by a quarter from last year, in a sign of the industry’s failings. Some large manufacturers such as Toyota or Fiat did not attend.

Indeed, more recently, after some haggling, Germany decided to spend some 60 billion Euros to get back on track. For many in Germany it was too little, for others it was too much. In any case, it all reflects the country’s efforts to satisfy commitments that the German government made in 2010, under different economic conditions.

In the next blog I will try to compare Germany’s efforts with those of the rest of the world.

Micha Tomkiewicz, Ph.D., is a professor of physics in the Department of Physics, Brooklyn College, the City University of New York. He is also a professor of physics and chemistry in the School for Graduate Studies of the City University of New York. In addition, he is the founding-director of the Environmental Studies Program at Brooklyn College as well as director of the Electrochemistry Institute at that same institution.
View all posts by climatechangefork →
This entry was posted in Climate Change, Economics, Electricity, Energy, Sustainability and tagged Angela Merkel, biomass, carbon dioxide, Cars, climate, CO2, CO2 emissions, Coal, commitment, Electricity, Energy, Energy Consumption, energy transition, Fiat, Germany, GHG, greenhouse gases, hydro, manufacture, mineral oil, Natural Gas, Nuclear, nuclear power, Power, power consumption, renewables, Solar, target, Toyota, Wind. Bookmark the permalink.