Posted on September 17, 2019 by climatechangefork

My original plan was to continue writing about what I learned during my summer-long trip. Last week I focused on Dubai and I thought to focus this week’s blog on the greenhouses in the Netherlands. However, as usual in this business, reality has a way of disrupting our plans. In this case, it was an article in Forbes that caught my attention: “Why Renewables Can’t Save the Climate.” Below are some excerpts from the piece:

But the centerpiece of all the Democratic candidates is renewables, upon which the candidates propose spending trillions.

Doing so, they all claim, will be good for the economy and the natural environment, including by preventing climate change. But around the world, renewables are in crisis because they are making electricity more expensive, subsidies are expiring, and projects are being blocked by wildlife conservationists and local communities.

In Germany, the world leader in renewables, just 35 wind turbines were installed this year. The country needs to install 1,400 per year to meet its climate change targets.

“While climate activist Greta Thunberg is sailing with wind power to the Sustainability Summit in New York,” wrote Die Welt, “the German wind power industry is sailing into the doldrums.”

The halting of wind deployment in Germany has resulted in the industry shedding 25,000 jobs over the last year.

It’s not clear Germany can handle much more wind. Its electricity grid operator increasingly has to cut off electricity from industrial wind farms on windy, low-demand days, to avoid blow-outs.

The same is happening in California. The grid operator increasingly must pay neighboring states to take the state’s excess solar electricity, and cut off power coming from solar farms, on sunny, low-demand days.

The article focuses on criticism of the global energy shift from fossil to sustainable solar sources such as wind, photovoltaics, and biogas. It pays special attention to the negative consequences of these new systems in Germany and California. There are other articles that address similar complaints within Germany. I just came home from a trip that involved driving across Germany and seeing the changing landscape with my own eyes, but I’ll delay that discussion for later.

Meanwhile, I started to think about both the physics of energy transitions and, separately, about polar bears.

Figure 1 shows a picture taken from the internet of a polar bear with her two cubs on an isolated piece of ice surrounded by water. The polar bears look real and feel different from the fake polar bear shown in Al Gore’s film, “An Inconvenient Truth,” which drew strong objections from many of my students when I screened the film as an introduction to the topic of climate change. 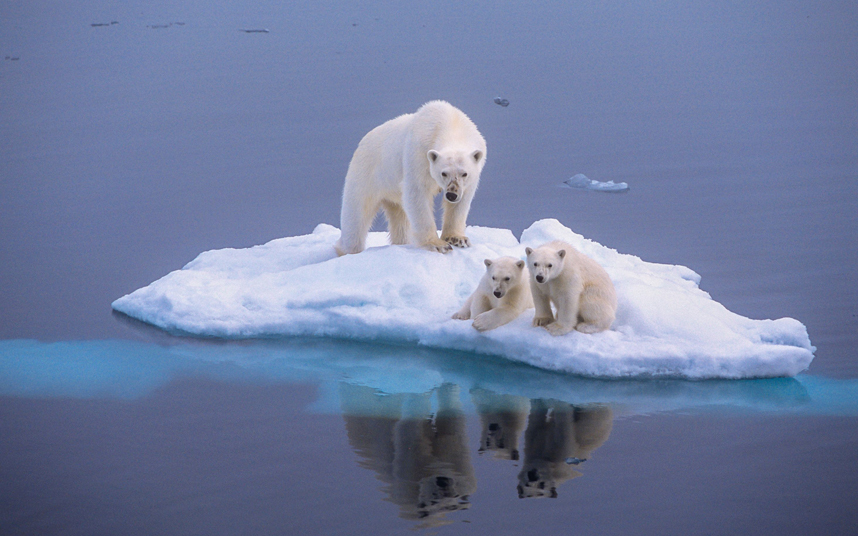 I followed my thinking about these polar bears on their small piece of ice in the middle of a vast span of blue water by zooming out to show the context of the larger area in Figure 2, a satellite picture of ice melting in the Arctic. 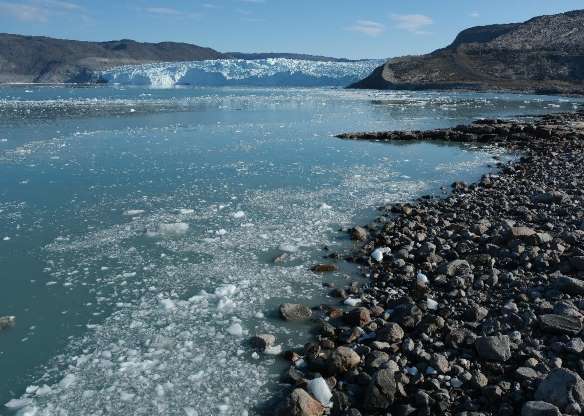 I imagined the mother bear “explaining” what is happening in their environment to her two cubs. She obviously doesn’t have any thermometers to measure the temperature of the water and didn’t attend classes that would enable her to explain the phase transitions between water and ice. However, the sheer scale of the satellite picture shown in Figure 2 is so massive that it would likely be beyond the bears’ comprehension. More likely, the mother bear would simply teach her cubs that water extends a very, very far way. An earlier blog (April 16, 2019) showed us that before the beginning of the 18th century, humans were not much better educated on this issue than the mother bear. We had no thermometers until 1709, and no satellites or any other useful technological gadgets to help us with context. In other words, the mother bear’s best advice for her cubs: stick around and hope for the best—is not far from our own past strategy.

Phase transformations are generally the transitions from one phase or state of matter to another one by heat transfer. The term is most commonly used to describe transitions between solid, liquid, and gaseous states of matter. Freezing and boiling water are probably the simplest examples but there are many possibilities for this kind of transition. It is not surprising that a global energy transition is rich with options for such transitions.

People experiment with almost everything. If the experiment succeeds, they have a chance to harvest big awards; if it fails they—or their investors—will lose money. Since the transition is global, countries tend to experiment with various forms of subsidies that spur international competition. If these subsidies are time-limited, however, we get strong fluctuations in the profitability of the initiative.

With the modern technology and communication modes available to almost everybody, it is easy to cherry-pick successes and failures that back up our various agendas. This is exactly what seems to be happening right now.

Global wind turbine order intake increased by an impressive 111% in the second quarter of 2019, according to new figures published by renewable energy research firm Wood Mackenzie Power & Renewables, overtaking the previous record set in the fourth quarter of 2018

Year-to-date demand amounted to 79 GW thanks in large part to increased demand in China and the United States and despite a decrease of 41% YoY in Europe during this year’s second quarter. China and the US enjoyed impressive quarters for capacity ordered as developers made a beeline to procure turbines with sufficient time to commission projects before 2020 subsidy deadlines in both countries ran out.

Unsurprisingly, Germany and the rest of the EU have flagged somewhat in their pursuit of these efforts due to the European economy’s slowing over this period.

In June, one of the most respected scientific publications, Applied Physics Reviews, published a detailed, peer reviewed, technical report about the status of wind power, with an emphasis on European and German efforts. The report, in Volume 6, Issue 3, is called, “Powering the 21st century by wind energy—Options, facts, figures.” All the authors of this report work at the Fraunhofer Institutes.

Cherry-picking convenient small instances (even if they’re true) from within the complex global energy transition is not much different from picking a weather trend that lasts a few days anywhere in the world and using it to make a statement about the global climate. It is also not too far from a person shouting in the middle of the night somewhere, that, “It’s dark, therefore there is no sun,” as I showed in a caricature in February 12, 2019.

Since I have already published a few blogs detailing the German energy transition (December 9 – 30, 2014), I will update the country’s situation next week.