Solar Roads: Driving Into the Future

Posted on February 18, 2020 by climatechangefork

The last three blogs were not fun. Some of my readers have asked, “Where can we move that isn’t here?” The answer, sadly, is nowhere. We must try to fix this place. Many of us are already doing so. We are now in a global energy transition but it is way too slow and is most active as a grassroots operation (bottom-up). In fact, many of our global leaders are resisting the changes. Of course, almost every transition involves multiple failures and a few successes (polar bears and her cubs – September 17, 2019). Right now, we are failing in our efforts to accommodate those who are suffering in the transition.

An interesting step in the right direction is solar roads. I hadn’t heard about the idea until I saw news about local projects when I visited the Netherlands last summer. I generally try to follow through with topics as I encounter them but in this case I got distracted with other important issues. I am returning to the matter now.

France made the first attempt at solar roads for cars. Figure 1 shows the project, taken from an article that describes the technology. 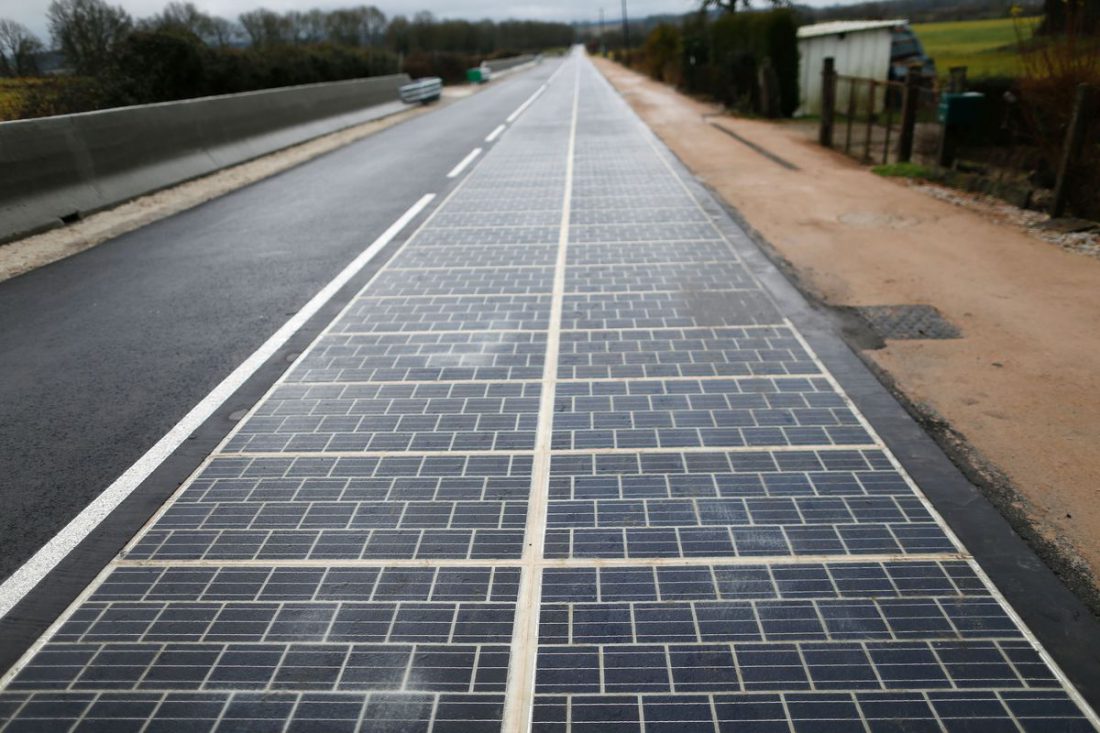 The article came out on December 22, 2016, roughly the same time as the road opened:

The world’s first solar road is here, in the small village of Tourouvre-au-Perche in Normandy, France. The 1 kilometer road was opened yesterday by French Ecology Minister Ségolène Royal and could generate enough electricity to power the street lights.

That might not sound very impressive for 30,000 square feet of solar panels — and it kind of isn’t, especially for its $5.2 million price tag. The panels have been covered in a silicon-based resin that allows them to withstand the weight of passing big rigs, and if the road performs as expected, Royal wants to see solar panels installed across 1,000 kilometers of French highway.

There are numerous issues, however. For one, flat solar panels are less effective than the angled panels that are installed on roofs, and they’re also massively more expensive than traditional panels. Colas, the company that installed the road, hopes to reduce the cost of the panels going forward and it has around 100 solar panel road projects in progress around the world.

It didn’t take long before the concept was deemed a failure:

Two years after the world’s first solar road — the Normandy road in France — was set up, it’s turned out to be a colossal failure, according to a report by Le Monde.

The road has deteriorated to a terrible state, it isn’t producing anywhere near the amount of energy it had previously pledged to, and the traffic it has brought with it is causing noise problems.

Though a US-based solar road has suffered a similarly discouraging fate, a Dutch project has provided a silver lining on the future of solar roads.

By mid-2018, people had started analyzing the pros and cons of the technology:

Naysayers of the technology have said solar highways are impractical. An article on the blog Extreme Tech calculated that covering all the roadways in American with solar panels would cost $56 trillion.

The technology behind Solar Roadways is feasible, according to experts, but does have certain limitations. For example, the performance of the solar panels decreases if they become grimy. To overcome this problem, Solar Roadways has proposed the use of self-cleaning glass, which uses chemically-engineered materials to keep dirt and water from sticking. However, this could make for a slippery road surface.

Regardless of such risks, as Wikipedia describes, commercial interest has started to develop. Other countries have also begun experimenting with these infrastructure technologies, including France, the US (near the Alabama-Georgia border), China, South Korea, and Hungary (near Budapest).

The Korean example was of special interest to me. It came out before the French attempt and it reflects a different concept of the solar road: here, rather than support driving cars, the solar cells act as shading roofs for a dedicated (and divided) bike lane.

Is this the greenest road ever? A highway in Korea features a stunning solar-powered bike lane running right down the middle. The lane is offset, protected by barriers, and sheltered by solar panels. The lane runs from Daejeon to Sejong, a distance of around 20 miles (32 km), which is a few hours’ drive from the capital city Seoul. It’s a fantastic idea that could pave the way for similar commuting-style bike lanes in the future. 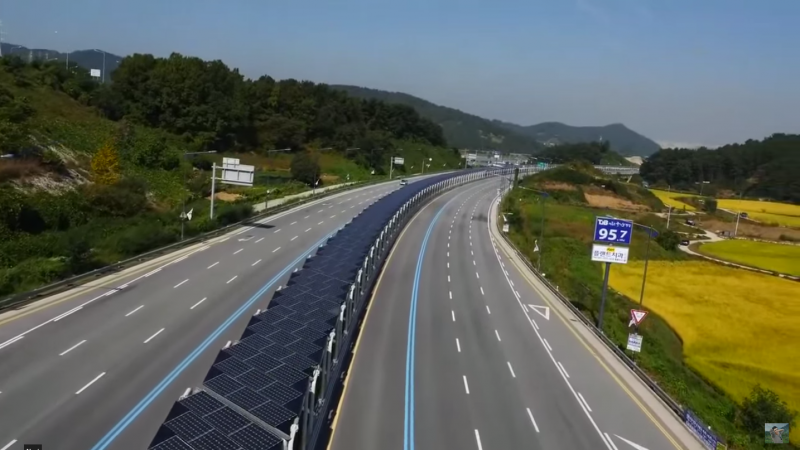 In September, when I described the Sustainable City in Dubai (September 10, 2019), I mentioned a smaller version of this concept. At the time, I was not yet familiar with the concept of solar roads so the Dubai version looked to me like a solar panel-shaded walkway. The internet description of the Korean road mentions that similar efforts can be extended to many bike lanes. A few years ago, my wife and I were directly involved in debates regarding efforts to cover New York City with bike lanes—another effort of the energy transition. New York Magazine focused on the perceived winners and losers in our particular neighborhood. Fortunately, we can now use social media as a communication channel for such experiments, such that each locality can discuss the proper balance between its future and its history.

Micha Tomkiewicz, Ph.D., is a professor of physics in the Department of Physics, Brooklyn College, the City University of New York. He is also a professor of physics and chemistry in the School for Graduate Studies of the City University of New York. In addition, he is the founding-director of the Environmental Studies Program at Brooklyn College as well as director of the Electrochemistry Institute at that same institution.
View all posts by climatechangefork →
This entry was posted in Electricity, Energy, Sustainability and tagged Bike Lane, China, Dubai, dutch, Electricity, Energy, energy transition, France, Hungary, Korea, Netherlands, New York, Normandy, NYC, polar bear, Solar, solar panel, solar road, tech, Technology, Transition, US. Bookmark the permalink.

1 Response to Solar Roads: Driving Into the Future