How to Use COVID-19 to Make your Workplace Greener

Posted on June 30, 2020 by climatechangefork 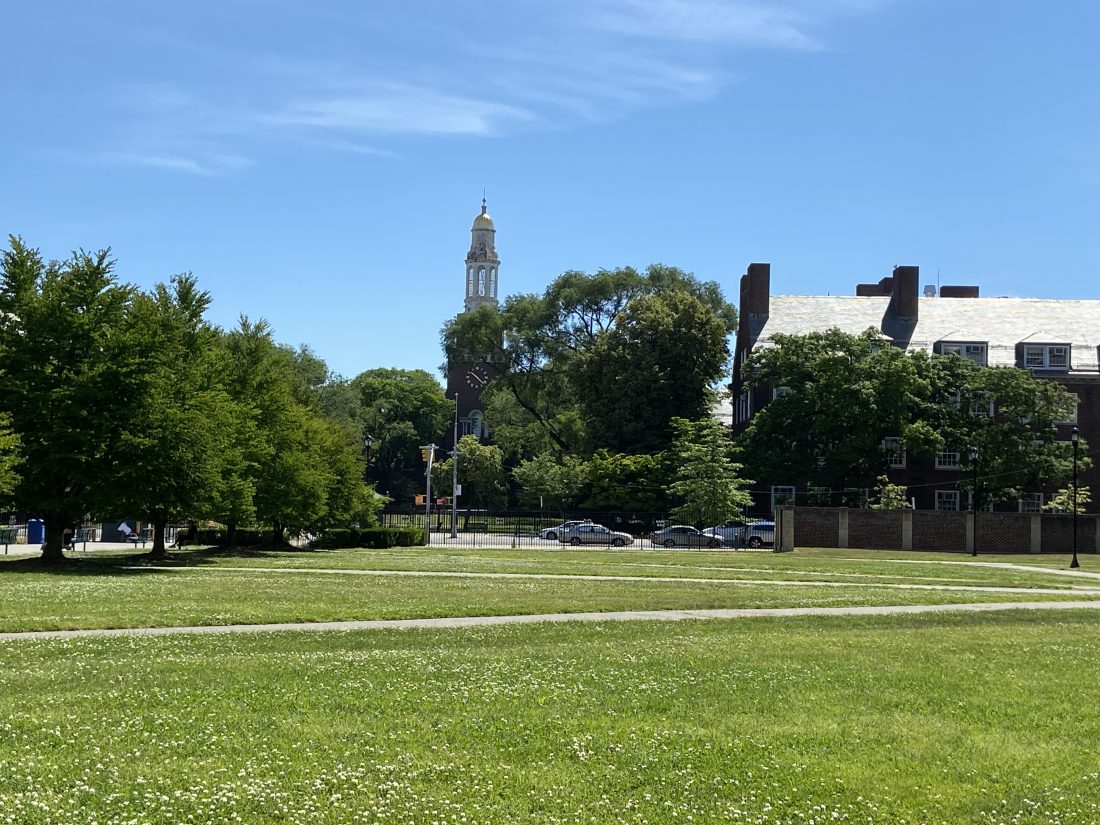 The “lonely” Brooklyn College in June

This is the beautiful campus where I teach. There are almost no students; it looks lonely. Granted, I took the photograph on Sunday, June 21st, a day when the campus likely wouldn’t look much different under ordinary circumstances. It was the first time that I visited since the beginning of lockdown in mid-March. Like most schools in the country, Brooklyn College is still in lockdown; we can expect to see a similar picture through at least the beginning of the fall semester. Over this period, we will continue with distance teaching/learning. We are definitely getting better at it—both on the students’ part and that of the faculty. But the experience is different—all of us miss the mix of formal and informal interactions with each other that are an essential part of the college experience.

The NYT thinks this might become the new normal. Its article, “’We Could Be Feeling This for the Next Decade’: Virus Hits College Towns,” predicts some long-term impacts that the pandemic will have on college campuses.

Today, I would like to do something somewhat rare: emphasize an important advantage of this new reality.

In previous blogs (June 4–18, 2019) I described New York City and State’s detailed legislation regarding how to bring the state to carbon neutral by mid-century. This goal approximately conforms with the Paris agreement’s commitment to limit climate change to a temperature rise of 2oC by that time. My June 18, 2019 blog outlined my suggestions about how Brooklyn College (and other institutions) could use these requirements as a teaching moment for its students. By incorporating our students in our implementation of this transition, we could impart certain experiences that might be marketable in their post-graduation job searches.

Meanwhile, the COVID-19 pandemic and resulting lockdown have provided us with a unique opportunity to directly differentiate between student-driven and infrastructure-driven energy use on campus. This opens the door for a more detailed understanding of how we can reduce the energy needed to serve the same student population.

As I mentioned in the June 2019 blogs, NY State and City regulations do not directly target schools. Rather, they tackle buildings, businesses, transportation, and other large energy users. The emphasis is on carbon emissions. The two main tools to achieve the desired reductions in carbon emissions are: reducing the amount of energy used and transitioning the sources of that energy to non-fossil fuel sources (solar, wind, hydro, nuclear, etc.).

In other words, simply replacing energy sources and updating the corresponding storage capacity is not the full answer. We must also examine how we use energy, especially if that comes in the form of electricity use. Our energy saving should directly scale with our number of users. COVID-19 and the resultant shutdowns give us an important reference for how much energy we use to support the infrastructure with almost no individual users.

The not so simple solution that is emerging—which will be the focus of my next semester—is localizing the electricity infrastructure and limiting energy use to absolute essentials. We can achieve this in part by more extensively incorporating microgrids into our local electrical sourcing.

I have written extensively on microgrids throughout the more than 8 years of this blog. You can search for the term for previous entries.

Microgrids are not new to CUNY. I have outlined their general definition as well as explained how they relate to my school. From the July 2, 2019 blog:

Electrical systems that can connect and communicate with the utility grid that are also capable of operating independently using their own power generation are considered microgrids. Single buildings or an entire community can be designed to operate as a microgrid. Microgrid infrastructures often provide emergency power to hospitals, shelters or other critical facilities that need to function during an electrical outage. Microgrids can include conventional distributed generators (i.e. diesel or natural gas gensets), combined heat and power (CHP), renewable energy such as PV, energy storage, or a hybrid combination of technologies. If inverters are used, such as for a resilient PV system, they must be able to switch between grid-interactive mode and microgrid (intentional island) mode in order to operate as a microgrid. For large microgrid systems that include distributed energy resources (DER), a supervisory control system (a system that controls many individual controllers) is typically required to communicate with and coordinate both loads and DER.

Obviously, CUNY is not the only institution interested in microgrids. A piece from the Journal of Higher Education from January 2018 summarizes the more general attention:

The Department of Energy defines a microgrid as: “a local energy grid with control capability, which means it can disconnect from the traditional grid and operate autonomously. A microgrid, for the most part, operates while connected to the traditional grid but can break off, or island itself, and operate on its own. It can be powered by distributed generators, batteries and renewable sources.”

Essentially, these energy systems are capable of balancing captive supply and demand resources to maintain stable service within a defined boundary.

… Schools such as UC San Diego, MIT, Montclair, Princeton, and Santa Clara University, have stepped up to the call for greater resiliency. Although the microgrid industry is relatively young, it’s popularity is growing in higher ed …

Resiliency is another huge draw for universities, especially in the wake of Hurricane Sandy in 2012, and most recently, the devastation from Harvey, Irma, and Maria.

Brief brownouts, let alone blackouts, are highly detrimental in the event of extreme weather, where universities are looked upon to be strongholds for the community. The threat of cyber attacks is yet another push. The ability to operate independently from the central power grid is invaluable in the face of disaster, as proved by Princeton’s resilient response while half a million people lost power during Superstorm Sandy.

I have also looked into how certain developing countries are using microgrids:

The film illustrates the initial delivery of electricity in the small town of Gosaba. This delivery comes by way of a microgrid that runs through some of the main streets in town. Here, the microgrid doesn’t function as an additional, supplemental aspect of the main grid. In fact, since in this case, the microgrid is the only grid, in a sense, it resembles the main grid in the US more than 100 years ago.

My school has collected some preliminary data on our use of electricity during COVID-19 shutdowns. I will try to analyze these in next week’s blog and draw some conclusions about applying the methodology in the larger context of more general applications outside of the home.