Godwin’s Law and Us

Posted on January 19, 2021 by climatechangefork

This is a follow up to my “Shame” blog about the president-triggered mob attack on the American government in Washington, DC on January 6th. The attack was one part of a series of efforts to void the November 3rd election results; it was not an isolated event. What happened on January 6th was probably the lowest point in terms of violence, target (the American government), and perpetrators (it was sparked by language from the president) but it came as a reflection of general unrest. We have seen the fruits of this unrest largely in the form of massive demonstrations—some peaceful, some violent—many in response to government decisions. These demonstrations protested: government mitigation methods against the impacts of COVID-19, the election results (in both the US and Belarus), and police brutality, among other issues. Timothy Snyder wrote an excellent, if biased, historical essay about Trump, conspiracy, and fascism in the US.

Many participants in these demonstrations expressed the issues as a matter of ultimate good (e.g., God) vs. evil (e.g., Nazi Germany). I am not an authority on the religious references but I know something about Nazi Germany. This week I’m looking at visual, written, and verbal Nazi analogies. My next blog will be my perspective of which of these analogies actually hold sway.

Some circles point to the many Nazi analogies as being classic examples of Godwin’s law. I mentioned Godwin’s law in an earlier blog (December 27, 2016) in the context of divestment from fossil fuel companies. I feel it is high time to return to this topic.

Godwin’s law, short for Godwin’s law (or rule) of Nazi analogies,[1][2] is an Internet adage asserting that “as an online discussion grows longer, the probability of a comparison involving Nazis or Hitler approaches 1“.[2][3] That is, if an online discussion (regardless of topic or scope) goes on long enough, sooner or later someone will compare someone or something to Adolf Hitler or his deeds, the point at which effectively the discussion or thread ends.

Promulgated by the American attorney and author Mike Godwin in 1990,[2] Godwin’s law originally referred specifically to Usenet newsgroup discussions.[4] He stated that he introduced Godwin’s law in 1990 as an experiment in memetics.[2] It is now applied to any threaded online discussion, such as Internet forums, chat rooms, and comment threads, as well as to speeches, articles, and other rhetoric[5][6] where reductio ad Hitlerum occurs.

In 2012, “Godwin’s law” became an entry in the third edition of the Oxford English Dictionary.[7]

Of course, not all of the demonstrators reflected the Nazi analogies that I describe here. I’m cherry picking, and I’m not the only one. Below is a good example, however, of the cross reference between COVID-19, and Nazism. The woman’s sign affirms that the US is not Nazi Germany, then lists the social-distancing steps mandated by the government, concluding that such measures amount to tyranny. However, the demonstrators are not asking themselves why they find these particular mandates to be unacceptable while they have no qualms about other rules. The same group, for instance, does not protest the legal status of walking around naked, or for women, bare-breasted. This is likely because they are already used to such mandates. The newness of mask-wearing rules is what has prompted calls of tyranny. 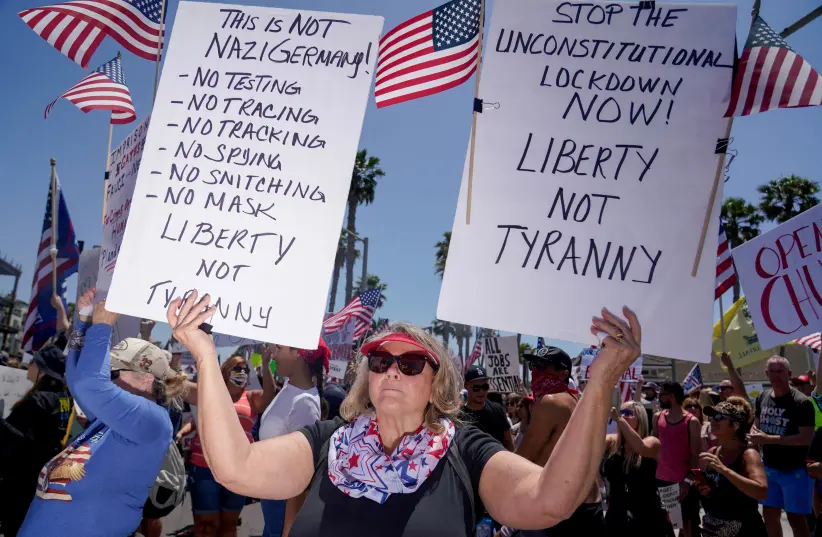 Huntington Beach, California demonstration against government-recommended (or mandated) steps to combat the impact of COVID-19

The next photo shows demonstrators in North Carolina, referencing both God and QAnon, calling for a reopening of the economy.

Demonstrators in North Carolina in April 2020

The photo below comes from a similar demonstration but features more explicit imagery. There are some questions as to the origin of the symbolism in this particular photo: whether it marks a proclamation from Trump/Pence supporters that they agree with the Nazi party or whether it is instead an accusation of such an alliance. 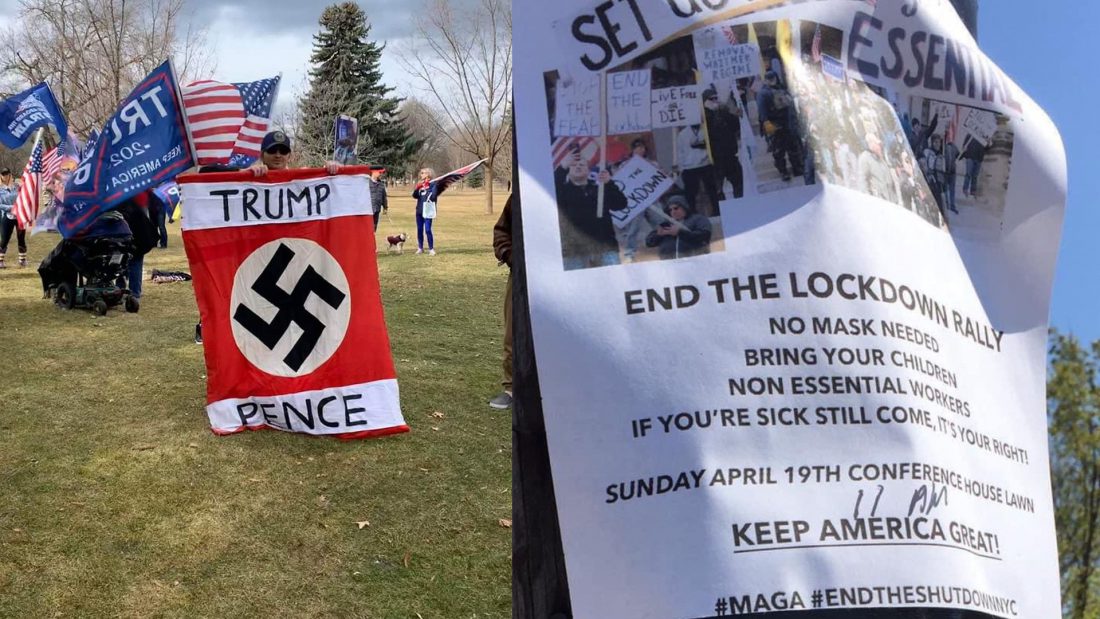 A demonstration with more explicit, though questionable, messages

Another picture outpaces the previous ones. It shows a COVID-19 demonstration that directly blames the Jewish governor of Illinois for all the troubles Illinoisans are facing. The antisemitic sign is held side by side with one warning that we are in a dry-run for communism. This argument directly mimics the birth of the Nazi party; its founders blamed the ills of the world on Judeo-Bolshevism.

This particular demonstration got the unique dishonor of being denounced by the Auschwitz memorial and museum, which stands on the site of the Nazi’s worst death camp. 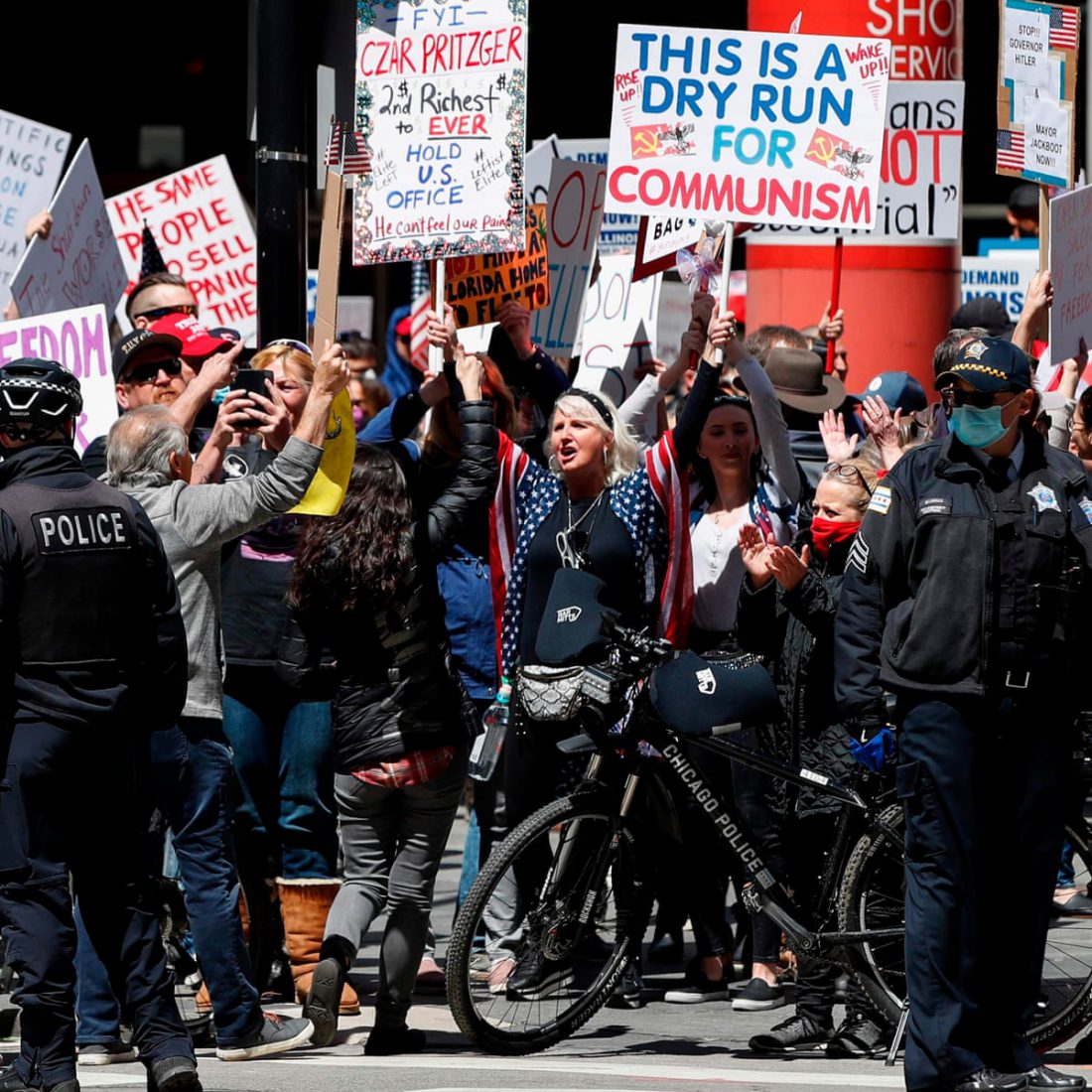 One of the members of the January 6th mob wore a sweatshirt mocking the pain and death of that horrific institution. 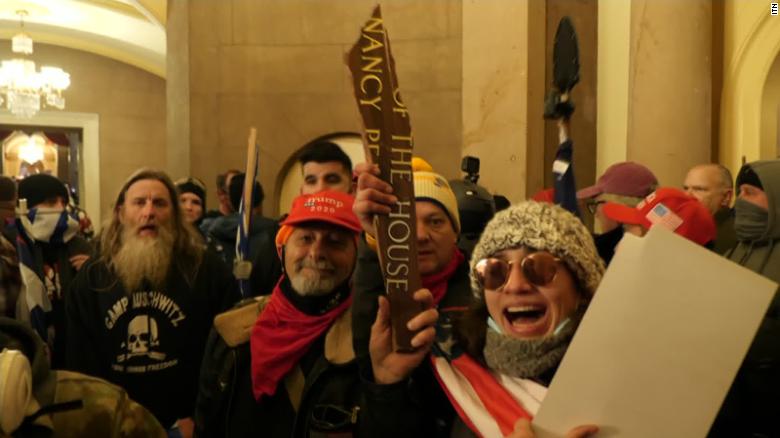 Aljazeera published one of the most striking examples of an American association with Nazism. The picture shows a demonstration in Charlottesville, Georgia, two years before COVID-19 struck and almost three years before the 2020 presidential election. 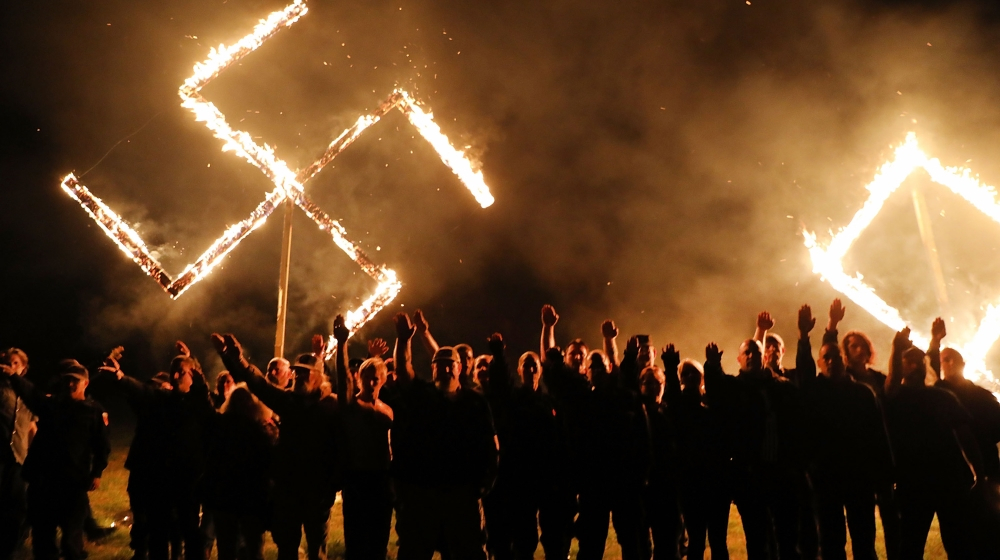 Members of the National Socialist Movement, one of the largest neo-Nazi groups in the US, hold a swastika burning after a rally in 2018 in Georgia [File: Spencer Platt/Getty Images/AFP]

Clearly, this country is not without legitimate fascist threats.

I will finish this blog with two non-pictorial reports that echo the link—one from England, the other from Arnold Schwarzenegger, the ex-governor of California.

Apparently, some extremist groups in England are encouraging their members to infect Muslims and Jews with COVID-19:

London (CNN)Neo-Nazis and far-right activists have been telling followers to “deliberately infect” Jews and Muslims with coronavirus, a UK government counterterrorism agency warned on Thursday, as extremists attempt to capitalize on the pandemic.

Since the beginning of the coronavirus pandemic, the UK’s Commission for Countering Extremism said it has received increasing reports of far-right, far-left and Islamist extremists exploiting the crisis to promote divisive, xenophobic and racist narratives “to sow division” and create social discord.

The commission said it had heard reports of misinformation and harmful propaganda across the ideological spectrum: Islamist groups were “propagating anti-democratic and anti-Western narratives,” claiming that Covid-19 is divine punishment on the West for alleged “degeneracy,” or punishment on China for the country’s treatment of Uyghur Muslims.

Meanwhile, Arnold Schwarzenegger, who was born in July 1947 in Austria and moved to the US in 1968, tweeted a video likening the January 6th mob attack on the US Capitol to Kristallnacht (1938):

Former California Gov. Arnold Schwarzenegger posted a heartfelt video to Twitter on Sunday, recounting his childhood in Austria after World War II and denouncing the violent mob that overtook the U.S. Capitol on Wednesday.

The video, nearly eight minutes long and set to swelling music, starts by recalling Kristallnacht — or the Night of Broken Glass — an infamous night in 1938 when a mob of Nazi sympathizers stormed through Jewish neighborhoods in Germany, destroying thousands of businesses, rounding up Jewish men to be sent to concentration camps and killing dozens of people in the process. The night was named for the broken glass from Jewish homes and businesses that littered the streets, and it came to symbolize shattered Jewish lives.

“Wednesday was the day of broken glass right here in the United States,” Schwarzenegger says in the video, which by Sunday afternoon had been viewed nearly 12 million times. “The broken glass was in the windows of the United States Capitol. But the mob did not just shatter the windows of the Capitol. They shattered the ideals we took for granted. They did not just break down the doors of the building that housed American democracy. They trampled the very principles on which our country was founded.”

Micha Tomkiewicz, Ph.D., is a professor of physics in the Department of Physics, Brooklyn College, the City University of New York. He is also a professor of physics and chemistry in the School for Graduate Studies of the City University of New York. In addition, he is the founding-director of the Environmental Studies Program at Brooklyn College as well as director of the Electrochemistry Institute at that same institution.
View all posts by climatechangefork →
This entry was posted in Economics, Holocaust, politics and tagged antisemitic, antisemitism, attack, Auschwitz, charlottesville, communism, concentration camp, constitution, coronavirus, covid, COVID 19, demonstration, Economy, fascism, Georgia, Illinois, January 6, Jew, Jewish, liberty, lockdown, MAGA, mask, mob, Nazi, Nazi Trump Pence flag, pandemic, Pritzger, protest, QAnon, riot, rioter, social distance, swastika, Trump, tyranny, US, Washington DC, white supremacy. Bookmark the permalink.