Posted on March 16, 2021 by climatechangefork 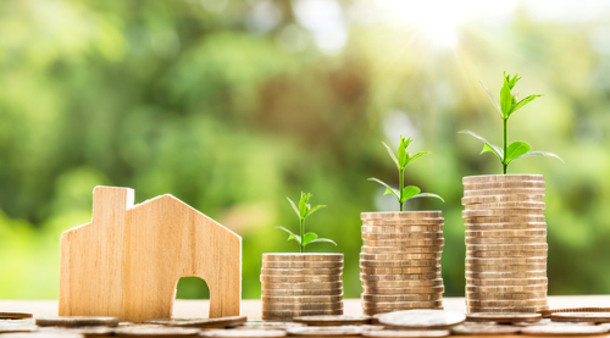 On December 27, 2016, I posted a blog, “Impact Assessment: Self-Inflicted Genocide and the Toronto Principle.” I cited an Op-Ed from Benjamin A. Franta:

Last December, a committee at the University of Toronto released a report on the issue of divestment, drawing a clear line by aligning itself with the needs of the Paris agreement. It recommended that the university not finance companies whose “actions blatantly disregard the international effort to limit the rise in average global temperatures to not more than one and a half degrees Celsius above pre-industrial averages by 2050…These are fossil fuels companies whose actions are irreconcilable with achieving internationally agreed goals.” This principle, basic as it is, aligns rhetoric and action. It suggests that it is all institutions’ responsibility to give life to the Paris agreement. Harvard could adopt this Toronto principle, too, and the world would be better for it.

In practice, adopting the Toronto Principle would likely mean moving investments away from coal companies and coal-fired power plants, companies seeking non-conventional or aggressive fossil fuel development (such as oil from the Arctic or tar sands), and possibly also companies that distort public policies or deceive the public on climate. At present, these activities are incompatible with the agreement in Paris.

Since then, the US Federal Reserve and other financial institutions have strongly recommended that every business decision that we make should account for the impact of climate change (see my January 14, 2020 blog). Many schools and other institutions have indicated that they want their investments to be “green” but what does that mean? We need a taxonomy of the term. Wikipedia gives us the basics on taxonomy:

Taxonomy is the practice and science of categorization or classification based on discrete sets.

A taxonomy (or taxinomical classification) is a scheme of classification, especially, a hierarchical classification, in which things are organized into groups or types.[1][2][3][4][5][6] Among other things, a taxonomy can be used to organize and index knowledge (stored as documents, articles, videos, etc.), such as in the form of a library classification system, or a search engine taxonomy, so that users can more easily find the information they are searching for. Many taxonomies are hierarchies (and thus, have an intrinsic tree structure), but not all are.

In other words, taxonomy sorts things into groups and subgroups based on shared characteristics. Now for the often-posed question: where/how can I invest so as to be able to label my investments as “green”? The Climate Bonds Initiative (CBI) released a comprehensive document in January regarding the sustainability of various industries:

The Climate Bonds Taxonomy identifies the assets and projects needed to deliver a low carbon economy and gives GHG emissions screening criteria consistent with the 2-degree global warming target set by the COP 21 Paris Agreement. It has been developed based on the latest climate science including research from the Intergovernmental Panel on Climate Change (IPCC) and the International Energy Agency (IEA), and has benefited from the input of hundreds of technical experts from around the world. It can be used by any entity looking to identify which assets and activities, and associated financial instruments, are compatible with a 2-degree trajectory. First released in 2013, the Climate Bonds Taxonomy is regularly updated based on the latest climate science, emergence of new technologies and on the Climate Bonds Standard Sector Criteria.

The Taxonomy is the foundation used by the Climate Bonds Initiative to screen bonds to determine whether assets or projects underlying an investment are eligible for green or climate finance. Where detailed analysis of a sector has been undertaken and specific eligibility Criteria have been developed, bonds in that sector can be Climate Bonds Certified. This is indicated via a blue ‘Climate Bonds Certification tick’. Where detailed sector based Criteria for Certification are still under development, this is indicated by a yellow circle. In this case, bonds in this sector cannot yet be certified under the Climate Bonds Standard. 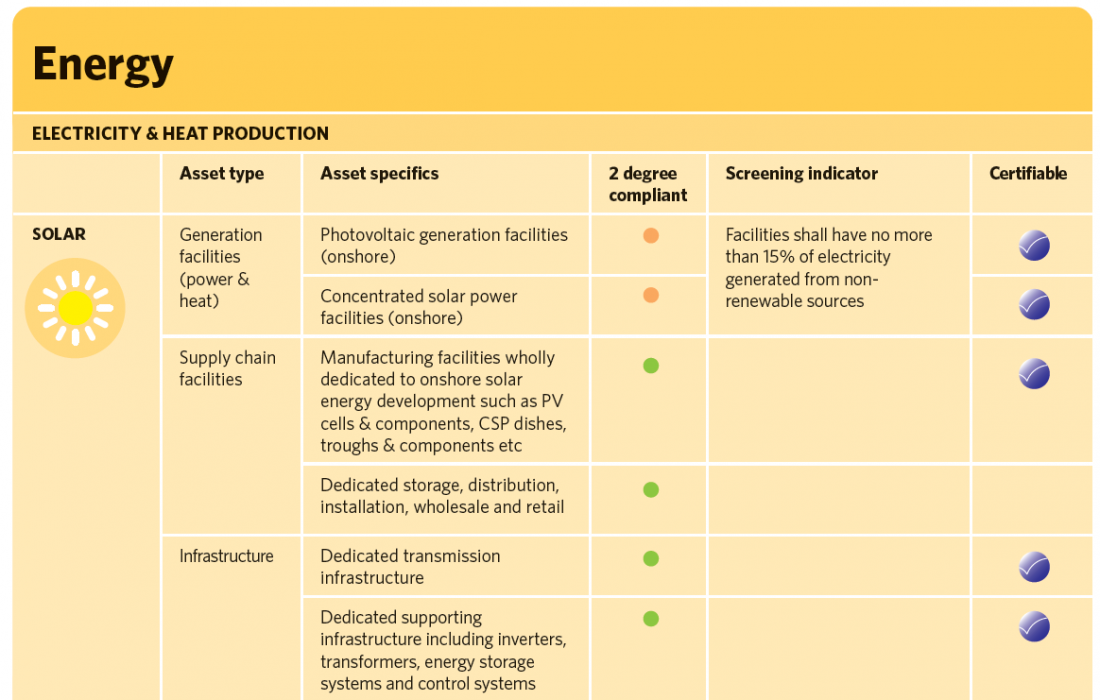 A traffic light system has been adopted to indicate whether identified assets and projects are considered to be automatically compatible with a 2-degree decarbonisation trajectory. Green Light is automatically compatible. Orange Light is potentially compatible, depending on whether more specific criteria are met. Red Light is incompatible. A Grey circle is used to indicate where further work is required to determine which traffic light colour is appropriate for a specific sub-set of assets or activities.

The figure above shows the first segment of the Energy category within the document, specifically the beginning of the Electricity and Heat group and the Solar subgroup. Other subgroups in this group include Bioenergy, Wind, Geothermal, Hydro Power, Marine Renewables, Fossil Fuels, and Nuclear Energy. The categories of Transportation, Water Infrastructures, Buildings, Land Use and Marine Resources, Industry, Waste and Pollution Control, and Information and Communication Technologies have similar taxonomies.

This kind of taxonomy has inconsistencies, however, especially when it comes to determining whether something is “green.” Just look at the case of electric passenger cars in the Transportation category. They got a green traffic light in the CBI document, indicating full compatibility with limiting the rise of global temperature to below 2oC, as advocated by the Paris Agreement. As I wrote in my March 12 and 19, 2019 blogs, however, while the idea of electric cars is great, they are only as “green” as their power sources. If they continue running on energy sourced from fossil fuels, electric cars just keep contributing to the same pollution as gas guzzlers. Similar connectivity holds true for many other entries in the CBI Taxonomy. The practice of taxonomy is great in helping us visualize anchors and connections, if not particularly helpful in describing them.

You can see an example of simple taxonomy just by looking at the “Category” section on the right side of this blog. The advantage here is that every entry in this list has a live link to the corresponding posts. However, as is often the case, the categorization is incomplete, failing to account for many of the issues that I have covered. So, if you want to know what the blog is about, you have two options: read it all the way through or randomly choose posts until you find some sense of consistency.

The NYT opinion piece, “The Secret Life of a Coronavirus” delves further into the difficulties in categorizing viruses, animals, and other “live” things.

Micha Tomkiewicz, Ph.D., is a professor of physics in the Department of Physics, Brooklyn College, the City University of New York. He is also a professor of physics and chemistry in the School for Graduate Studies of the City University of New York. In addition, he is the founding-director of the Environmental Studies Program at Brooklyn College as well as director of the Electrochemistry Institute at that same institution.
View all posts by climatechangefork →
This entry was posted in Climate Change, Electric Cars, Energy, Sustainability and tagged bonds, Carbon, classify, Climate Change, CO2, CO2 emissions, COP21, coronavirus, covid, decarbonization, electric car, Electricity, Emissions, Energy, Global Warming, green, IEA, Investment, IPCC, Paris, Paris Agreement, Pollution, Solar, taxonomy, Toronto. Bookmark the permalink.