Posted on March 15, 2022 by climatechangefork

The Age of Oil started around 1800, when drilling techniques started to become available to extract oil from the ground. Figure 1 shows the oil price changes normalized to a constant US$ (2014) from the American Civil War until 2015. Global events that had direct impact on the price are superimposed on the graph. Figure 2 shows the changes in the price of oil over the last year and the impacts of two such global events: COVID-19, and Russia’s attack on  Ukraine. Figure 1 also shows oscillatory behavior of peaks and valleys and stable periods when prices stay relatively low. The fluctuations in oil prices are a constant topic on this blog. (Just put “peak oil” in the search box to examine the issue). The title of this blog asks the question – is today’s behavior any different? 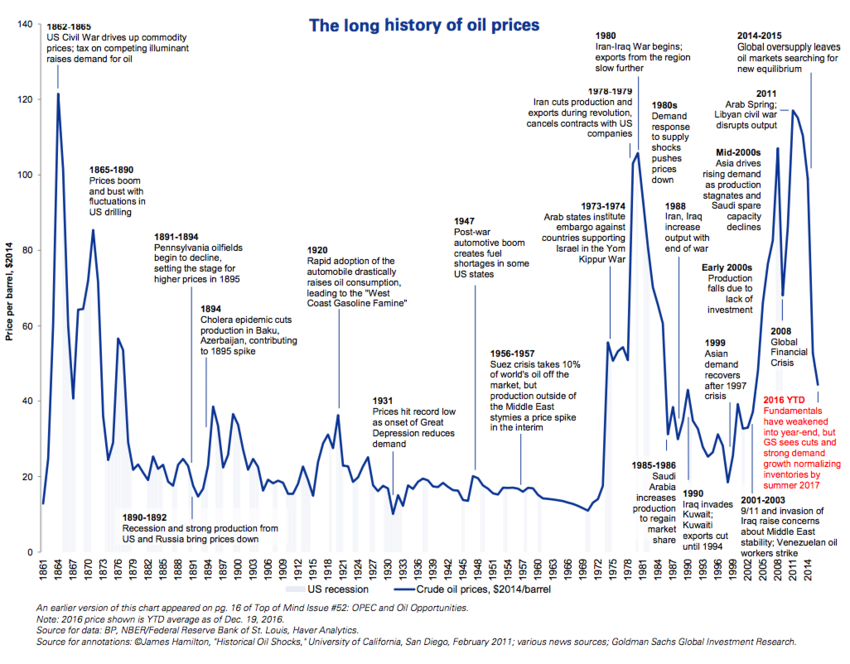 As Figure 2 shows, the recent rise in oil prices started well before Russia’s invasion of Ukraine and even before the threat of invasion started around November of last year. It was driven first by the COVID-19-related difficulties of adjusting global supply and demand, then strongly accelerated after the invasion. 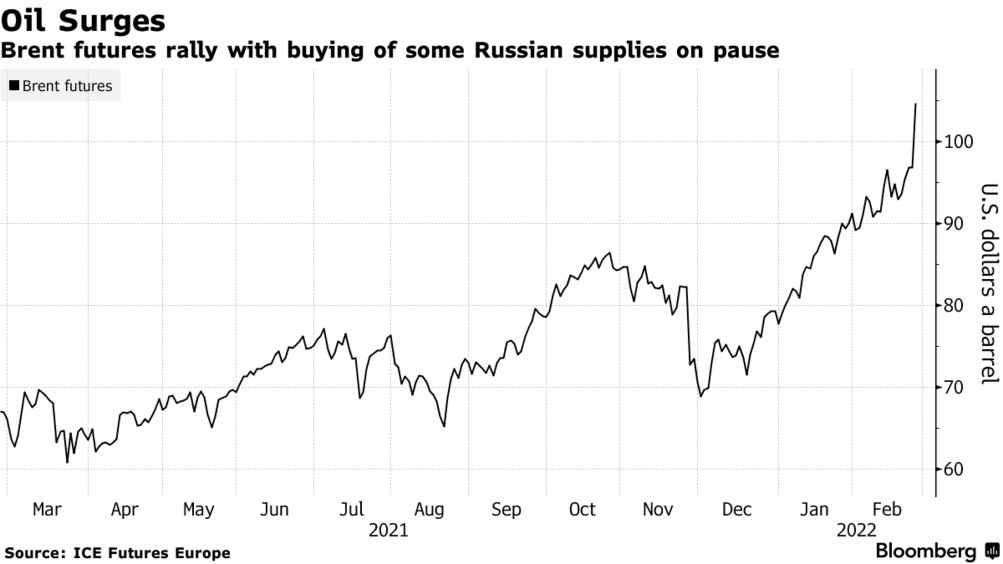 Below is a piece written on the issue before the invasion that basically raises the same question that I am asking in this bog: are the increases self-limiting or open-ended?

“The only way to balance this market over the medium term remains high oil prices to slow demand growth,” analysts at Energy Aspects wrote in a note to clients this week cited by Bloomberg.

Bringing more supply, on the other hand, is now more challenging than before the pandemic. ESG issues and the energy transition for the international majors, as well as the new-found and still-largely-holding capital discipline of U.S. shale producers, combine with supply chain bottlenecks, labor shortages, and cost inflation. $100 oil could unleash a lot more U.S. oil production, in theory, but supply chain constraints and record-high frac sand prices are likely to temper growth, analysts at Rystad Energy say.

However, a few days after the invasion, it became clear that the present increase is not only driven by COVID-19 difficulties in the supply chain. Rather, they relate to a strong attempt by most of the world’s countries to slow the Russian attack on Ukraine. As I mentioned in a blog last month (February 8, 2022), Russia is a petrostate with an economy strongly dependent on energy exports. Meanwhile, Europe’s economy relies heavily on energy supply from Russia. Boycotting Russian energy exports is bound to have a strong and complex impact on the global economy.

There are a few options for mitigating the major changes that are now taking place in the global energy supply:

Options 2 and 3 are consistent with ongoing attempts to mitigate climate change, but option 1 is not.

Price increases are the natural economic way to shift the energy use in all three directions without policy interventions. It looks like all three mechanisms are now playing a role, with price increases probably dominant among them.

Hopefully, in future blogs, we will be better able to answer the title question of this blog and I will examine in some detail the present disruption’s impacts on our energy use. In this blog, I will mostly refer to early comments of some published opinions on these issues.

MILAN, Feb 28 (Reuters) – Shares in European renewables companies rallied in turbulent markets on Monday on bets that the region would accelerate transition towards alternative sources of energy as governments seek ways to reduce reliance on Russian gas imports.

Shares in Nordex (NDXG.DE), Vestas Wind (VWS.CO), Siemens Gamesa (SGREN.MC), Orsted (ORSTED.CO) and EDP Renovaveis (EDPR.LS) rose by between 5% and 12% as investors sought bigger exposure to the sector ahead of top-level discussions in Europe on energy security.

“Policy changes in Germany and the spike in natural gas prices following recent events could now lead to a step change in how Europe, especially Germany, accelerates renewable energy plans that are currently behind schedule in many countries,” Citi analysts wrote in a note on Monday.

Effect of Renewables on Grid Stability:

Contemporary proliferation of renewable power generation is causing an overhaul in the topology, composition, and dynamics of electrical grids. These low-output, intermittent generators are widely distributed throughout the grid, including at the household level. It is critical for the function of modern power infrastructure to understand how this increasingly distributed layout affects network stability and resilience. This paper uses dynamical models, household power consumption, and photovoltaic generation data to show how these characteristics vary with the level of distribution. It is shown that resilience exhibits daily oscillations as the grid’s effective structure and the power demand fluctuate. This can lead to a substantial decrease in grid resilience, explained by periods of highly clustered generator output. Moreover, the addition of batteries, while enabling consumer self-sufficiency, fails to ameliorate these problems. The methodology identifies a grid’s susceptibility to disruption resulting from its network structure and modes of operation.

However, not everyone agrees that the shifts accelerate the energy transition away from fossil fuels:

The surge in crude oil prices past $100 a barrel has raised a big question: Will this latest spike in the notoriously volatile oil market help to speed the global transition from fossil fuels to cleaner energy sources to fight climate change?

The answer is probably not.

On the one hand, energy analysts say, soaring prices for gasoline, diesel and other products made from crude oil will drive cost-conscious consumers more quickly into electric vehicles and boost investment in competing clean technologies like hydrogen.

But at the same time, these high prices will also drive more drilling of oil and gas around the globe, as fossil fuel companies rush to cash in, sowing the seeds for the boom to turn to bust. That will make oil abundant and affordable again.

That is a pattern that the world has seen repeatedly in the oil age, and one that has punished clean energy investors harshly in the past.

US to Push More Drilling at Home:

“As crisis looms in Ukraine, U.S. energy leadership is more important than ever,” the American Petroleum Institute, the powerful industry lobby group, wrote on Twitter with a photo that read: “Let’s unleash American energy. Protect our energy security.”

The crux of the industry’s argument is that any effort to restrain drilling in America makes a world already reeling from high oil prices more dependent on oil and gas from Russia, a rival and belligerent fossil fuel superpower.

The industry’s demands have focused on reversing steps the Biden administration has taken to start reining in the production of fossil fuels, the main driver of climate change.

Arguments in the Organization of the Petroleum Exporting Countries (OPEC):

With the price of a barrel of oil soaring, the group of oil producers known as OPEC Plus declined to take steps to cool the market at its monthly meeting on Wednesday.

In a statement that had surreal qualities given the surging prices in recent weeks, the group, which includes Russia, said current fundamentals and the outlook for the future pointed “to a well-balanced market.”

It blamed “volatility” on “geopolitical developments” — in other words, Russia’s onslaught in Ukraine.

Some analysts were not impressed. “Such an argument will increasingly strain credulity,” Helima Croft, an analyst at RBC Capital Markets, an investment bank, wrote in a note to clients.

Adjustments in the European Unionw

BRUSSELS (AP) — The European Union is seeking to fully phase out its dependency on Russian energy “well before 2030” to ensure the 27-nation bloc no longer faces difficult decisions about hurting their own economies in geopolitical crises like the invasion of Ukraine.

The EU leaders meet in Versailles outside Paris for a two-day summit starting Thursday and will be working on ways to reduce their dependency on Moscow for fossil fuels.

“We agreed to phase out our dependency on Russian gas, oil and coal imports,” said a draft of the summit declaration seen by The Associated Press.

At the same time, the European Commission already has proposals to make it happen. The EU’s executive arm said its measures “can reduce EU demand for Russian gas by two-thirds before the end of the year” as a first

I will go back to the title, where I ask whether “peak oil” is self-limiting or open-ended. Answering this involves trying to predict the future and the future now is complicated. We can predict some of the components: climate change is not self-limiting but it can be limited by our collective mitigation efforts to de-carbonize the atmosphere. The timing depends on our mitigation efforts, as measured in generations. COVID-19 is on its way out. The big unknown is the endgame of the Russian-Ukrainian conflict, which is now having major impacts on energy availability. My next blog will try to come up with some answers.

However, with a nation of 45 million being destroyed by its more powerful neighbor that has, so far, resulted in more than 2.5 million (and growing) mostly women and children, forced to escape the country and flooding into the rest of Europe, we shouldn’t worry too much about the price increase of gasoline.

Micha Tomkiewicz, Ph.D., is a professor of physics in the Department of Physics, Brooklyn College, the City University of New York. He is also a professor of physics and chemistry in the School for Graduate Studies of the City University of New York. In addition, he is the founding-director of the Environmental Studies Program at Brooklyn College as well as director of the Electrochemistry Institute at that same institution.
View all posts by climatechangefork →
This entry was posted in Russia/Ukraine, Sustainability and tagged alternative energy, availability, covid, COVID 19, Demand, drilling, economic, Economy, electric grid, Energy, energy intensity, EU, Europe, fluctuation, Gasoline, GDP, Germany, Growth, impact, invasion, Oil, OPEC, power grid, prices, renewables, Russia, Supply, Ukraine, US. Bookmark the permalink.