The Sky as an Inspiration

Posted on July 5, 2022 by climatechangefork 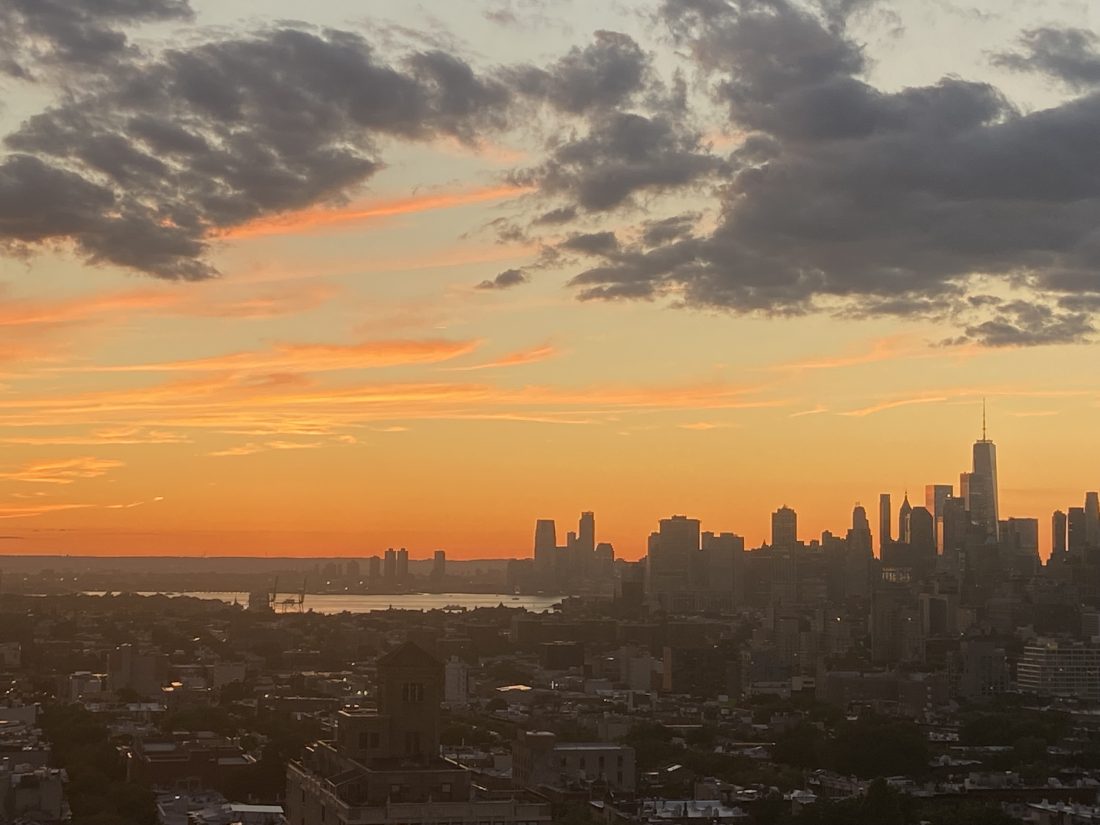 A week ago, I got a new email from a young friend, reacting to the recent verdict by the Supreme Court that negates Roe vs. Wade, which has defined the abortion landscape for the last 50 years:

I was reading about roe v wade. Feel like it’s going to create a lot of logistical problems for women who need to get an abortion for legitimate reasons (ectopic pregnancies, etc.). Perhaps the Supreme Court was considering the economic impact of the declining fertility rate in our country.

The life-tenured conservative majority that now leads the Supreme Court was just warming up. Next, they decided that the long-standing New York State law that requires a special license to carry arms in public places is unconstitutional, in spite of the major increase in mass-killings in schools and other public places. The Court also decided that people with authority can force public prayers at events under their control. After that, they ruled that the president and Executive Branch have only limited authority to enforce greenhouse gas emissions limits for electrical utilities. This decision will seriously hinder our ability to fight climate change. At the same time, we are still dealing with the global impacts of issues that are not directly connected to Supreme Court decisions, such as the Russian invasion of Ukraine and its impact on energy inflation (see last week’s blog), as well as COVID-19 and general inequality.

My first order of business in confronting these issues is to separate global ones from national ones. Such a determination, obviously, will help us narrow down who to blame for our problems and what can we do to be less miserable.

Everybody around me is depressed. I have written a great deal about the impacts of global issues including Russia’s invasion of Ukraine, declining fertility, COVID-19, and climate change (just put any of these terms in the search box). Until now, I hadn’t written anything about the Supreme Court because it was off-topic but that is no longer the case. Because of the dominant global position of the United States, the lifetime tenure of the justices determines almost all aspects of our national reality, and through us they have large impact on the rest of the world.

In the middle of all of this, I looked at the sky for inspiration. For a short period of time, the “fight” between the dark clouds and the still sunny ones that covered my city seemed to me, the right analogy. I took the picture that is shown at the top of this blog. I knew who would “win” that battle – night always takes over after day. What, then, will the future hold for all of us???

If we look closely, many of the Court’s recent decisions didn’t make any direct judgments about the issues on which they decided to address. Instead, they were saying that it is not their business to decide, and shunting the responsibility back to the “people,” saying we should decide such matters through elected representatives. The one big exception to this argument was its ruling about the requirement for special permissions for New Yorkers to carry weapon in public places. Here, the Supreme Court decided that the elected representatives of New York who voted on this law contradicted the Second Amendment of the American Constitution, thus making these laws invalid. To understand this reasoning, we should examine the relevant part of the Second Amendment:

A well regulated Militia, being necessary to the security of a free State, the right of the people to keep and bear Arms, shall not be infringed.

It is basically one sentence. Its interpretation over the years has rested primarily on different interpretations of one word: people. Does this word refer to every person? or alternatively to a nation or state, as in, “We the people….” To rephrase the question, does the right to bear arms refer to us as individuals or does it refer to the state in a way that separates the current, sovereign state from its colonial past? Over the last generation, this issue has become highly politicized, and the current version of the Supreme Court just ruled in favor of the “individual” interpretation. Even so, they have tried, in every decision that relates to this issue, to argue that legislators can limit both the individuals who are allowed to carry arms and the locations where they can do so.

The Court’s other monumental new decisions, including the reversal of Roe vs. Wade and restrictions to the Environmental Protection Agency (EPA), make statements about separation of powers between the three independent branches that govern the Republic (legislative, judicial, and executive):

separation of powers, division of the legislative, executive, and judicial functions of government among separate and independent bodies. Such a separation, it has been argued, limits the possibility of arbitrary excesses by government, since the sanction of all three branches is required for the making, executing, and administering of laws.

This action was always political and as such, in democratic countries, is always determined by voters. A valid question is who has the last say? In a Constitutional Democracy, the constitution is the ultimate authority:

CONSTITUTIONAL DEMOCRACY is the antithesis of arbitrary rule. It is democracy characterized by:

My last blog tried to analyze the balance between the top-down and the bottom-up efforts that are now taking place to fight inflation, with a particular emphasis on energy inflation. Time will tell how effectively these efforts will be. In democracies, much of the power is bottom-up: that of the individual citizens. However, plenty of examples from all over the world are emerging that show those in power (top-down) are working to find ways to manipulate those at the bottom so they can hold onto their institutional leadership and power.

Modern communication technology contains a great deal of resources to facilitate such manipulation. The New York Times recently provided a good example when it exposed the use of these technologies in China:

‘An Invisible Cage’: How China Is Policing the Future The more than 1.4 billion people living in China are constantly watched. They are recorded by police cameras that are everywhere, on street corners and subway ceilings, in hotel lobbies and apartment buildings. Their phones are tracked, their purchases are monitored, and their online chats are censored.

Now, even their future is under surveillance.

The latest generation of technology digs through the vast amounts of data collected on their daily activities to find patterns and aberrations, promising to predict crimes or protests before they happen. They target potential troublemakers in the eyes of the Chinese government — not only those with a criminal past but also vulnerable groups, including ethnic minorities, migrant workers and those with a history of mental illness.

So, I know how the sky will turn out after my beautiful sunset. My ability to guess the next step in my human landscape is much more complicated. The only thing we can do is to do what we can and hope for the best. Meanwhile, I hope that you all had a great 4th of July.

2 Responses to The Sky as an Inspiration