Posted on October 18, 2022 by climatechangefork

My previous blog cited a long 2016 report by the National Academy that outlines two classes of mechanisms used for climate events to assess the likelihood of attributions to climate change:

Event attribution approaches can be generally divided into two classes: (1) those that rely on the observational record to determine the change in probability or magnitude of events, and (2) those that use model simulations to compare the manifestation of an event in a world with human-caused climate change to that in a world without. Most studies use both observations and models to some extent—for example, modeling studies will use observations to evaluate whether models reproduce the event of interest and whether the mechanisms involved correspond to observed mechanisms, and observational studies may rely on models for attribution of the observed changes.

Below that paragraph, I showed a table from the same report that illustrated the state of understanding of various extreme consequences of climate change. These were grouped into three relevant categories:

In all three categories, the only events for which the paper claimed to have a high degree of understanding were extremely high and low temperatures. Amid the fires, droughts, extreme storms, etc., the report’s table doesn’t even mention floods as a distinctive category.

Plenty of work remains for us to quantify the understanding of climate change’s impact on these extreme weather phenomena. In future blogs, I will try to describe in more detail some of the difficulties involved in quantifying such attribution.

This blog is focused on two relevant aspects: Attribution to anthropogenic (human-caused) to global extreme climate events and a distinction between chaotic systems, on which physics teaches us that initial conditions for such events cannot be determined, and anthropogenic attributions to such events.

I have repeatedly discussed anthropogenic attributions to global extreme climate events in previous blogs. The two that are most relevant are the following:

“Doomsday: Attributions,” from October 3, 2017, deals with the modeling of human influence on the global temperature from the beginning of the 20th century and the decline of the radioactive isotope carbon-14 in the atmosphere over that time—an indicator that burning fossil fuels is culpable of that change.

“The Little Ice Age,” from April 16, 2019, shows the reconstructed global temperature change from the beginning of the common era to the present day. This reconstruction shows a “hockey stick” shape: behavior with sharp temperature rises from the mid-20th century.

These data are such important evidence that they have convinced more than 90% of the world’s scientists about the post-Industrial Revolution climate change’s major human attribution. They also satisfy the two classes of observation outlined by the National Academy in last week’s blog. Figure 1 is repeated from the October 3, 2017, blog, showing the NASA simulation of the global temperature from the beginning of the 20th century.

The Oxford Language Dictionary defines chaos in the following way:

I will focus here on the first definition (I covered the second definition in my July 26, 2022 blog, “Creation”).

The argument: Climate is chaotic and cannot be predicted

‘Lorenz (1963), in the landmark paper that founded chaos theory, said that because the climate is a mathematically-chaotic object (a point which the UN’s climate panel admits), accurate long-term prediction of the future evolution of the climate is not possible “by any method”. At present, climate forecasts even as little as six weeks ahead can be diametrically the opposite of what actually occurs, even if the forecasts are limited to a small region of the planet.’ (Christopher Monckton)

Response (with repeating Monckton’s argument):    “One of the defining traits of a chaotic system is ‘sensitive dependence to initial conditions’. This means that even very small changes in the state of the system can quickly and radically change the way that the system develops over time. Edward Lorenz’s landmark 1963 paper demonstrated this behavior in a simulation of fluid turbulence, and ended hopes for long-term weather forecasting.”

However, climate is not weather, and modeling is not forecasting.

Although it is generally not possible to predict a specific future state of a chaotic system (there is no telling what temperature it will be in Oregon on December 21 2012), it is still possible to make statistical claims about the behavior of the system as a whole (it is very likely that Oregon’s December 2012 temperatures will be colder than its July 2012 temperatures). There are chaotic components to the climate system, such as El Nino and fluid turbulence, but they all have much less long-term influence than the greenhouse effect.  It’s a little like an airplane flying through stormy weather: It may be buffeted around from moment to moment, but it can still move from one airport to another.

Nor do climate models generally produce weather forecasts. Models often run a simulation multiple times with different starting conditions, and the ensemble of results are examined for common properties (one example: Easterling & Wehner 2009). This is, incidentally, a technique used by mathematicians to study the Lorenz functions.

The chaotic nature of turbulence is no real obstacle to climate modeling, and it does not negate the existence or attribution of climate change.

Chaos theory is an interdisciplinary scientific theory and branch of mathematics focused on underlying patterns and deterministic laws, of dynamical systems, that are highly sensitive to initial conditions, that were once thought to have completely random states of disorder and irregularities.[1] Chaos theory states that within the apparent randomness of chaotic complex systems, there are underlying patterns, interconnection, constant feedback loops, repetition, self-similarity, fractals, and self-organization.[2] The butterfly effect, an underlying principle of chaos, describes how a small change in one state of a deterministic nonlinear system can result in large differences in a later state (meaning that there is sensitive dependence on initial conditions).[3] A metaphor for this behavior is that a butterfly flapping its wings in Brazil can cause a tornado in Texas.

The simplest way to get a feeling for or understanding of chaos theory is to play with the logistic map:

The logistic map is a polynomial mapping (equivalently, recurrence relation) of degree 2, often cited as an archetypal example of how complex, chaotic behavior can arise from very simple non-linear dynamical equations. The map was popularized in a 1976 paper by the biologist Robert May,[1] in part as a discrete-time demographic model analogous to the logistic equation written down by Pierre François Verhulst.[2] Mathematically, the logistic map is written

where xn is a number between zero and one, that represents the ratio of existing population to the maximum possible population. This nonlinear difference equation is intended to capture two effects:

By varying the parameter r, the following behavior is observed:

Evolution of different initial conditions as a function of r

The result of all of this is shown in Figure 2: 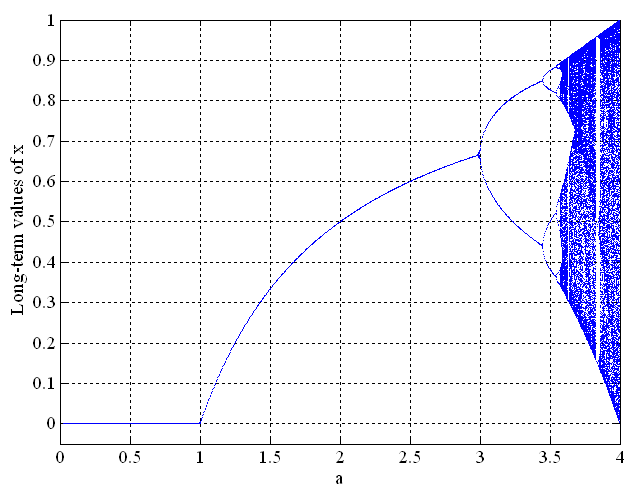 The easiest way to construct Figure 2 from Equation 1 is to put the values of the three parameters of Equation 1 into Excel and to take about 30 recurring values of x.

Figure 2 starts with a deterministic pattern and continues, independent of the initial conditions until the rate (r in Equation 1 or a in Figure 2) reaches the value of 3. As the value of the rate surpasses 3, it starts to bifurcate—first between two very different values, then between other values—into patterns that look completely random. In practice, this means that major population changes can follow the smallest changes in the initial conditions. If we are in that chaotic regime, we cannot trace our way back to where we started the process.

When we have an extreme weather event such as a fire or flood, we often look for a source that we can blame. This might satisfy our instincts but it will not be useful. On the other hand, if we can compare the statistics in terms of frequency and intensity to a missing driving force (like human action), as we are trying to do with attribution research, we can begin mitigation efforts and work to lessen the rate of such events.

This conclusion agrees with the Skeptical Science conclusion: “attribution is not a determination of initial conditions.”

Micha Tomkiewicz, Ph.D., is a professor of physics in the Department of Physics, Brooklyn College, the City University of New York. He is also a professor of physics and chemistry in the School for Graduate Studies of the City University of New York. In addition, he is the founding-director of the Environmental Studies Program at Brooklyn College as well as director of the Electrochemistry Institute at that same institution.
View all posts by climatechangefork →
This entry was posted in Anthropocene, Anthropogenic, Climate Change, Extreme Weather, Sustainability. Bookmark the permalink.

2 Responses to Attribution Vs. Chaos