Guest Blog: The Correlation and Effect of Wildfires and Climate Change

Posted on December 27, 2022 by climatechangefork

Hello, this week’s guest blog is from Mohdhar Yafai, Ariel Rukhlis, and Safiyah Mumin. We are all physics majors at Brooklyn College. As a previous blog (October 25, 2022), describes, wildfires are often large and rapidly spreading fires affecting forests, shrub areas, and/or grasslands. They occur in many areas of the world, especially those with extensive forests and grasslands. While most wildfires are started by lightning, a substantial number are started by humans, especially near populated areas. Our blog talks about the relationship between wildfires and climate change. We are using California as an example.

Wildfire activity in California and the western U.S. has greatly increased in recent years. California, like much of the West, gets most of its moisture in the fall and winter. Its vegetation then spends much of the summer slowly drying out due to a lack of rainfall and warmer temperatures. That vegetation then serves as kindling for fires. Population may also have an effect on wildfires–people are increasingly moving into areas near forests, insinuating and hinting at a potential increase in wildfires due to humans.

As such, one aspect we looked into was the potential effect of population on wildfires. Our claims upon this were that the larger the population, the more the chances of initiation of fires increase. This corresponds with the fact that people have begun to move closer to forests. We looked into the population in California and noted the general increase in population over time. Considering the fact that there is an increase in wildfires as well, this suggests a positive correlation between California’s population and the increase in wildfires. The results of our findings, however, suggest that population is not specifically the reason for initiation, but it definitely increases the damages due to wildfires. A quick look within Zillow, a site that shows properties for sale, shows properties closer to the waterfront range within the millions, between $700k to as great as $7M. However, when looking into properties for sale near forests, the price range tends to be lower than $700k, even as low as $70k. When comparing the figure of population density to the properties for sale, there is a great density in Los Angeles, which is not within a forest region but closer to the waterfront, but there is also a great density within Sacramento, a more rural area with more trees in comparison. These rural areas are where fires can begin due to human causes, from overhead wire cables to public picnics to arson to cigarettes. 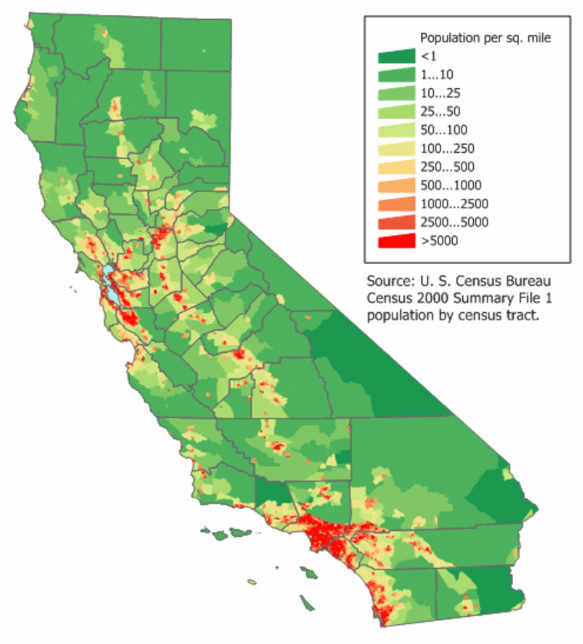 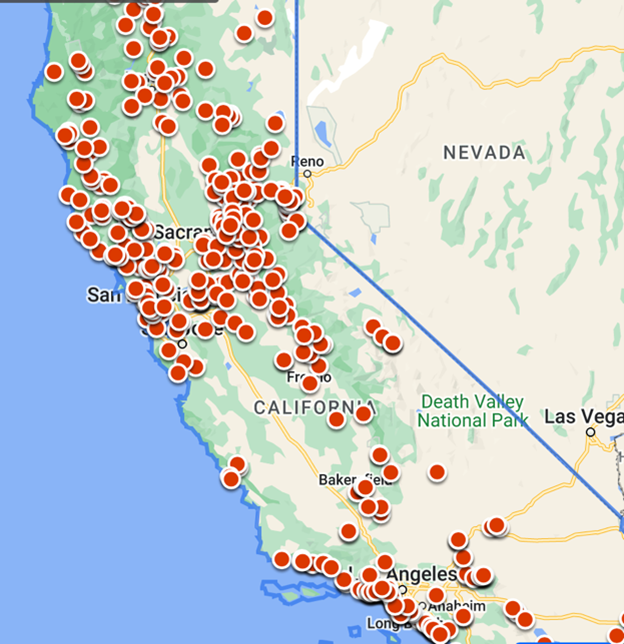 What is the principal cause for wildfires in California?

To determine the principal cause of wildfires in California we decided to compare California to two geographic locations that also contain forests. We decided to reference a location with a higher temperature. The mean annual temperature in California is approximately 15.3 degrees Celsius. On the other hand, the average annual temperature in Guyana is 31 degrees Celsius. Guyana is also home to one of the largest forests in the world, which provides plenty of wildfire fuel. It also has a steady increase in population, just like California. 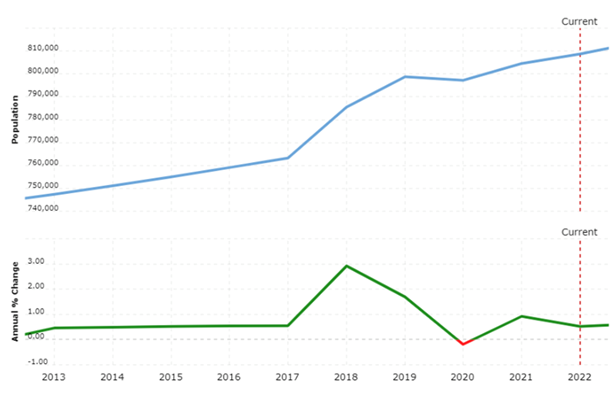 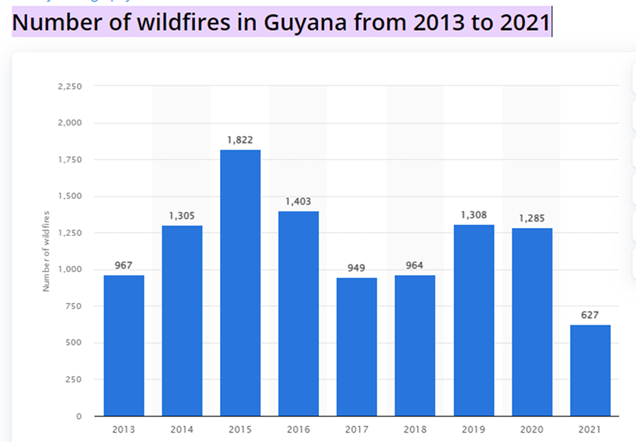 Based on the figure above, however, the number of wildfires in Guyana stays relatively constant and has not been increasing steadily as in the case of California. This seemingly eliminates population growth and temperature as the principal causes of wildfires.

Our second location of reference was Siberia, with a similar ecology but a lower population and a much lower temperature. The population of Siberia is approximately 36 million and declining. The ecosystem of California consists of many different forest types, among them coniferous forests. Siberia also has many coniferous forests. Depending on the part of Siberia, temperatures can range from -10° to -45°C or 0° to 20°F. Siberia also has some of the largest wildfires in the world. Why? Historic drought. Climate change causes arid or dry conditions, which seem to be the defining characteristics for wildfires rather than temperature and population growth.

The effect of Rainfall on Wildfires in California

Wetting rain is described as “a widespread rain that over an extended period of time significantly reduces fire danger. One-tenth of an inch may be sufficient to reduce fire danger in grass fuel models. One half inch may be necessary for timber fuels under closed canopies” (National Wildfire Coordinating Group). As we experience fewer “wetting rain” days, we can see a sharp increase in the area burned by wildfires. Why is that? Rain plays an important factor in preventing small fires from growing into larger fires, and more importantly preventing the arid conditions that encourage a wildfire to grow. We have therefore concluded that wildfires in California are closely associated with arid conditions associated with drought. Droughts and the dry conditions in California are part of a much more sophisticated problem involving climate change. 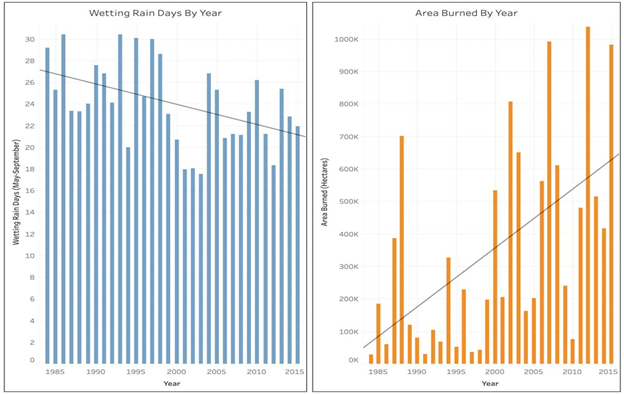 What are the impacts of wildfires on the climate? The cycle continues.

Let’s talk about wildfire emissions. Wildfires themselves are considered combustion reactions. Such reactions release CO2, greenhouse gasses, and particles such as black carbon. These emissions have a number of effects on both the environment and human population. This section will focus primarily on black carbon, a subcategory of aerosol particles. Black carbon (soot, <PM 2.5), one of the primary particles released during wildfire combustion, has the effect of absorbing light. Typical black carbon particles have an average diameter between 0.1 and 0.8 um. The phrase, <PM 2.5 refers to particles under the size of 2.5 um. Large-scale combustion refers to wildfires and all other non-listed industrial forms of combustion.

Other impacts include less predictable cloud formation and changes in the hydrological balance of an environment (precipitation patterns). Change in precipitation is particularly damaging for agricultural systems. Black carbon levels can be measured from both the ground and air. Black carbon has a number of adverse health effects on humans. Particles with a size of under 10 um are inhalable by the lungs, and therefore, can pose a threat to health. This particle has been linked to human mortality, particularly in deaths from heart disease, stroke, lung disease, and lung cancer, with an estimated 7 million premature deaths per year. The particle has also been linked to chronic respiratory diseases such as bronchitis and aggravated asthma (Climate and Clean Coalition, 2015).

Two studies, one by researchers in southern California and one from the School of Forestry and Environment Studies at Yale University, demonstrate that black carbon particles from wildfires may be of greater toxicity than other sources. The California researchers conducted a study on two groups of people. Both would be exposed to a 10 ug increase in black carbon particles relative to the environment average in California. One group would be exposed to PM 2.5 particles from wildfires, and others from non-related sources. For the wildfire group, a 1.3 to 10% increase in hospitalizations was found relative to the natural environment average. For the other group, a 0.67 to 1.3% increase in hospitalizations was found. There is a large discrepancy in the findings. The group sizes and other sources of black carbon were undisclosed. In our personal opinions, more such studies must be conducted to ensure accurate and consistent results to prove the claim of higher PM 2.5 toxicity from wildfire sources, relative to other sources. Figure 6 below graphically represents the findings of the California researchers’ study. 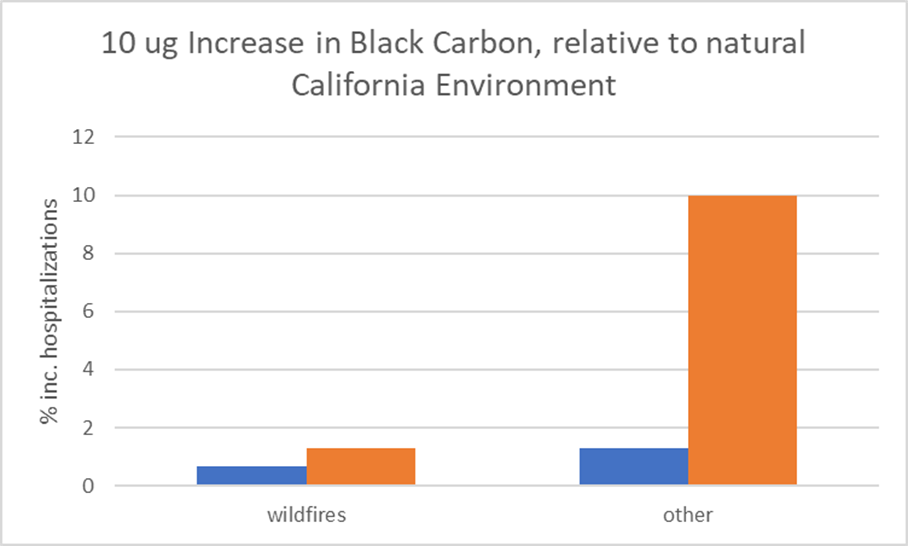 Figure 6: percent hospitalization increase due to PM <2.5 (black carbon) dose increase from wildfires vs. other sources

In conclusion, we can see population does not have a great effect on number of wildfires, but we can also conclude it plays a role in increasing the damages. We also compared this to two other regional locations with some similarities to California, such as Guyana with many forests but not seeing such an increase in wildfires yet also having a trend in increasing population, and Siberia with a lower population but also lower temperatures. Through this part of the study, we determined that climate change-caused arid or dry conditions seemed to be a defining characteristic for wildfires, and not temperature or population growth, eliminating both as causes for wildfires.

Micha Tomkiewicz, Ph.D., is a professor of physics in the Department of Physics, Brooklyn College, the City University of New York. He is also a professor of physics and chemistry in the School for Graduate Studies of the City University of New York. In addition, he is the founding-director of the Environmental Studies Program at Brooklyn College as well as director of the Electrochemistry Institute at that same institution.
View all posts by climatechangefork →
This entry was posted in Anthropogenic, Climate Change, Guest Blog and tagged aerosol, black carbon, California, cause, Climate Change, CO2, CO2 emissions, correlation, damages, Drought, Emissions, Extreme Weather, fire, forest, Guest Blog, Guyana, Health, hospitalization, human activity, human contribution, Population, Population Density, Population Growth, Precipitation, rain, rainfall, realty, respiratory disease, Siberia, waterfront, wildfire. Bookmark the permalink.

1 Response to Guest Blog: The Correlation and Effect of Wildfires and Climate Change