Posted on January 3, 2023 by climatechangefork

Happy New Year everyone! This week, guest blogger Muhammad Siddiqui is taking over the Climate Change Fork blog. Under the guidance of Prof. Dr. Micha Tomkiewicz, Ph.D., I’m a graduate student at Brooklyn College, CUNY, class of 2022. This blog addresses three more developing countries (India, Pakistan, and Bangladesh), as promised in an earlier blog (Nov 20, 2022), and attempts to answer what the loss and damage fund might mean to them.

Loss and damage funds are getting a lot of attention from the international community lately, due to their contribution to mitigating climate change’s effects on poor countries.

The establishment of the climate reparations fund was the culmination of the United Nations Climate Change Conference (COP 27) and decades of pressure from climate-vulnerable developing countries. The fund aims to provide financial support to the countries that are most vulnerable and affected by climate change. While it’s a historic milestone, success depends on how quickly this fund gets off the ground.

The Indian subcontinent is home to 1.8 billion people; it includes three populous countries: India, Pakistan, and Bangladesh. It was home to several ancient civilizations and is bounded by the Hindu Kush Himalayas (HKH). According to the German Global Climate Risk Index, India, Pakistan, and Bangladesh have been among the most vulnerable countries for the last several years. World Risk Index 2022 ranks these developing countries among the top 10. Examples of climate change-related extreme weather phenomena of different forms and magnitudes have been well observed during the past years, across the region. These include Bangladesh’s worst flood in 2021 and the 2022 heat wave in India and Pakistan. Pakistan is suffering from climate change adversities such as an extensive drought followed by a devastating flood due to higher glacial melt and historic rain in 2022. Robert Raikes (1910) and Wales (1989) hypothesized the extinction of the Indus Valley civilization (IVC) could be traced to extreme glacial and rain flooding caused by climatic changes. 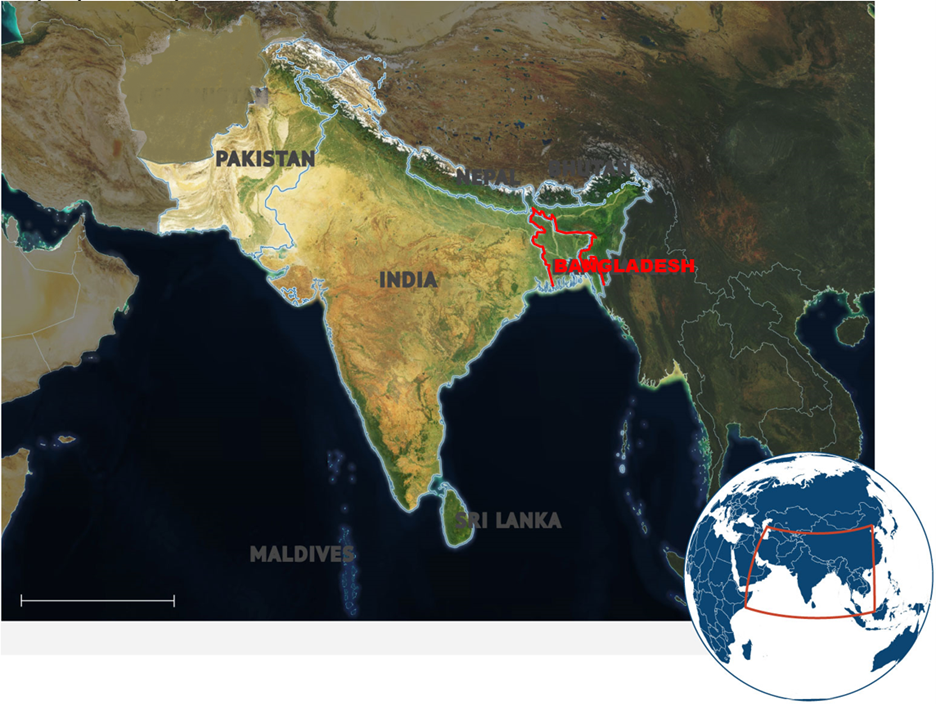 Figure 1  – map of the Indian subcontinent

India is on its way to being the biggest population in the world and is in the middle of an energy pivot. It is trying to mitigate climate change but is prioritizing energy security and need. Some new coal mining projects launched this past year, even though the quality of the local coal is lower than that of imported coal. GHG emission control orders are not being met by coal-fired power plants.

“I will not compromise on the availability of power,” India’s energy minister has declared in defense of fossil fuel use, which is heavily subsidized.

… “The way coal is priced, subsidies are leading to higher air pollution from power plant emissions,” said Sunil Dahiya, an analyst at the Center for Research on Energy and Clean Air.

… “We went into the transition, green, sustainability thing with a degree of passion that was almost religious fervor. But you’ve got to survive the present to be able to make a realistic transition,” Hardeep Singh Puri, India’s petroleum and natural gas minister, said in an interview.5

The Daily Star: Bangladesh has been awarded the Local Adaptation Champions Awards at the COP27 climate summit in Egypt along with three other countries.

“Our winners show that community-centric and locally led solutions to the climate crisis exist, but they require support and recognition to be scaled up and to achieve the most impact,” said Professor Patrick Verkooijen, chief executive Officer of the Global Center on Adaptation, explaining what the award signifies. 8

As part of the GCA awards, these countries are recognized for their efforts to adapt to the negative impacts of climate change; these have been divided into four categories: financial governance, inclusive leadership, capacity and knowledge, and innovation in local communities. Among the 170 countries to receive the award are Bangladesh, India, Nepal, and Kenya. Each winner will receive €15,000 in funds to further the work they are doing in the spirit of the locally-led adaptation principles. They will also have access to a global network of changemakers. 8

The environmental Kuznets curve, Gini coefficient, and global hunger indices are optimal for exploring data about economic inequality in the region.

Simon Kuznets proposed a hypothesis stating that as economic development occurs, there is a spike in environmental degradation. 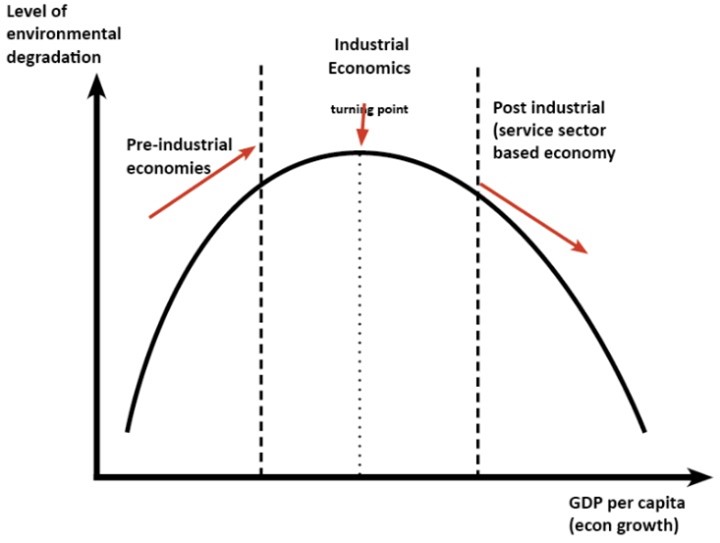 Figure 2 – Graphical representation of the relationship between a nation’s GDP per capita and its respective level of environmental degradation. 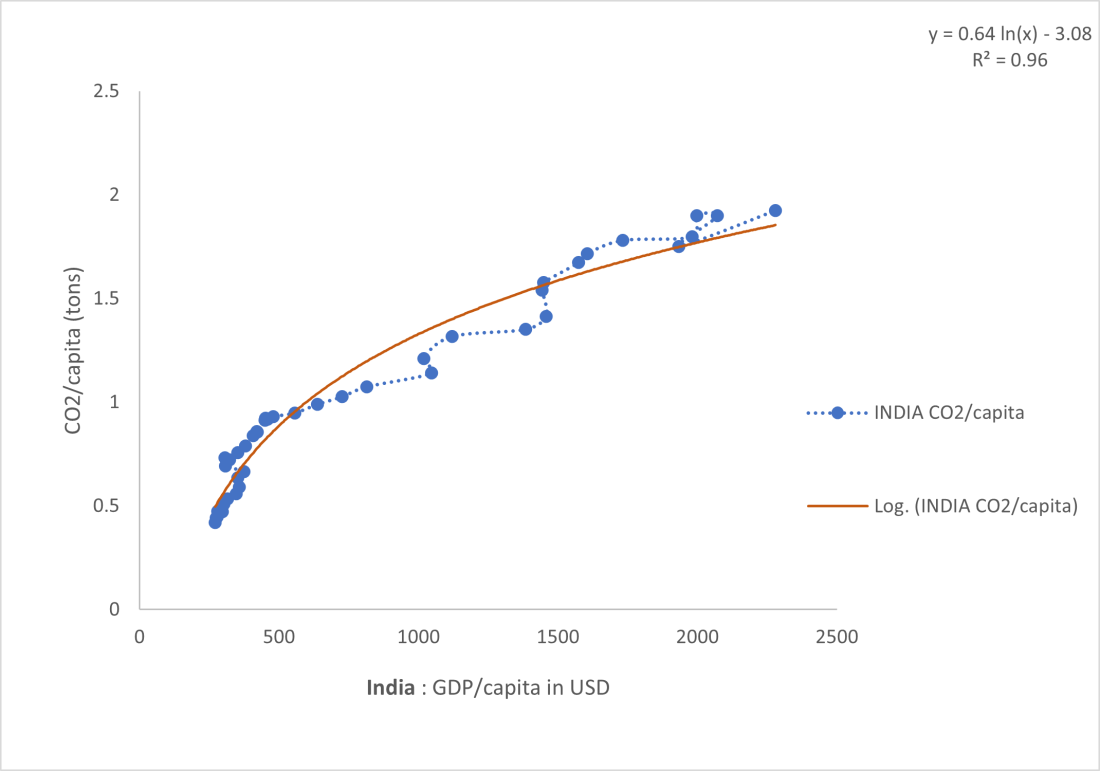 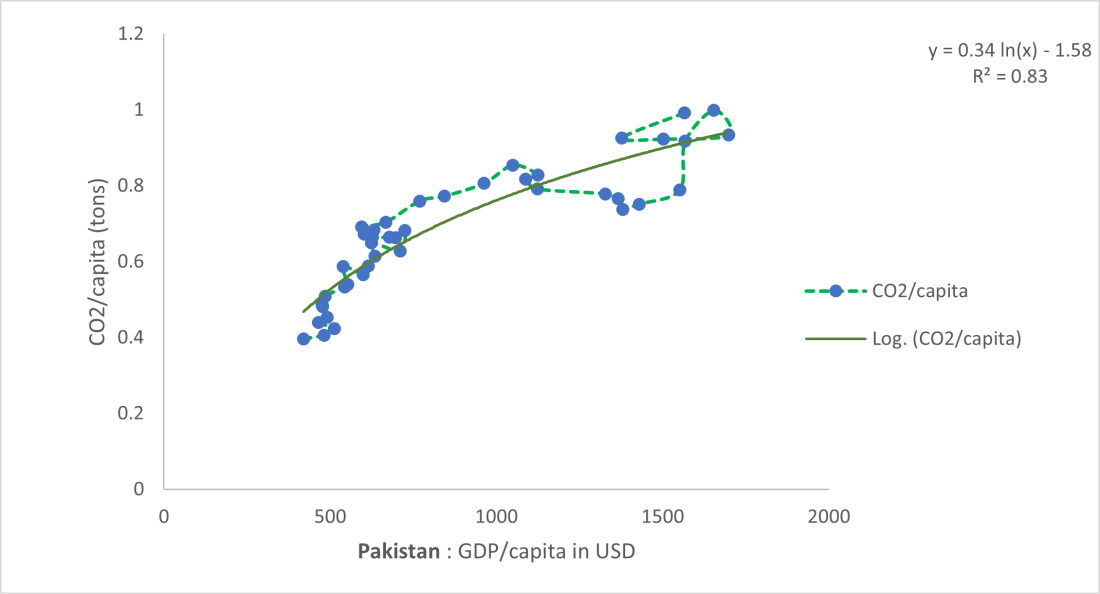 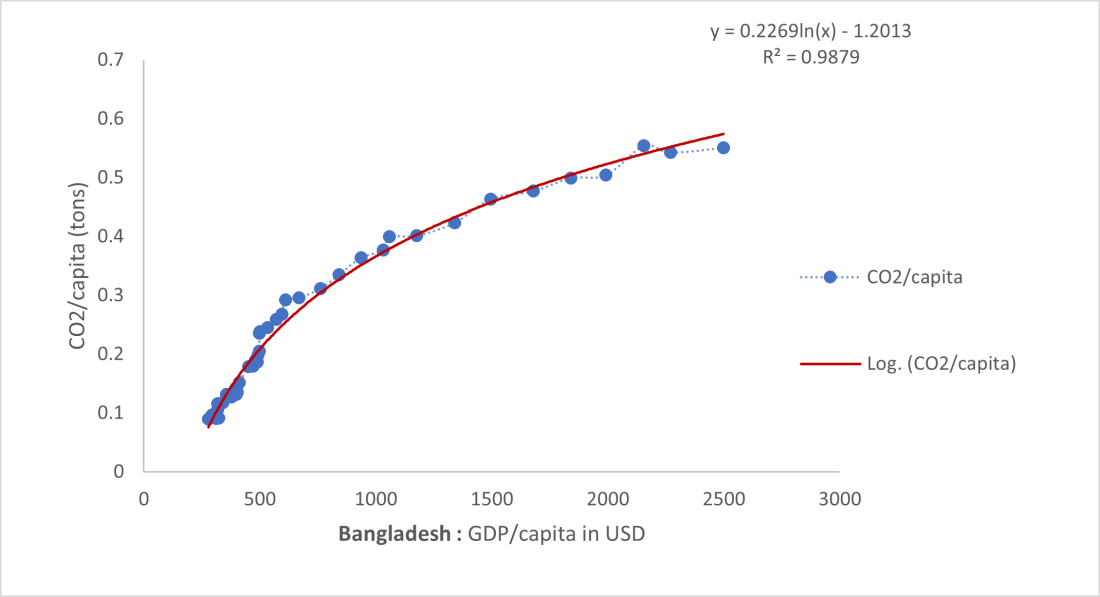 India, Pakistan, and Bangladesh are still in the pre-industrial phase of the Kuznets curve and have not met the Kuznets turning point yet. The modified curves for India, Pakistan, and Bangladesh clearly depict that their economies are still on the developing side. Bangladesh is showing better performance, in terms of steady growth, than India and Pakistan, which are both uneven in their growth. Carbon emissions and GDP growth have a strong relationship in India, Bangladesh, and Pakistan, as indicated by higher of 0.96, 0.99, and 0.83, respectively. This is an affirmation that CO2 would reach further heights to correlate with expected GDP growth. 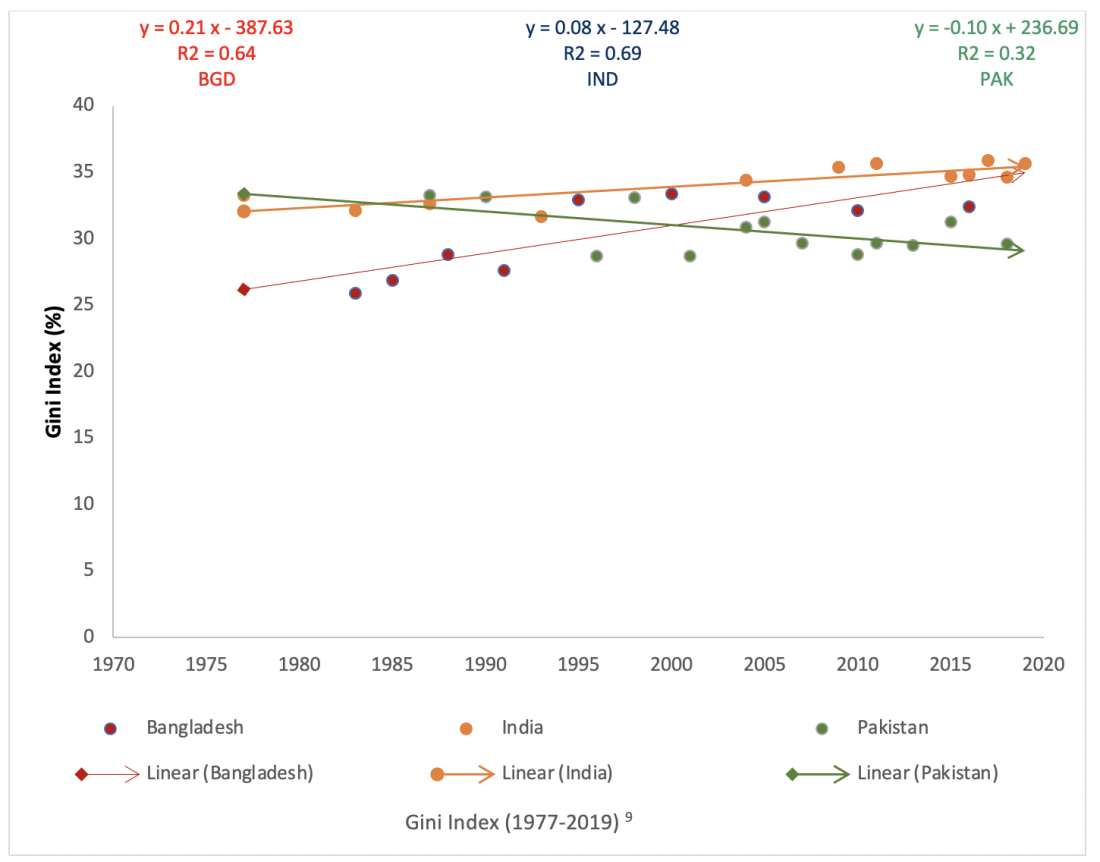 Figure 6 – Graph expressing the Gini indices and respective trends for India, Pakistan, and Bangladesh from 1977 – 2019

The Global Hunger Index (GHI) is a tool used to measure and track hunger at the global, regional, and national levels. It was developed by the International Food Policy Research Institute (IFPRI) and is published annually. The GHI is based on four indicators: the proportion of the population that is undernourished, the proportion of children under the age of five who are underweight, the mortality rate of children under the age of five, and the prevalence of wasting (low weight for height) in children under the age of five. The GHI scores countries on a 100-point scale, with 0 being the best score (no hunger) and 100 being the worst. Higher GHI scores indicate higher levels of hunger and undernutrition. The GHI is intended to be used as a tool for policymakers and others to help identify areas where action is needed to address hunger and malnutrition.

Table 2  – Global Hunger Indices for India, Pakistan, and Bangladesh and respective changes over the years

India, Pakistan, and Bangladesh are leaning towards decreasing poverty but there is a significant change expected due to current floods and their aftermath in Pakistan. Both Pakistan and India are at GHI’s serious level , while Bangladesh is at the moderate level. India (107th) and Pakistan (99th) are among the bottom three countries in South Asia, while Bangladesh went up the list (76th).20 An increase in the Global Hunger Index (GHI) indicates that the level of hunger in a particular country or region has increased, which can be caused by a variety of factors, including natural disasters, conflict, economic instability, and poor governance. It can also be caused by a lack of access to nutritious food or inadequate health care. The overall pattern for these three countries is fluctuating. If no solid measures are taken, the recent climate disasters may push both of India’s neighbors into the same range as India.

Pakistan has been using ”nature-based solutions” and ”ecosystem-based adaptation”6 in its national efforts to build climate resilience. The National Adaptation Plan process will be looking to build on these existing nature-based approaches, which include the Ten Billion Trees Tsunami Program, the Ecosystem Restoration Fund, and the Recharge Pakistan initiative.7

The government faces a difficult policy challenge in supporting relief and recovery while maintaining progress towards macroeconomic stabilization. The flood caused US$40 billion of damage and economic losses.11

UN Secretary General Antonio Guterres shared that “the people of Pakistan face the unrelenting impact of heavy rains and flooding – worst in decades”. UNSG added that “the Government of Pakistan’s response has been swift. It has released national funds, including in the form of immediate cash relief. But the scale of needs is rising like the flood waters. It requires the world’s collective and prioritized attention.” 12

“We are on the frontline and intend to keep loss and damage and adapting to climate catastrophes at the core of our arguments and negotiations. There will be no moving away from that,” Sherry Rehman said, who is leading the developing countries from COP27.13

Retired Lieutenant General Nadeem Ahmed, the former chief of Pakistan’s National Disaster Management Authority, discusses the government strategy of focusing more on infrastructure development. “The government needs to focus on people first,” he said. “We must invest foreign aid into people-centric projects and use our own resources for infrastructure development. People need to be rehabilitated today whereas major development projects will take time.” 14

The 2022 Pakistan Floods Response Plan (FRP) was jointly launched today by Government of Pakistan and the United Nations, simultaneously in Islamabad and Geneva. The FRP focuses on the needs of people, with life-saving response activities amounting to US$160.3 million focusing food security, assistance for agriculture and livestock, shelter and non-food items, nutrition programs, primary health services, protection, water and sanitation, women’s health, and education support, as well as shelter for displaced people. 15

Chief negotiator, Nabeel Munir, a career diplomat at COP27 said: “Loss and damage is not charity, it’s about climate justice.” Estimated needs for rehabilitation and reconstruction in a resilient way are at least USD 16.3 billion. 13

The United Nations Office for Coordination of Humanitarian Affairs (OCHA), report on Pakistan Flood Response Plan 2022 shows that it is facing a deficit of US$260.9m (55.2%) of requirements.

[The country’s Minister,] Ahsan Iqbal said “the government was also planning to elevate the 20 most backward districts of Pakistan through sustainable development. He said in Pakistan, each project needed to be at par with the environmental standards.” 16

India is trying to mitigate as “We were trying to ensure food security for the families first,” says Patil. “The women grow food on the farm to feed their families, and do it in organic, water-efficient, and low-cost ways.”

“Growing [cash] crops create a dependence on expensive chemical fertilizers, pesticides and market-bought hybrid seeds for the farmers, steeply increasing the cost of cultivation,” explains Patil. Receiving the Award in the capacity and knowledge category, the women-led initiative now supports farmers to transition from cash crops to food crops, and from chemical to bio inputs, supporting the conservation of soil and water while promoting more diversified and resilient livelihoods and businesses. 17

But India must balance its loss and damage fund claim and the increasing fossil fuel energy projects.

Bangladesh: from a Climate Victim to the Climate Leader

After an analysis of the results, the project is fostering discussions on climate-induced migration and future livelihood options before disasters hit. Another important project pillar is offering skills development opportunities for particularly vulnerable households. Panii Jibon combines these two goals: “Fifty-eight women and youth started entrepreneurial activities, dropping their decision on migration,” says Barua. “A number of them even created skills development opportunities for other local youth!” The strategic use of remittances for climate-resilient economic or livelihood activities has also been part of Panii Jibon’s activities. “Around 10,000 women learned how to better use their remittances and have invested their money to create income and jobs for others.” 18

Since India, Pakistan, and Bangladesh are already low-income inequality countries (Figure 6), further lowering inequality would increase carbon emissions. These countries need more climate change-based policies to address all aspects of the social fabric. Being developing nations, however, means that economic growth results in rises in carbon emissions—something which needs to be mitigated right now. Loss and damage funds are critical for the countries who are the worst victims of climate change and have the least resources for mitigation. Here, poverty is meeting climate change; it is vital to take brave adaptation steps and incorporate mutual stability, adaptation, and harmony. Countries continue to fight over resources (and even existence, sometimes) and their budgets do not necessarily prioritize the wellbeing of their citizens over causes such as defense. Loss & damage funds and international support  for survival can help avoid catastrophes like the collapse of the Indus Valley civilization.