Posted on November 26, 2013 by climatechangefork

I am an old guy. My wife is younger but also past her official retirement age. Like everybody else, we try to prepare for retirement times by investing our savings. She is also an academic so we share the responsibilities. She has a very “simple” investment policy: buy low and sell high. With this philosophy, you cannot lose. The problem with this philosophy is that you don’t know when a low is a low or when a high is a high, because a low can get much lower and a high can get much higher. To know when a low is a real low or a high is a real high you need to be able to predict the future. If you can predict the future you don’t need investment rules, you will always win. I also have my own very simple investment policy – diversify. We have combined our “philosophies,” and are doing fine. Diversification is needed because we cannot predict the future. Unfortunately, when I look around at issues that I truly care about, diversification of advocacies seems to be in short supply. Instead of welcoming multiple strategies for dealing with upcoming problems, there seems to be an attitude that only one approach can possibly work, and all others will lead to phenomenal failure.

One of the best examples of this is the dispute among advocates of mitigating climate change through a shift from fossil fuels. All of these groups agree that that this can best be attained by taxing fossil fuels, thus reducing their cost advantage as compared to more sustainable energy sources. The point of contention is the implementation of such a tax. The two options in question are a simple carbon tax, based on the carbon footprints that the fuels emit and a cap and trade policy based on trading emission rights while keeping a cap on the emissions overall. There have been bitter fights between advocates to decide which one is better. Among the leaders of this fight is one of the most admired advocates for changing public policy to enhance mitigation of man-made climate change: Dr. James Hansen (see my blog that honored him after his retirement announcement – April 9 blog). Hansen came out with a scorching OpEd in the New York Times titled “Cap and Fade” to criticize cap and trade and advocate carbon tax. Meanwhile, in light of the continuing disagreement over which to implement, we have ended up with neither.

Nuclear energy has been at the forefront of every dispute about energy use. It still is. The dispute got even more important after the Fukushima disaster on March 2011. One of the consequences of this disaster was that countries like Germany decided to completely remove nuclear energy as an acceptable source to feed the German electrical grid. It is obvious that nuclear energy has large issues as a major energy source for power generation, but so do all other power sources, including solar and wind. The concept of not choosing winners among competing technologies but, instead, keeping focus on a central goal and supporting any that are compatible with the goal to further research and development, while allowing the market decide as to their adaptability, seems a novel one.

Those addressing global water stress seem to suffer from the same issue. Spending five full years on an approval process (November 12 blog) and issuing a report by promoters of environmentally acceptable mitigation efforts to water stress titled “desalination with a grain of salt” that advocates to focus on allocation and recycling and keeping desalination as a last resort is not very useful (November 12 and 19 blogs). Neither is the use of small price differentials to justify using a particular technology for a facility for which the construction lasts 10 years.

Unfortunately, the use of environmental impact statements as a weapon to block a technology based on the hope that doing so will result in adopting a “favorable” technology often results in no action at all.

I will be specific, using an example that serves as the continuation of my recent series of blogs focused on attempts to alleviate the shortage in fresh water. This example is based on a recent paper in Agricultural Water Management 130, 1 – 13 (2013). The paper is a review article on the global state of wastewater, titled “Global, regional and country level need for data on wastewater generation, treatment and use” by Toshio Sato et al. The figure below summarizes the findings. 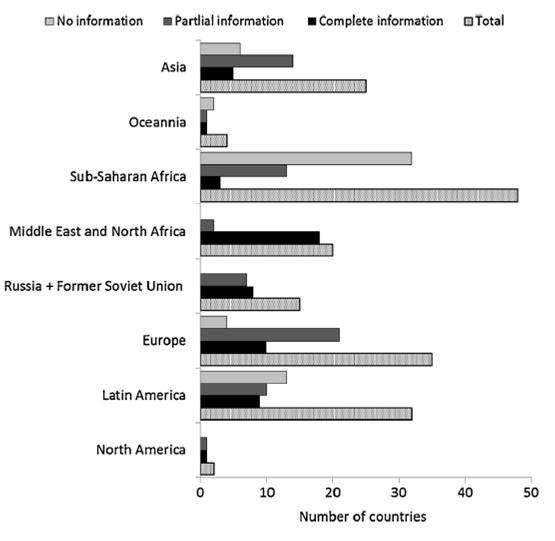 In this setting, “complete information” in the figure refers to availability of data on all aspects of wastewater use that include production, treatment and use, while “partial” refers to that of one or two aspects.

The tables in the paper include detailed information about the state of wastewater in most countries within the regions specified by the figure.

The table below provides the information about the US and Canada:

The data clearly show that water recycling has a long way to go, and to argue now that water recycling should be the clear preference in terms of fresh water supply over desalination is premature. Development work on both technologies is not only needed but is urgent. The same holds true for advancing the cause of finding broad uses for energy alternatives to fossil fuels and the required policies that will get us there. Parallel processing is a great concept that should apply to advocacy and not only computer programming.

Using environmental impact statements as a weapon to block a technology on the hope that it will result in adopting a more “favorable” technology often results in no action at all. The next blog will try to expand upon this problem with some examples.

Micha Tomkiewicz, Ph.D., is a professor of physics in the Department of Physics, Brooklyn College, the City University of New York. He is also a professor of physics and chemistry in the School for Graduate Studies of the City University of New York. In addition, he is the founding-director of the Environmental Studies Program at Brooklyn College as well as director of the Electrochemistry Institute at that same institution.
View all posts by climatechangefork →
This entry was posted in Climate Change and tagged Adaptability, Adaptation, Advocacy, Cap and Trade, Carbon, Carbon Footprint, Carbon Tax, Clean Energy, Climate Change, Desalination, Diversify, Economics, Emissions, Energy, Environment, Fossil Fuels, Fukushima, Investment, Jim Hansen, Nuclear, Nuclear Energy, Parallel Processing, Power Plants, Technology, Wastewater, Water, Water Cycle, Water Stress. Bookmark the permalink.