Posted on October 31, 2017 by climatechangefork

One of the most pressing problems jeopardizing our planet’s capacity to sustainably support (human and other) life is sea level rise. This comes as a direct consequence of the rise in global temperature: the accelerated melting of land-based ice combined with the expansion of ocean-based water.

The IPCC’s recent projections for business-as-usual scenarios include a sea level rise of 1 meter by the end of the century (April 25, 2017). But a paper in Nature made the case that the IPCC report significantly underestimated Antarctica’s contributions to the projected global sea level rise, stating that the estimate should be raised by a factor of 5.

Here is what NOAA has to say about it:

With continued ocean and atmospheric warming, sea levels will likely rise for many centuries at rates higher than that of the current century. In the United States, almost 40 percent of the population lives in relatively high-population-density coastal areas, where sea level plays a role in flooding, shoreline erosion, and hazards from storms. Globally, eight of the world’s 10 largest cities are near a coast, according to the U.N. Atlas of the Oceans.

Global sea level has been rising over the past century, and the rate has increased in recent decades. In 2014, global sea level was 2.6 inches above the 1993 average—the highest annual average in the satellite record (1993-present). Sea level continues to rise at a rate of about one-eighth of an inch per year.

The real estate database company Zillow produced a report estimating the cost of the damage:

The Netherlands doesn’t need to wait until the end of the century to experience the impact. A lot of that has to do with its geography:

The European part of the country can be split into two areas: the low and flat lands in the west and north, and the higher lands with minor hills in the east and south. The former, including the reclaimed polders and river deltas, make up about half of its surface area and are less than 1 metre (3.3 ft) above sea level, much of it actually below sea level. An extensive range of seawalls and coastal dunes protect the Netherlands from the sea, and levees and dikes along the rivers protect against river flooding. The rest of the country is mostly flat; only in the extreme south of the country does the land rise to any significant extent, in the foothills of the Ardennes mountains. This is where Vaalserberg is located, the highest point on the European part of the Netherlands at 322.7 metres (1,059 ft) above sea level. The highest point of the entire country is Mount Scenery (887 metres or 2,910 ft), which is located outside the European part of the Netherlands, on the island of Saba.

The country has done a lot over the last 60 years to protect itself from flooding:

As an old proverb says: God created the world but the Dutch created the Netherlands. Over 30% of the Netherlands lies below sea level. Floodings of sea and river water caused many victims as for example the 1953 flood disaster during which 1850 people were drowned.
The struggle against the water was both defensive, manifest by many dikes and dams, and offensive, as is shown by the many land reclamation works from as early as the 14th century.

The Delta Works (the closing of the sea inlets) are a masterpiece of engineering, but the Maeslant Kering (1997) is also an example of hydraulic ingenuity. Three great Dutch hydraulic works, among which a steam pumping station, are already on the Unesco World Heritage list.

The Dutch Delta is too precious to not take the necessary flood prevention measures Flooding of the large rivers which flow into the North-Sea .must be prevented It may even be necessary to re-inundate some polders at high tide and to restore old side gullies of the rivers to create overflow capacity.

At the end of 2011 a new style Delta Plan , the Delta Programme, was approved by the Dutch Senate .The object of the Delta programme is to protect our country against high water and keep our freshwater supply up to standard, now and in the future.

Figure 1 shows a map of the various projects. 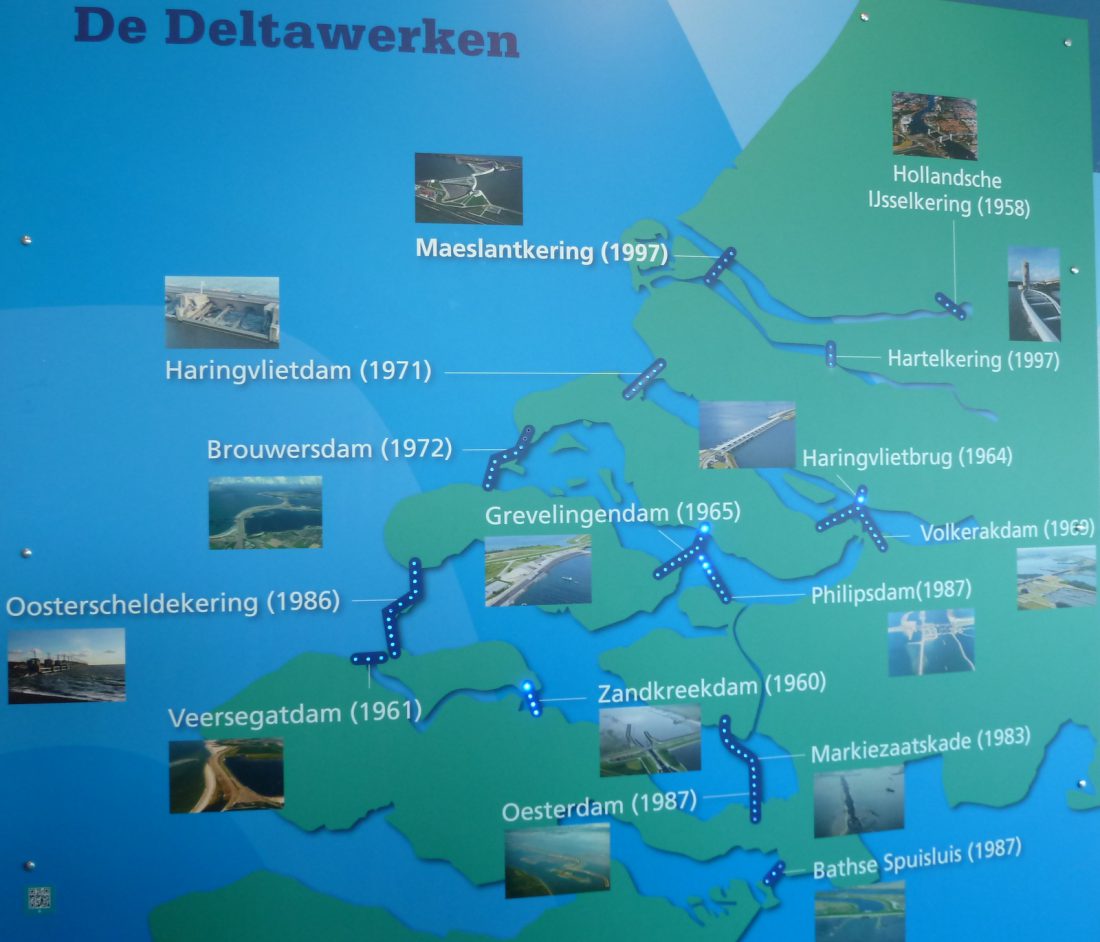 Figure 2 shows a timeline of the projects:

The same Wikipedia reference that provided the timeline discusses both the current status and the impact of climate change on future construction in the area:

The original plan was completed by the Europoortkering which required the construction of the Maeslantkering in the Nieuwe Waterweg between Maassluis and Hoek van Holland and the Hartelkering in the Hartel Canal near Spijkenisse. The works were declared finished after almost fifty years in 1997. In reality the works were finished on 24 August 2010 with the official opening of the last strengthened and raised retaining wall near the city of Harlingen, Netherlands.

Due to climate change and relative sea-level rise, the dikes will eventually have to be made higher and wider. This is a long term uphill battle against the sea. The needed level of flood protection and the resulting costs are a recurring subject of debate. Currently, reinforcement of the dike revetments along the Oosterschelde and Westerschelde is underway. The revetments have proven to be insufficient and need to be replaced. This work started in 1996 and should be finished in 2015. In that period the Ministry of Public Works and Water Management in cooperation with the waterboards will have reinforced over 400 km of dikes.[1]

In September 2008, the Delta commission presided by Dutch politician Cees Veerman advised in a report that the Netherlands would need a massive new building program to strengthen the country’s water defenses against the anticipated effects of global warming for the next 190 years. The plans included drawing up worst-case scenarios for evacuations and included more than €100 billion, or $144 billion, in new spending through the year 2100 for measures, such as broadening coastal dunes and strengthening sea and river dikes.

Attempts to adapt to such a reality are not constrained to the Netherland, nor are they limited to blocking the rising water. One new option is living in floating structures (some of which have so far experienced more success than others):

Are the Floating Houses of the Netherlands a Solution Against the Rising Seas? 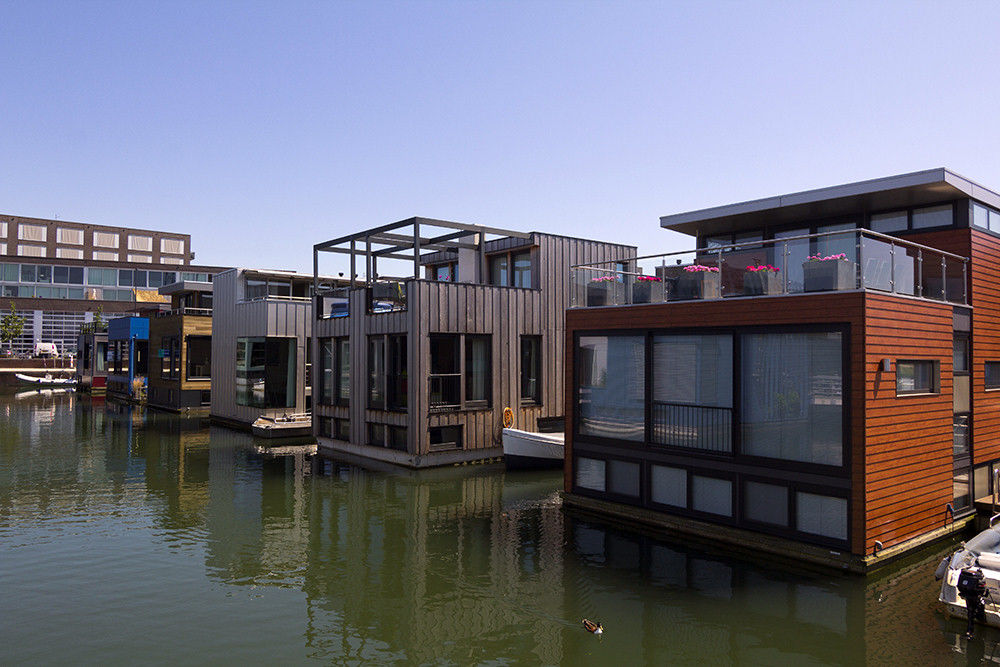 The technology used to build houses on water is not really new. Whatever can be built on land can also be built on water. The only difference between a house on land and a floating house is that the houses on water have concrete “tubs” on the bottom, which are submerged by half a story and act as counter-weight. To prevent them from floating out to sea, they are anchored to the lakebed by mooring poles.

As sea levels are rising globally, many cities around the world are under threat from water. Some areas are projected to disappear completely in the next few decades. Therefore, designing houses to float may, in some instances, be safer than building on land and risking frequent floods. “In a country that’s threatened by water, I’d rather be in a floating house; when the water comes, [it] moves up with the flood and floats,” Olthuis says. He believes that water shouldn’t be considered an obstacle, but rather a new ingredient in the recipe for the city.

Floating houses are not only safer and cheaper, but more sustainable as well. Because such a house could more readily be adapted to existing needs by changing function, or even moving to a whole new location where it can serve as something else, the durability of the building is much improved. Olthuis compares this to a second-hand car: “By having floating buildings, you’re no longer fixed to one location. You can move within the city, or you can move to another city, and let them be used and used again.”

When waters rise, these flood-proof houses rise right with them 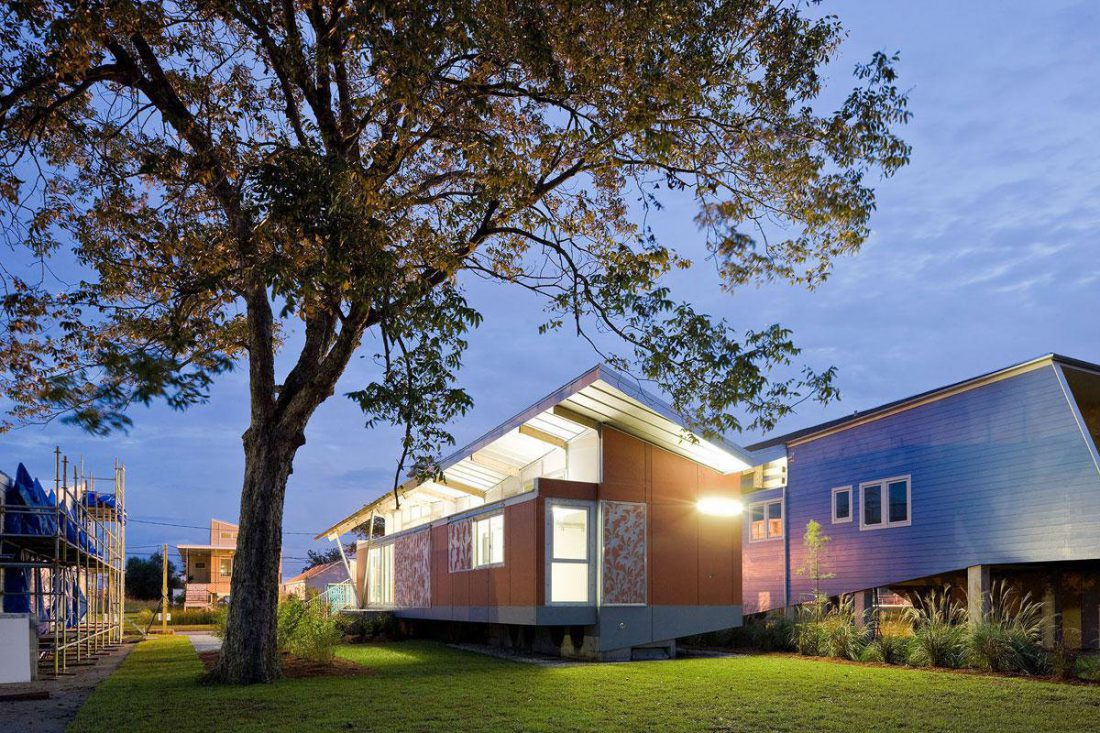 The Float House is an ambitious, affordable housing project based in New Orleans. The city still hasn’t fully recovered from Hurricane Katrina, and these pre-fabricated, flood-proof homes designed by Morphosis Architects attempt to ensure the region can withstand the next Katrina-scale event.

During a flood, the foundation of the house acts as a raft, rising with the water. The FLOAT House has the ability to rise up to 12 feet on guide posts, which are secured via two concrete pile caps that extend 45 feet into the earth for added stability.

The house is also designed to be as self-sufficient as it is flood-proof. Cisterns within the structure store rainwater collected from the roof, and the water is then filtered and stored until needed. Solar panels on the roof generate all of the house’s power. Electrical systems in the home store and convert this energy as needed.

Floating houses could be key to housing in post climate change world:

Is this liveable yacht concept the answer to housing amongst rising sea levels?

Innovative company Arkup thinks so, and will launch the 100 percent solar-powered, electric and self-sustaining floating homes at a Florida boat show next month.

Built to withstand hurricane strength winds, the luxury houseboat has four bedrooms, 4.5 bathrooms, collects and purifies rainwater and is self-sustaining enough to be considered off the grid. 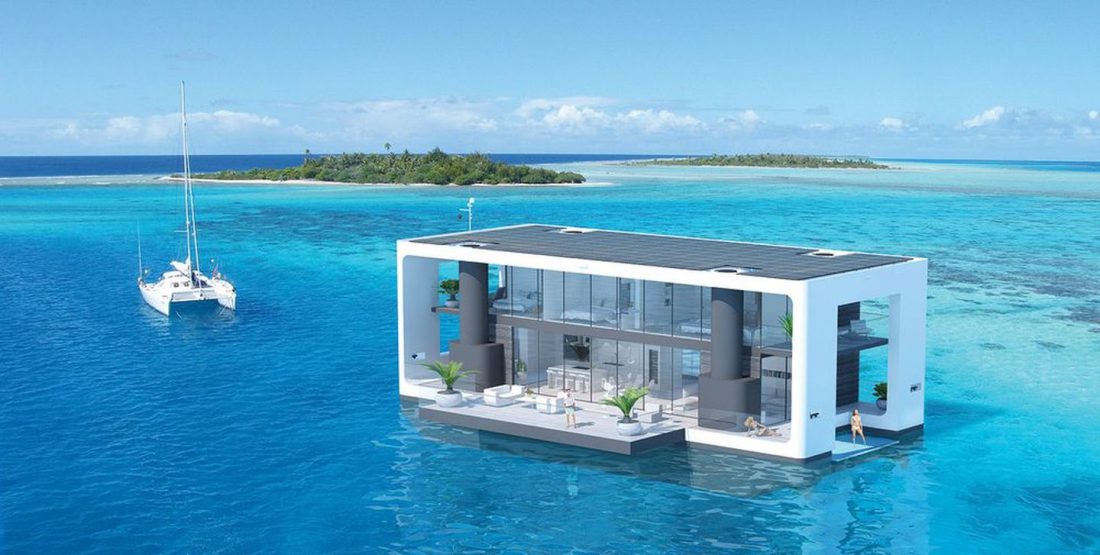 Next week I will focus on some of the energy alternatives that we will require to adapt to these situations.