Posted on December 4, 2018 by climatechangefork

The consequences of continuing the business as usual activities that result in climate change are not a mystery. We are in the middle of an avalanche of credible reports about the present state of the world and near future prognoses if we stay on our current path. The most recent official example (to my knowledge) is the World Meteorological Organization’s (WMO) 2018 provisional report, a relatively short piece that recaps where the world stands in terms of our carbon footprint. A number of different organizations publish such reports, each summarizing peer-reviewed literature. I would like to focus here on the National Climate Assessment (NCA) report posted on Black Friday. It is part of a report that congress has mandated must be published every four years. This is part two of the fourth report in the series; part 1 was published last year (see my August 15, 2017 blog). These are official, government-issued reports put forward by the current administration. This one continues to reflect the science – in spite of the fact that the president often claims that climate change is a Chinese hoax designed to weaken the US. This latest report spans about 1600 pages. I am quite sure that the president himself hasn’t read it. However, the more surprising element is that – according to the testimonies of people who took part in writing it – no one else in the administration interfered in the writing process or tried to modify its conclusions, all of which align well with every other recent report.

President Trump reiterated his denial in a tweet two days before the publication came out:

Brutal and Extended Cold Blast could shatter ALL RECORDS – Whatever happened to Global Warming?

He responded to questions about the report:

“I don’t believe it,” he told reporters outside the White House before boarding Air Force One for a flight to Mississippi.

The president also attempted to place the blame for global warming on China, Japan and “all these other countries.”

“Right now, we’re the cleanest we’ve ever been,” he claimed.

The White House also put out a statement about the issue:

Instead, these people said, administration officials hoped to minimize the impact by making the assessment public on the afternoon of Black Friday, the big shopping day after the Thanksgiving holiday, thinking that Americans might be unlikely to be paying attention.

The last comment mentions that the report outlines an extreme scenario. In terms of extreme scenarios, we usually use the end of the century as our marker (for perspective, Barron Trump is now 12). The most extreme outcome possible is Doomsday (August 21, 2017 blog). The report consistently analyzes two scenarios: RCP (Representative Concentration Pathway) 4.5 and RCP 8.5. These scenario families were developed by the IPCC, as I explained in a previous blog (October 28, 2014). Wikipedia defines them in this way:

The RCPs are consistent with a wide range of possible changes in future anthropogenic (i.e., human) greenhouse gas (GHG) emissions, and aim to represent their atmospheric concentrations.[3] RCP 2.6 assumes that global annual GHG emissions (measured in CO2-equivalents) peak between 2010–2020, with emissions declining substantially thereafter.[4] Emissions in RCP 4.5 peak around 2040, then decline.[4] In RCP 6, emissions peak around 2080, then decline.[4] In RCP 8.5, emissions continue to rise throughout the 21st century.[4]

In other words, RCP 8.5 is more or less a business as usual scenario; within the IPCC RCP scenarios, some do view it as the worst-case scenario. That’s not true, though. Under President Trump, the federal government is going backwards on environmental protections, meaning that, yes – it can get worse. Below are some of these measures, taken from the National Geographic’s more complete running list of changes that the president has initiated in his less than two years in office:

We don’t yet have the scenario that will develop if all of these changes materialize. The next NCA report is due in 2021 – after the next presidential election!

Lastly, there’s a small entry towards the end of the NCA report that examines the economic consequences projected to 2090 with the RCP8.5 scenario and how much we can “save” by shifting to the RCP4.5 scenario. 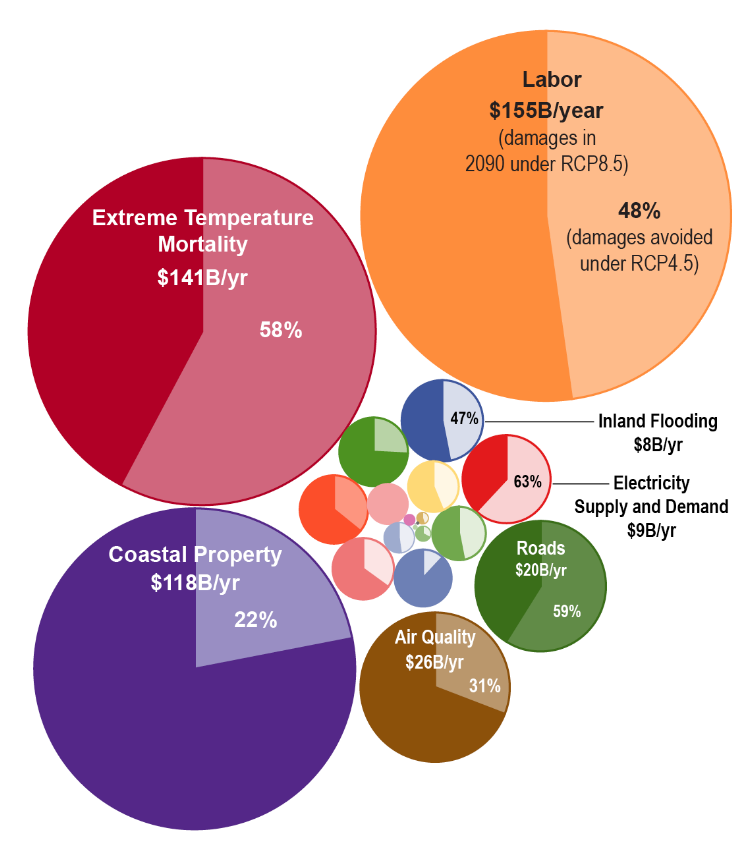 Figure 1 represents 93% of the damage portrayed in Table 1’s slightly more detailed table. Sizes in the figure are proportional to the estimated damage. The total estimated damage amounts to $511B (in 2015$) globally. The total GDP of the US in 2015 was $18T. If we assume a constant average growth rate of 2%, we can use the equation for doubling time, where r is the growth rate, to understand the exponential growth.

A population with a 2% annual growth would have a doubling time of 35 years.

Table 1 – Projected Damages and Potential for Risk Reduction by Sector 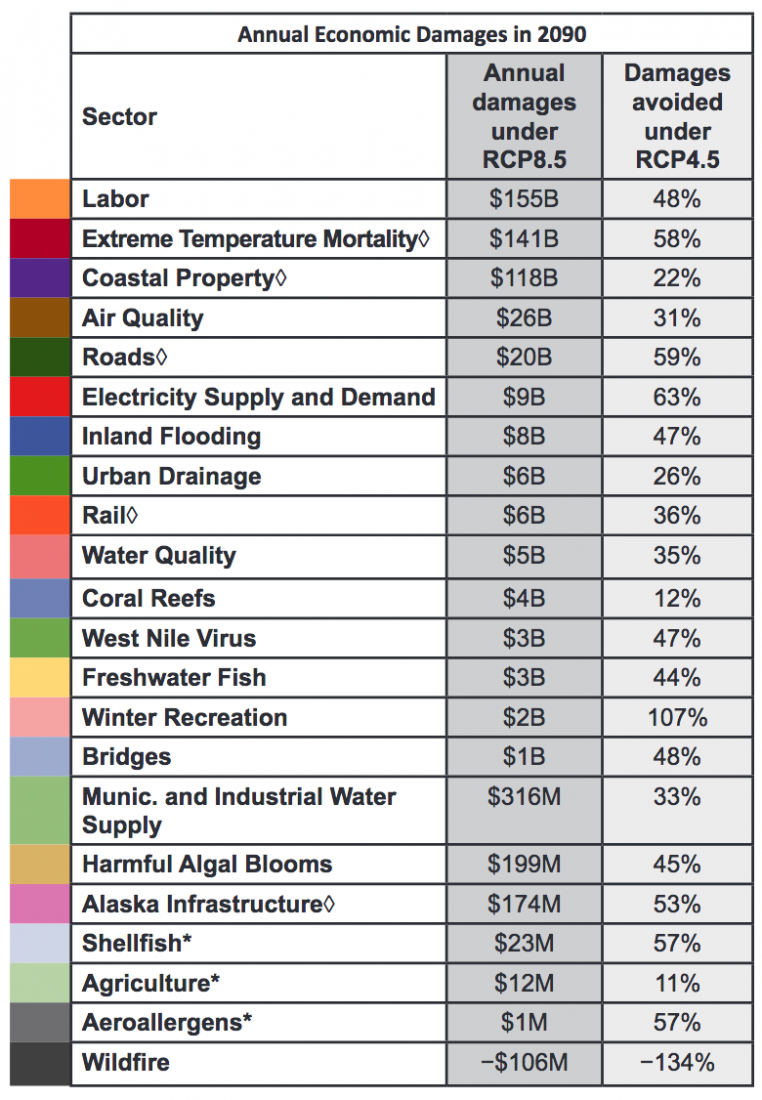 To put this into context, the world lost 153 billion hours of work to heat waves in 2017.

This was a balanced report, but not the same kind of “balance” that this administration prefers.

The report includes a chapter with a “Consensus Study Report” from the National Academies of Sciences, Engineering, and Medicine, reviewing its entirety in a span of 200 pages. Many of the critical comments written there resulted in real world improvements.

Since this was a report that was officially produced by the administration it would have been possible to include its kind of “balance.” They could have farmed it out to somewhere such as the Heartland Institute, which has a wealth of experience in presenting denials to the IPCC reports.

In the next blog I will try to go into the methodology of these economic estimates, rather than continue the discussion regarding whether the RCP8.5 estimates reflect worst-case scenarios or are on the conservative side.

Meanwhile, Happy Hanukkah to those who celebrate it!