Posted on July 23, 2019 by climatechangefork

We are entering new levels of extreme heat. June 2019 was the warmest June ever recorded. The Weather Channel summarized it:

I am writing this blog in the middle of a blistering heat wave in New York City—the humidity index here has exceeded 100oF for three consecutive days (see July 3, 2018 blog) —and 50,000 people lost their power. Not surprisingly, we are bombarded with publications about air conditioners (1.5 billion units are currently in use globally, a number expected to increase to 5.6 billion by mid-century) and severe water shortages that serve as canaries in a coal mine for the deadly impacts of climate change. Dubai has a permanent heat wave. Its hotels, cars, and shopping malls have air conditioning but 90% of the population there are workers with no such access. Even Europe is facing deadly heat waves and only about 10% of the people there are equipped with air conditioners. The Red Cross issued a 94-page report advising cities on how to protect their citizens.

A few days ago, the BBC published a list of eleven cities worldwide and their expected temperatures for the warmest months in 2050. That’s only one generation away. I compiled the BBC data and the cities’ most recent populations. I’m sure we’ll see a change in the latter number.

Table 1 – Expected temperature changes in 2050 vs. most recent populations in 11 major cities worldwide

At the moment, Ljubljana, Slovenia, which ties with Seattle for the smallest population on the list, is projected to have the most drastic change—a whopping 8oC (14.4oF!), while Istanbul, with the largest population, will “only” rise by 3.4oC (6.12oF).

Figure 3, from the same source, summarizes some of the consequences. 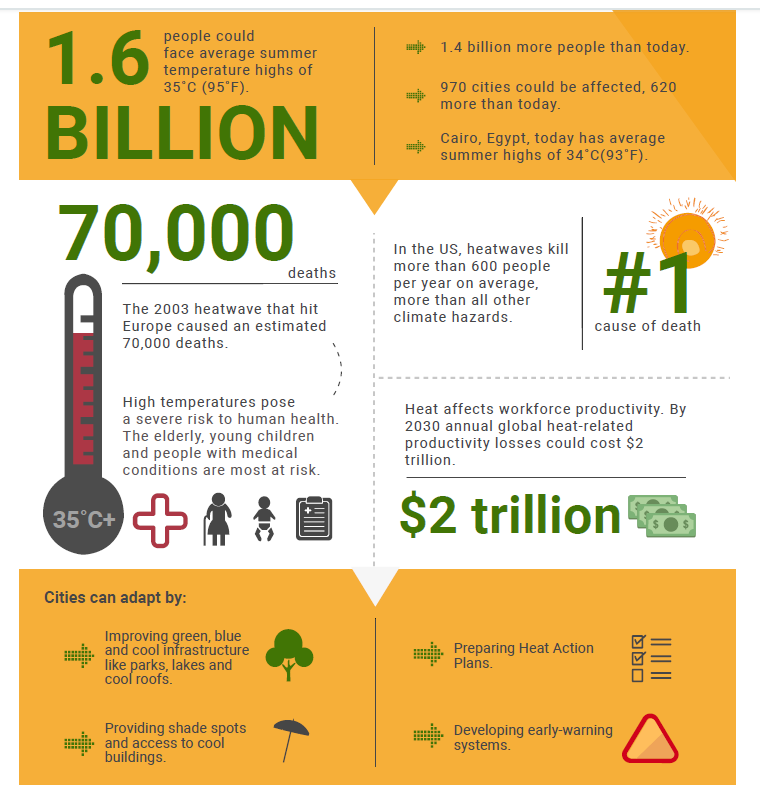 You don’t have to wait until 2050; you can envision the expected consequences now. The link here reports on mapping the trajectories of many cities within the US as their climates change over this time period.

If you figure out a city’s current temperature and precipitation, you can assume a business as usual scenario and calculate the city’s expected change by 2050. The cities that Vox examined in the article linked above will more closely resemble other ones that are farther south (sometimes hundreds of miles away). For example: staying put in St. Louis will be equivalent to moving to Tulsa; Minneapolis, to Des Moines; Albuquerque, to Elephant Butte, etc. In other words, to escape this plight, there will likely be a mass internal migration to the north, similar to what fish do each year. Think about the impact on real estate prices: what will the dynamics be during this transitional time and after? These changes will only continue.