Posted on December 24, 2019 by climatechangefork

Last week’s blog looked at Naomi Oreskes’ and Nicholas Stern’s October op-ed in The New York Times, “Climate Change Will Cost Us Even More Than We Think,” which dealt with a report about the unexamined economic risks of climate change. The authors posted a Q&A two weeks later, addressing questions from interested readers. This week I’m dealing directly with the report on which the op-ed was based. 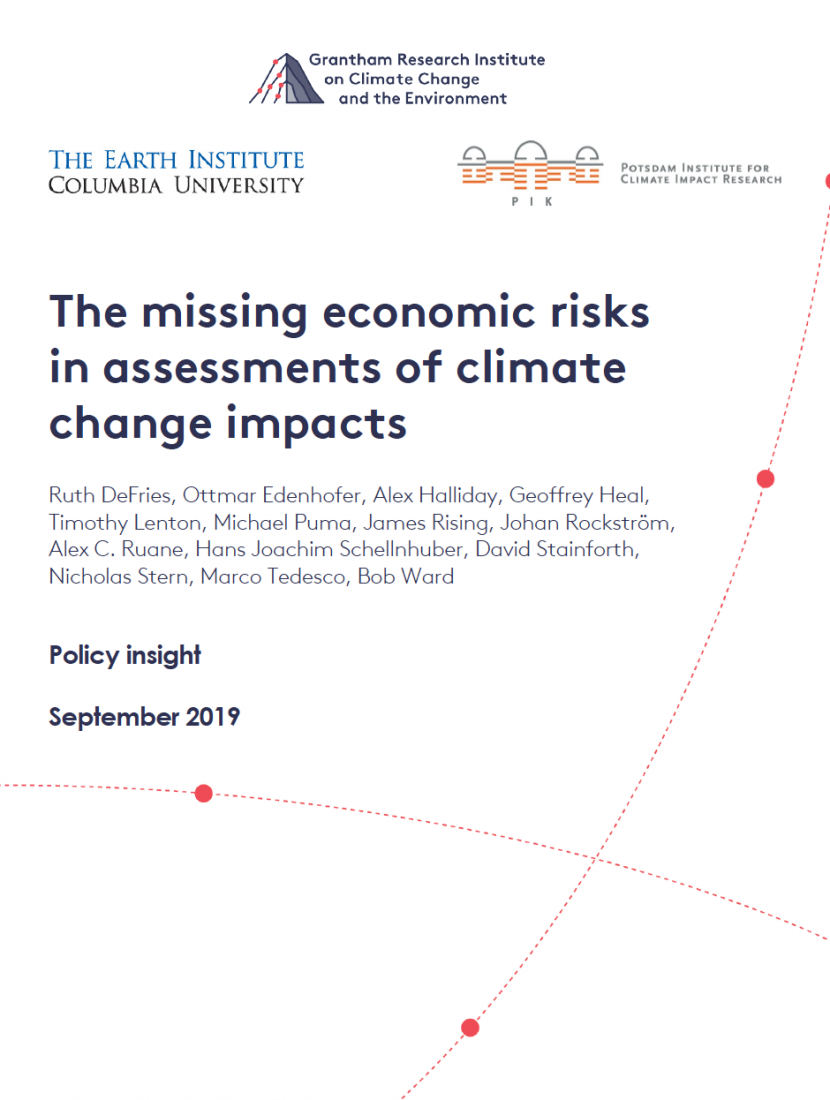 The report’s cover, above, bears the logos of three of the academic institutions that lead the world in climate change research. The report was published under the auspices of the London School of Economics which houses the Grantham Research Institute on Climate Change and the Environment, an institution where Nicholas Stern, one of the coauthors of both the report and the op-ed, serves as Director:

The Grantham Research Institute on Climate Change and the Environment was established by the London School of Economics and Political Science in 2008 to create a world-leading centre for policy-relevant research and training on climate change and the environment, bringing together international expertise on economics, finance, geography, the environment, international development and political economy.

The introduction of the report includes a short description of the three sponsoring institutions as well as mini biographies of all the coauthors. The 14 listed coauthors are divided almost equally between the physical sciences and economics. I say almost because most of them are highly interdisciplinary in their approaches; all are well known experts in their fields so we had better listen to what they have to say.

However, the report was not written for the same audience as the op-ed. It was aimed at policy makers rather than you and me. Climate reports show up often. I dedicate the second half of every semester that I teach climate change to the most up-to-date report—there’s a new one each time. Many of these reports appear in one way or another on this blog. Invariably, they contain an introduction summarizing the matter for policy makers, followed by a detailed analysis. You can find good examples of the IPCC reports and the National Climate Assessment reports on their respective websites. For those who have a question after reading the introduction and summary there are references on hand to the section with the original data and the rationale behind a finding.

The “Stern Review,” which I mentioned in last week’s blog and which was written by the same Nicholas Stern in 2005-2006, provides fantastic coverage of the economics of climate change as viewed at the time. The “Stern Review” has over 650 pages; the report that Oreskes and Stern reviewed has fewer than 15, not counting the references.

It is true that you can go to the original references provided in a report in search of support but almost no one ever does. When I read the report, my initial tendency was to look for cherry picking in arguments or rebuttals. With my background I quickly realized the validity of the reasoning. A less informed person (a policy maker, for instance?) likely wouldn’t spend the time or have the knowledge needed to do so.

The report has two main categories of arguments. The first category states that climate change is accelerating. Almost every climate change report worldwide agrees with that analysis; in certain impact areas such as sea level rise one can quantify the acceleration. The report provides some quantitative data about the accelerated impacts in the following areas:

The report offers the conclusion that if the impact of climate change is accelerating the resulting economic impact will do so as well.

The second category is more complicated. Economists have a proven practice of not including impacts that they cannot quantify in their economic models. There is an abundance of issues in climate change that are not linear and not fully understood. The easiest way of saving face for economists so far has been to ignore them, thus eliminating the possibility that they could make big errors from wrong estimates. This issue is so important that I am citing the full section of the report:

5.  Why the risks have been missed, omitted or unquantified.

The biggest risks from climate change are associated with consequences that are unprecedented in human history and cannot simply be extrapolated from the recent past. As such they are uncertain and difficult for scientists to quantify in physical terms. Furthermore, the resulting consequences for lives and livelihoods can be difficult to determine because they involve assumptions about the resilience of populations, their capacity for adaptation and their ability to move in a crowded world. The cascading risks that can result from these impacts can be difficult to predict precisely and to capture in simulations using current models. These uncertainties mean that the impacts are difficult to represent in terms of costs and benefits and are therefore often ignored or omitted from economic models. In essence, they are assigned a probability of zero even though it is understood that to do so is incorrect.

Some of the physical processes that are not well understood, in terms of both occurrence and impact, and therefore are not adequately included in assessments are:

Other processes that need to be better represented in models include:

Even when the economic consequences of these impacts can be represented in policy assessments, they may be downplayed if they are not due to occur imminently. Inappropriate discounting by economists can lead very significant future impacts – such as long-term sea level rise during the 22nd century – to be treated as if they are relatively trivial compared with current impacts.

In addition, economic assessments often present consequences in terms of the impact on gross domestic product only, a measure of economic output that is too narrow to be able to convey the true nature and scale of damage to lives and livelihoods.

Finally, some risks are likely to be missed simply because scientists have not yet detected their possibility. As we have entered a period of climate change that is unprecedented in human history, there may be additional impacts that have not yet emerged and that we are not yet anticipating.

Some advances are being made in improving economic assessments of climate change impacts, but much more progress is required if these assessments are to offer reliable guidance for political and business leaders about the biggest risks. Some of the risks are difficult to model satisfactorily, but more progress might be made. Other risks are currently impossible to assess numerically, which economists need to acknowledge with greater openness and clarity.

Clearly this is an enormous issue that needs to be tackled. I’ll be looking at some of the specific economic issues that climate change is impacting now as well as some quantifiable, non-linear aspects of climate change.

Meanwhile, happy holidays to all of you!