The End of the Beginning

Posted on December 29, 2020 by climatechangefork

Winston Churchill made this declaration in his speech after the British won the second battle of El Alamein against the Germans in 1942. One of my English friends emailed me the following cartoon; it seems like a good fit for the opening of my last blog of 2020 (even though the COVID-19 vaccines all go in the arm). 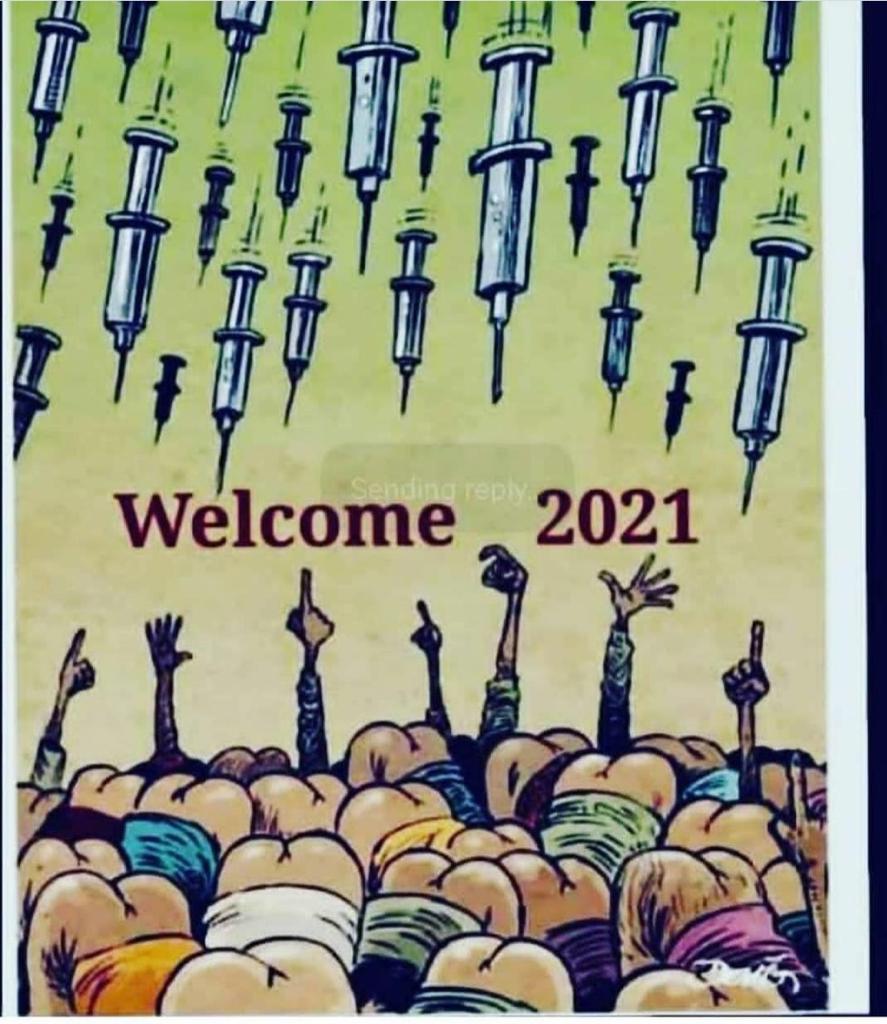 I just finished a semester teaching four online courses at various levels, I continue to write this blog, and as always, I work hard to be a decent human being. My wife and I are also participating in stage 3 of the AstraZeneca COVID-19 vaccine trial.

I try to find the time to read recent works on WWII. There’s a new collection of books that makes use of Russian archives from that period. I’m particularly interested in the writings by German historians. Close to the start of the pandemic, I started to read Volker Ullrich’s second book about Adolph Hitler that was recently translated to English: Hitler: Downfall: 1939-1945. Unconsciously, I find myself comparing our present situation to WWII.

I started this blog on April 22, 2012 with a short personal history of myself and my family, starting during WWII. This is not the first tigme I have drawn parallels to the present. I am not going to compare individual events. My focus is on turning points. The battle of EA took place more than 80 years ago. We now know how both it and WWII ended. When he made his famous speech, Churchill knew how the battle of El-Alamein had ended but could not have predicted the outcome of the battle of Stalingrad. We don’t fully know how (or if???) Trump’s presidency will end on fJanuary 20th.

Two turning points stand out in WWII. The Battle of El Amein took place from, October 23 – November 05, 1942, with Bernard Montgomery leading the British forces against Erwin Rommel’s German ones. In the battle of Stalingrad (Battle of Stalingrad – Wikipedia), August 1942 – February 1943, Gregory Zhukov’s Russian forces faced off against Friedrich Paulus’ German ones. The number of casualties (dead and wounded) in the Battle of EA is estimated at 14,000 British and 60,000 Germans. The casualties in the battle of Stalingrad are estimated at 800,000 Germans and 1.1 million Russians.

From the start of WWII, with the German invasion of Poland, the Germans scored a set of nonstop  victories. There was a very real threat that the Nazis would, in no time, be able to control the entire European continent. This belief was shattered with the German battlefield losses toward the end of 1942, which serve as the background of Churchill’s speech. On a more general level, Germany’s invasion (Operation Barbarossa) of the Soviet Union in June of 1941 and the addition of American forces to the Allies as of December 1941 made Germany’s (and the Axis powers’) loss of the war almost inevitable.

Almost three years passed between Churchill’s “End of the Beginning” speech and the end of the war. Most of the WWII deaths and murders, including those of the majority of my direct family, took place after the battle of El-Alamein. WWII in Europe ended on May 8, 1945 (Victory Europe Day). I was liberated on April 13, 1945 by the American army.

Back to the present pandemic. The virus that causes COVID-19 was first identified in Wuhan, China in December 2019. As of last week (December 24, 2020), there were close to 80 million coronavirus cases estimated globally, with roughly 1.7 million dead. The number of infections is probably much larger because most testing (throughout the world) has been done on people with symptoms.

The UK, Canada, and Bahrain’s temporary approval of the Pfizer-BioNTech COVID-19 vaccine as of December 10th marked what we hope will be the end of the beginning of our current struggle. The US, the EU, and other countries have followed suit in approving the Pfizer vaccine and some countries have since approved the Moderna vaccine.

Following these approvals, a massive vaccination effort has started to take shape. My wife and I are participating in the Oxford/AstraZeneca phase 3 testing. We do not know how long it will take for the world to return to normal—such an occurrence will require some sort of herd-immunity that it is now estimated will require more than 80% of the population to receive a vaccine—but we now have reason to hope it will be soon.

Our current pandemic can be compared on various levels to the Spanish Flu that took place at the tail-end of WWI (May 12, 2020 blog). Most of the people that lived through the Spanish Flu lived also through WWI, so comparisons of the miseries, including number of deaths, were abundant (40 million in WWI vs. 50 million from the Spanish Flu).

The number of people who lived through WWII, and are now living through the current pandemic, is fast shrinking. I am one of them, so, I have the “license” to compare. I have lived with the term, “survivor” in relation to the Holocaust for many years. I’ve never liked the term. It is too passive. I was a child during WWII and I had no way to take action. Now I have a choice. My wife and I volunteered to participate in the AstraZeneca phase 3 trial in part because it was a way to do something in the face of this crisis.

Over the last week of 2020, I saw two new movies that will be relevant to our 2021 discussion of anthropogenic (human-made) global disasters. One was Wonder Woman 1984, which depicts the disastrous consequences of everyone in the world being granted a wish. It ends with a simple, if predictable solution for how to save our planet and society. The second movie was George Clooney’s “The Midnight Sky,” which, while it focuses on our planet’s destruction from some unknown cause, does not offer a solution.

Have a safe and happy New Year.

Micha Tomkiewicz, Ph.D., is a professor of physics in the Department of Physics, Brooklyn College, the City University of New York. He is also a professor of physics and chemistry in the School for Graduate Studies of the City University of New York. In addition, he is the founding-director of the Environmental Studies Program at Brooklyn College as well as director of the Electrochemistry Institute at that same institution.
View all posts by climatechangefork →
This entry was posted in Holocaust and tagged 2021, Churchill, coronavirus, covid, COVID 19, death, El-Alamein, Future, History, Hitler, Holocaust, hope, immunity, New Year, pandemic, spanish flu, Stalingrad, survivor, symptom, trial, vaccine, Volker Ullrich, Wonder Woman, WWI, WWII. Bookmark the permalink.

1 Response to The End of the Beginning