Posted on October 26, 2021 by climatechangefork

My last 5 blogs have looked at global energy companies’ apparent green shift, questioning their objectives: where are they shifting? Last week, I promised that I’d address both this and the timing needed for the transition. To address the first part, I must tackle the larger issue: globally, where do we ultimately need to go to shift our energy use so that we have enough energy at a price that all of us can afford? We need to power a flourishing global economy without destroying the planet in the process.

Obviously, I am not the only one that is trying to address the issue. The COP26 UN meeting in Glasgow, Scotland is quickly approaching (scheduled to last two weeks from its start on October 31st); I am focusing here on two of the biggest subjects leading up to it: energy generation from the fusion of hydrogen nuclei and the hydrogen economy. I’ve addressed both topics extensively throughout Climate Change Fork’s more than 500 posts. You can search for either in the search box to find examples. Both concepts, as their names imply, are based on hydrogen and its isotopes. The two are tightly connected.

Earlier this month, I looked at the transition in the automotive industry (October 12, 2021). I included the example of what is happening at Daimler, the world’s largest maker of heavy trucks. The batteries that have been successful in powering vehicles for shorter distances are not practical for long-haul trucks. Daimler and its competitors are instead looking into internal combustion engines with green hydrogen fuel (produced from water with non-carbon energy sources).

Obviously, not everybody is giving up on the electrical grid. Not surprisingly, the solution that is attracting more and more attention (and money) is nuclear fusion (emphasis is mine):

ABINGDON, England — Harnessing fusion energy into something commercially viable — and maybe, ultimately, a clean source of power that replaces fossil fuels for centuries to come — has long been considered by some as the ultimate moonshot.

But investor interest in fusion energy continues to slowly rise, and the number of start-ups in the field is multiplying, with an estimated 1,100 people in several countries making their living at these firms. An industry is taking shape, with a growing network of companies that supply highly specialized equipment, like the components of the powerful magnets that fusion devices require.

The British government even recently saw the need to issue regulations for fusion energy — a kind of milestone for a burgeoning industry.

No one knows when fusion energy will become commercially viable, but driving the private investments is a rising alarm about global warming.

“Nobody has a better plan to deal with the climate crisis,” said David Kingham, one of the three co-founders of Tokamak Energy, a company that has raised about $200 million, mostly from private sources.

This is not the only publication to describe this trend.

If all our energy were to come from fusing hydrogen, as present trends indicate might be possible, our electricity use would technically make Earth a star, making us a binary star with the sun. Stars are defined in terms of their hydrogen fusion energy-producing cores. To fuse hydrogen in its core, gravity needs to produce a core with a temperature of millions of degrees C. We need a large mass to accomplish it. The lowest surface temperature of stars is 3000oK (2730oC) (oK, or Kelvin, is equal to the Celsius scale with the addition of 273). Understandably, that means there is no life possible (that we know of) on the surface of any star.

Earlier this year, I discussed the prospect of producing electricity using hydrogen fusion (June 8, 2021). We have plenty of hydrogen on this planet in the form of water; its molecular structure consists of two hydrogen atoms connected to an oxygen atom. However, water is the stable, low-energy product of the combustion of hydrogen. We would need to use energy to separate its hydrogen atoms before we could use those for energy production.

The nature of the water cycle on Earth is such that, even though it is constantly changing form, it’s a closed system and the total value of the planet’s water is constant (see the September 3, 2013, blog). Energy use, on the other hand, is not cyclical. The second law of thermodynamics means that the output is always less than the input. We get high-quality energy (high temperature), mostly from the sun, use it for whatever the planet needs, and emit it back into space in the form of lower temperature heat.

However, what makes this planet habitable is the large availability of accessible liquid water. Every form of life that we know needs liquid water to survive. Humans can only directly use fresh water, which consists of around 0.5% of all naturally available water.

Figure 1 shows the schematics of the “water-energy nexus,” the connection between our energy use and our water availability. If you Google the term, you’ll run into a slew of diverse activities emerging around this connection. 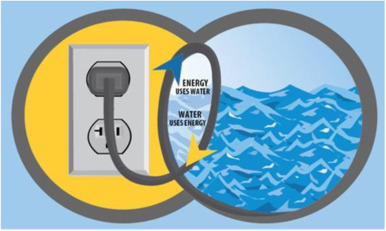 Water is a top adaptation priority. In 2018, 2.3 billion people were living in countries under water stress1,2 and 3.6 billion people faced inadequate access to water at least one month per year. By 2050, the latter is expected to be more than five billion.3 Assuming a constant population, an additional 8% of the world’s population in the 2000s will be exposed to new or aggravated water scarcity4 associated with a 2°C of global warming.5 Concurrent population growth would further increase this number. Human- and naturally-induced stressors are increasingly adding pressure on water resources, a key prerequisite for human development. In the past 20 years, terrestrial water storage – the summation of all water on the land surface and in the subsurface, including soil moisture, snow and ice – has been lost at a rate of 1cm per year. The situation is worsening by the fact that only 0.5% of water on Earth is useable and available freshwater. Integrated Water Resources Management (IWRM) is vital to achieving long-term social, economic and environmental well-being. But, although most countries have advanced their level of IWRM implementation, 107 countries remain off track to hit the goal of sustainably managing their water resources by 2030,6 as set out in the UN Sustainable Development Goal No. 6 (SDG 6). In 2020, 3.6 billion people lacked safely managed sanitation services, and 2.3 billion lacked basic hygiene services. The current rates of progress need to quadruple in order to reach the global target of universal access by 2030.7,8 Meanwhile, water-related hazards have increased in frequency for the past 20 years. Since 2000, flood-related disasters have increased by 134%, compared with the two previous decades.9 Most of the flood-related deaths and economic losses were recorded in Asia, where end-to-end warning systems for riverine floods require strengthening in many countries. The number and duration of droughts also increased by 29%. Most drought-related deaths occurred in Africa, indicating a need to continue strengthening end-to-end warning systems for drought.

The WMS report mostly focuses on climate change’s destructive power: worsening water-related hazards and diminishing fresh water availability. Meanwhile, when we look at water’s impact on energy production, we often focus on hydroelectric power generation, which now makes up 65% of global renewable energy production. However, it is important to remember that water is also directly involved in the cooling of almost all power plants, regardless of their energy sources.

This blog is old enough to be able to track updates in the hydrogen economy. My last blog that dealt with the issue (April 2, 2019) focused on Japan. Today, almost every country or region is experimenting with the concept. I will try to expand the term of hydrogen economy to include energy production from hydrogen fusion in next week’s blog. In this universal hydrogen economy, not all energy production needs to be human-made on Earth; a significant fraction of our energy comes from the sun (including solar and wind)—after all, we are part of the solar system.

Micha Tomkiewicz, Ph.D., is a professor of physics in the Department of Physics, Brooklyn College, the City University of New York. He is also a professor of physics and chemistry in the School for Graduate Studies of the City University of New York. In addition, he is the founding-director of the Environmental Studies Program at Brooklyn College as well as director of the Electrochemistry Institute at that same institution.
View all posts by climatechangefork →
This entry was posted in Climate Change, Electric Cars, Electricity, Energy, Water and tagged Adaptation, Battery, Clean Energy, Climate Change, CO2, Daimler, Drought, Energy, energy production, Extreme Weather, fission, Flood, freshwater, fusion, green, hydrogen, hydrogen economy, Japan, Mitigation, Nuclear, nuclear fusion, Power, power plant, Solar, star, Transition, Water, Water Cycle, water energy nexus. Bookmark the permalink.