Posted on August 16, 2022 by climatechangefork

ESG (Environmental Social & Governance) is back at the forefront of discussion as an investment tool. Put ESG into this blog’s search box and you will get a few entries. The May 24, 2022 blog provides some details and connections to the IPAT identity, and both the January 8th and March 5, 2019 blogs provide some information about using the Bloomberg Terminals to be able to estimate the entries. The table below, from the site of an investment advisor with the associate reference, provides a summary of the topics that are included in the concept. 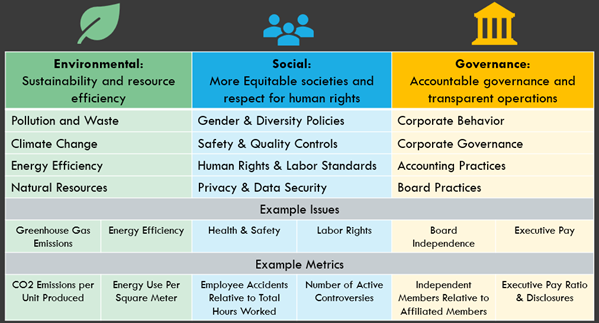 I will try to put the discussion here on a solid footing by quoting the corresponding Wikipedia entry about the history of the concept:

In the 1960s and 1970s, Milton Friedman, in direct response to the prevailing mood of philanthropy argued that social responsibility adversely affects a firm’s financial performance and that regulation and interference from “big government” will always damage the macro economy.[13] His contention that the valuation of a company or asset should be predicated almost exclusively on the pure bottom line (with the costs incurred by social responsibility being deemed non-essential), underwrote the belief prevalent for most of the 20th century (see Friedman doctrine). Towards the end of the century, however, a contrary theory began to gain ground. In 1988 James S. Coleman wrote an article in the American Journal of Sociology titled Social Capital in the Creation of Human Capital, the article challenged the dominance of the concept of ‘self-interest’ in economics and introduced the concept of social capital into the measurement of value.[8]

There has been uncertainty and debate as to what to call the inclusion of intangible factors relating to the sustainability and ethical impact of investments. Names have ranged from the early use of buzz words such as “green” and “eco”, to the wide array of possible descriptions for the types of investment analysis—”responsible investment”, “socially responsible investment” (SRI), “ethical”, “extra-financial”, “long horizon investment” (LHI), “enhanced business”, “corporate health”, “non-traditional”, and others. But the predominance of the term ESG has now become fairly widely accepted. A survey of 350 global investment professionals conducted by Axa Investment Managers and AQ Research in 2008 concluded the vast majority of professionals preferred the term ESG to describe such data.

In January 2016, the PRI, UNEP FI and The Generation Foundation launched a three-year project to end the debate on whether fiduciary duty is a legitimate barrier to the integration of environmental, social, and governance issues in investment practice and decision-making.

This follows the publication in September 2015 of Fiduciary Duty in the 21st Century by the PRI, UNEP FI, UNEP Inquiry and UN Global Compact. The report concluded that “Failing to consider all long-term investment value drivers, including ESG issues, is a failure of fiduciary duty”. It also acknowledged that despite significant progress, many investors have yet to fully integrate ESG issues into their investment decision-making processes. In 2021, several organizations were working to make ESG compliance a better understood process in order to establish standards between rating agencies, amongst industries, and across jurisdictions. This included companies like Workiva working from a technology tool standpoint; agencies like the Task Force on Climate-related Financial Disclosures (TCFD) developing common themes in certain industries; and governmental regulations like the EU’s Sustainable Finance Disclosure Regulation (SFDR).

More recent discussions reflect the political polarization that I described in last week’s blog, starting with the suggestion that the concept should be reduced to a simple measure of emissions:

If you are the type of person who is loth to invest in firms that pollute the planet, mistreat workers and stuff their boards with cronies, you will no doubt be aware of one of the hottest trends in finance: environmental, social and governance (esg) investing. It is an attempt to make capitalism work better and deal with the grave threat posed by climate change. It has ballooned in recent years; the titans of investment management claim that more than a third of their assets, or $35trn in total, are monitored through one esg lens or another. It is on the lips of bosses and officials everywhere.

You might hope that big things would come from this. You would be wrong. Sadly those three letters have morphed into shorthand for hype and controversy. Right-wing American politicians blame a “climate cartel” for soaring prices at the petrol pump. Whistleblowers accuse the industry of “greenwashing” by deceiving its clients. Firms from Goldman Sachs to Deutsche Bank face regulatory probes. As our special report this week concludes, although esg is often well-meaning it is deeply flawed. It risks setting conflicting goals for firms, fleecing savers and distracting from the vital task of tackling climate change. It is an unholy mess that needs to be ruthlessly streamlined.

The alternative view advocates that everything should be kept except the environmental considerations:

ESG investing has been a boon for the industry. Fund managers have often promised investors higher returns while doing good with their money. However, ESG is a slippery concept, without widely accepted definitions, criteria, and metrics. Infamously, a single company’s ESG rating can vary widely between credible credit-rating firms.

That variance isn’t unreasonable. There are many ways to combine the three criteria into one score, and for any single one there can be honest disagreement about what good or bad actually looks like. For example, some might rank Shell highly on “E” because it has a plan to decarbonize its business, or poorly because it sells oil and plans to sell natural gas for years.

However, the scope for variance in environmental ratings is starting to narrow. European officials have set new rules for different categories of sustainable investments and are working on definitions of what is and isn’t green. The SEC is also working on its own set of rules. While the standards increase the compliance burden on fund managers, they should also help ensure investors are getting what they were promised, rather than just a lot of hot air.

Concerns about greenwashing—in which reality falls short of green claims—are widespread and recent events are only fanning the flames. The SEC recently fined Bank of New York Mellon $1.5 million for misleading claims about ESG funds. DWS reported far lower “ESG assets” in its most recent annual report than “ESG integrated” assets in the prior year. A whistleblower alleged last year that its disclosure was misleading. It will now be up to a new boss to draw a thicker line under the affair.

The concept of ESG is now starting to penetrate the global market. Especially important here is its context within the Chinese market:

A new set of voluntary guidelines for Chinese companies to report environmental, social and governance metrics take effect Wednesday, offering a glimpse of what mandatory disclosures might eventually look like in the country.

Developed by China’s biggest companies and government-backed think tanks, the standards list more than 100 metrics that generally align with the global benchmark of draft rules issued by the International Sustainability Standards Board. The differences are they’re more simplistic and add “Chinese characteristics” that measure things like corporate charity.

Below is a summary in the form of advice from the Harvard Business Review:

With the rush of money into ESG investment funds — more than $1 trillion in the last two years — it’s easy to think everyone clearly sees the business value of sustainability. But many leaders still see an inherent trade-off between choosing a more sustainable future and achieving business growth and profit. They see ESG-related spending — a capital expense to reduce energy use, opting for renewable energy, paying living wages, and so on — as purely cost, not investment. With little resistance, CEO’s will spend money on IT, training, new factories, R&D, and more; but when it comes to investing in the future of the business and humanity, they hesitate.

Go to the original publications and form your own opinion!

Micha Tomkiewicz, Ph.D., is a professor of physics in the Department of Physics, Brooklyn College, the City University of New York. He is also a professor of physics and chemistry in the School for Graduate Studies of the City University of New York. In addition, he is the founding-director of the Environmental Studies Program at Brooklyn College as well as director of the Electrochemistry Institute at that same institution.
View all posts by climatechangefork →
This entry was posted in Economics, Sustainability and tagged assets, China, Climate Change, Economics, Economy, environmental, ESG, ethical, Future, Gas, governance, Government, green, greenwash, Investment, Market, Milton Friedman, oil company, renewable energy, social, social capital, Sustainability, Sustainable, value. Bookmark the permalink.