Posted on September 13, 2022 by climatechangefork 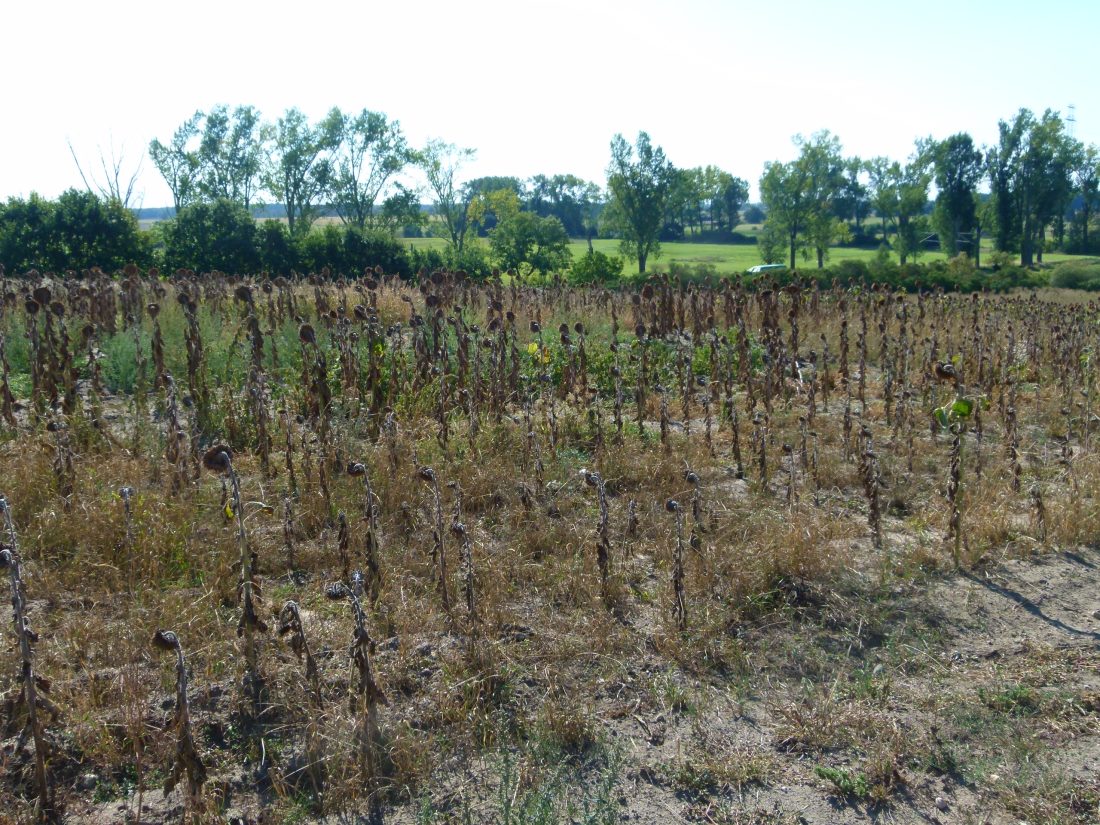 A field of dead sunflowers  in Farsleben, Germany

I have described Germany’s energy transition in earlier blogs (December 9 – 30, 2014, and October 1 – 8, 2019). As I mentioned in last week’s blog, I followed my trip to England, Poland, and France by teaching the first week of classes in Brooklyn before returning to Europe for a few days. I went to Germany for a delayed celebration of the liberation of Bergen-Belsen, the concentration camp in which I spent the second half of WWII.

Germany was recently in the middle of the news until recently, when were told about the death of Queen Elizabeth II. The country was bound to return to the news, however, as Russia chokes Europe’s gas supply in advance of the approaching winter. As Paul Krugman wrote in the NYT:

There is, however, one exception, and it’s a doozy: European natural gas.

Unlike the markets for oil and wheat, the market for gas isn’t fully global. The cheapest way to ship gas is normally via pipelines, which breaks the world into separate regional markets defined by where the pipelines run. The main alternative is to ship gas in liquefied form, which is how it gets to markets not served by pipelines, but this requires specially designed shipping and terminals, which can’t be added rapidly in a crisis.

Germany is Europe’s largest economy and, as I’ve mentioned in earlier blogs, it was among the leaders of the shift to a more sustainable energy mix. Not only did it reduce its dependence on coal but it also made attempts to eliminate its dependence on nuclear power after the Fukushima accident in Japan in 2011. As I mentioned in those earlier blogs, Germany decided to replace these with enhanced development of sustainable energy sources such as solar and wind. Its alternative sources also included low-cost natural gas imported from Russia (see the February 8, 2022 blog on Petrostates), thus opening the country to energy blackmail from Russia. We saw this come into play after Germany tried to help Ukraine fight a Russian takeover following the February 24th invasion.

Since energy prices tend to be international and largely based on supply and demand, Germany, along with most of Europe, the US, Japan, and others found itself confronting the other aspect (besides carbonization of the atmosphere) of the energy transition: resilience. Nobody can live without an affordable energy supply.

While all of this takes place, the heating of the planet continues to accelerate. As I have mentioned repeatedly (put water in the search box), one of the most important consequences of the temperature rise has been water cycle vulnerabilities, including water stress caused by prolonged droughts and major floods caused by major downpours, snow melting, or a rise in sea level. The prolonged droughts in Europe, California, and China, and the devastating floods in Pakistan that are now hitting the planet are early signs of what we can expect for the future:

Severe droughts across the Northern Hemisphere—stretching from the farms of California to waterways in Europe and China—are further snarling supply chains and driving up the prices of food and energy, adding pressure to a global trade system already under stress.

Parts of China are experiencing their longest sustained heat wave since record-keeping began in 1961, according to China’s National Climate Center, leading to manufacturing shutdowns owing to lack of hydropower. The drought affecting Spain, Portugal, France and Italy is on track to be the worst in 500 years, according to Andrea Toreti, a climate scientist at the European Commission’s Joint Research Center.

The dead sunflowers at the top of this blog, which I encountered during my visit to Germany, serve as a visual example of the phenomenon’s impact. The drought in Europe has an additional negative impact on its energy supply: it has greatly affected the operation of the many dams that generate hydropower and has had negative consequences for nuclear power stations, which depend on river flow for cooling.

The biggest worry is the expectation of scarcity of heating during the coming winter. Since most energy prices are based on supply and demand, such scarcity likely means very high prices that the rich can afford but the less wealthy cannot:

European energy prices surged after Russia shut down natural-gas flows through a major pipeline, threatening to add to economic woes for businesses and households across the continent.

Natural-gas futures in northwest Europe, which reflect the cost of fuel in the wholesale market, jumped more than 30% in early trading Monday. They remain below the all-time high recorded in late August.

State-controlled Gazprom PJSC extended a halt to flows through Nord Stream late Friday. Moscow blamed the suspension on technical problems. European governments described it as an economic attack in retaliation for their support of Ukraine.

Over the weekend, governments in Sweden and Finland offered billions of dollars of guarantees to utilities to prevent a meltdown in energy trading. Officials fear the loss of imports through Nord Stream could lead to a further leap in power prices and saddle utilities with cash payments to energy trading exchanges that they may struggle to meet. A wave of failed payments could undermine financial stability, officials said.

“This has had the ingredients for a kind of a Lehman Brothers of energy industry,” Finland’s Economic Affairs Minister Mika Lintilä said Sunday.

Another variant on the same topic is that governments will likely have to intervene.

The Days of Energy Deregulation Are Over in Europe

After decades of promoting a free-market approach to the electricity and natural gas industries, European governments are taking back control of these vital functions. Record-high energy prices, partly the result of Russia’s throttling of gas supplies, are prompting lawmakers to discard economic orthodoxy and undo years of painstaking deregulation.

Britain, perhaps the most market-oriented of the large European countries, is taking one of the biggest steps in this direction. Prime Minister Liz Truss, on her third day in office on Thursday, announced a plan to, in effect, freeze energy bills for two years for consumers and six months for business.

The intervention, with an estimated cost to the government of as much as 150 billion pounds ($172 billion), would prevent household energy bills from rising about 80 percent next month, potentially slowing the country’s double-digit inflation rate. In recent years, Britain has had a regulated price cap on energy for households, but there is growing political consensus that it is not up to dealing with the extremes of current markets, where prices for natural gas and electricity have reached several times their norms.

At the same time, the European Union has proposed a cap on Russian gas prices and negotiations with Norway, another large, but friendly, gas supplier. Because natural gas-fired power plants usually set electric power prices, Brussels wants to impose a tax on generators from non-gas sources, like wind and nuclear, whose operating costs are lower, and use that revenue to help people and companies struggling with energy costs.

Everyone agrees that the best solution to the shortages and the high energy prices is to use less energy to produce the same outputs (collectively, measured in GDP). This means reducing the energy intensity, defined as energy/GDP (see the May 7, 2019 blog). Major steps are being taken in this direction, however, most of them are in the form of “recommendations” not mandates. In Germany, these include reduced temperatures for heating and increased temperatures for air-conditioned cooling. They also turn off streetlights and the illumination of monuments. Everywhere, you see increased availability and use of bikes and scooters. Significantly, in Germany, the recommendations for saving energy don’t include reducing speed on the autobahns.

The proposed price intervention by governments is controversial because of the belief by many economists that high prices reduce use, while lower prices encourage it. The subsidized energy use reminds all of the practices of many poor countries: even under more “normal” conditions, people in such countries can’t afford to buy fuel. Now, the high prices are basically determined by a conflict between two blocs of rich countries. Protests in Indonesia have come to remind us of this asymmetry.

The shape of the world that will be left after the conflict between Russia and the West is settled, is yet to be determined.

Micha Tomkiewicz, Ph.D., is a professor of physics in the Department of Physics, Brooklyn College, the City University of New York. He is also a professor of physics and chemistry in the School for Graduate Studies of the City University of New York. In addition, he is the founding-director of the Environmental Studies Program at Brooklyn College as well as director of the Electrochemistry Institute at that same institution.
View all posts by climatechangefork →
This entry was posted in Energy, Extreme Weather, Russia/Ukraine, Sustainability and tagged air conditioner, cooling, Demand, Drought, Economics, Economy, Energy, energy transition, EU, Europe, Flood, Gas, Germany, heat, heating, Hydropower, Market, nuclear power, Oil, Renewable, resilience, Russia, Supply, Transition, Ukraine, Wind. Bookmark the permalink.

2 Responses to Back from Germany