Let’s get back to vulnerabilities, focusing specifically on the oceans this time. Since they cover 70% of the planet, the health of our oceans is paramount. The connections between anthropogenic climate change and said health are complex and multifaceted, so I’ll spread the topic out over the next few weeks. 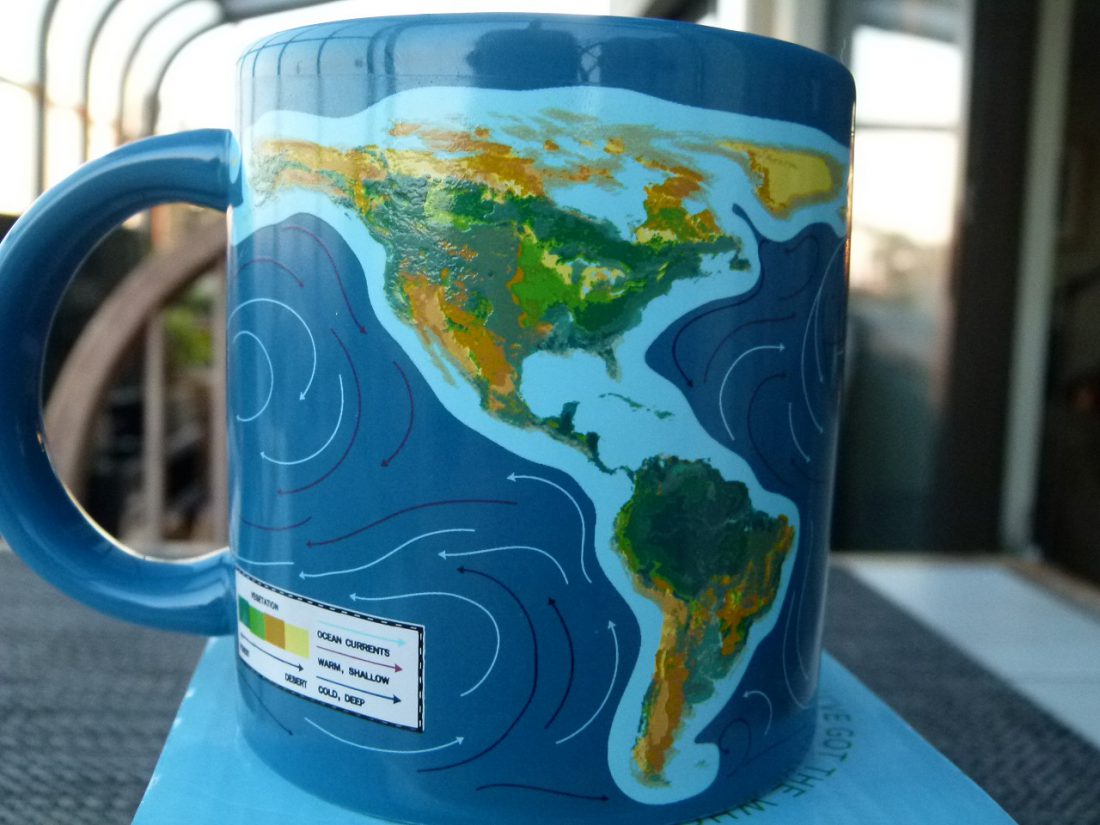 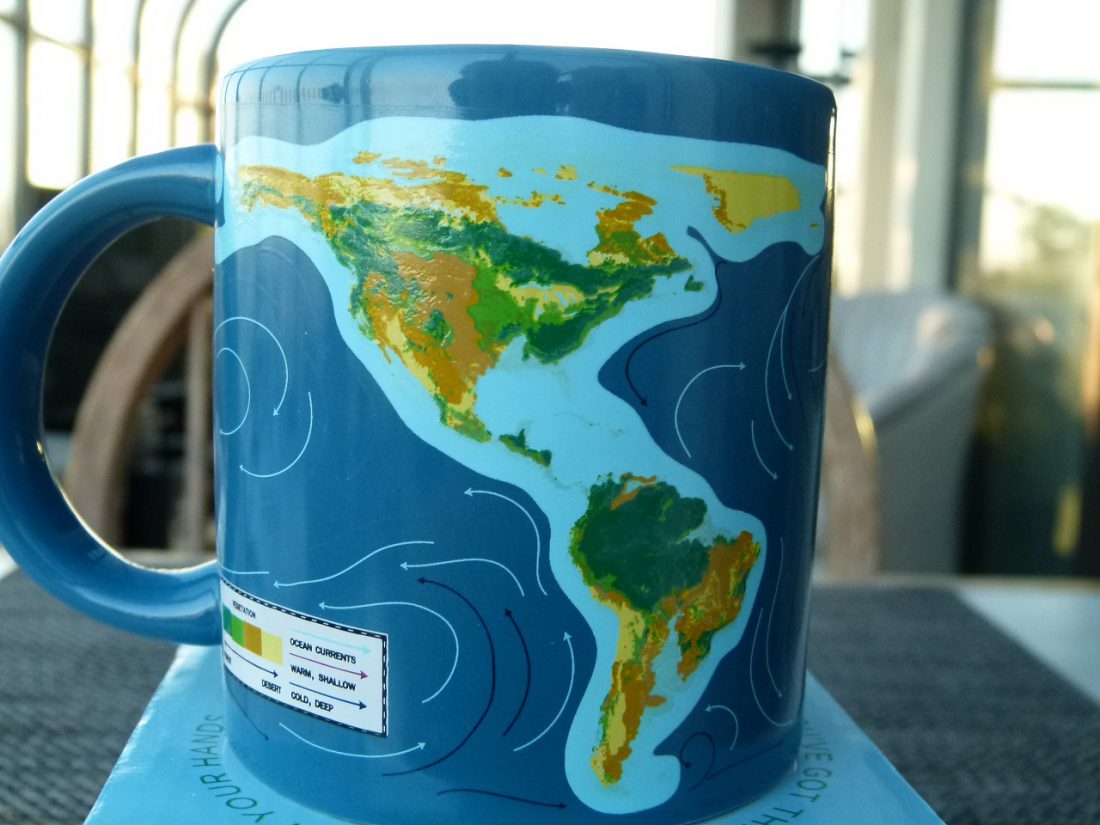 The coffee mug above was given to me by a graduating student who presented her thesis, “A Heated Atmosphere: Driving Forces in American Attitude Toward Anthropogenic Climate Change,” at Brooklyn College’s Science Day (May 4, 2018).

As you can see, the hot coffee inside the mug changes the map, enlarging deserts, shrinking forests, and illustrating other major transformations to the planet’s geography. It shows the effects of sea level rise, including the disappearance of Florida, Cuba, and much of Central America. Of course the mug is a gimmick but it is a thought provoking one that starts interesting and productive conversations with our guests.

I have repeatedly invoked doomsday scenarios (see an extended series from August 29 – October 10, 2017) and assessed extinctions in the Anthropocene (February 3, 2015). I tried to analyze the methods used to predict some of these scenarios and the role that climate change plays in these predictions. The February 3, 2015 blog, partially based on a publication in Science magazine that discussed marine defaunation, included some of the most striking projections.

Figure 1 shows the predicted timeline of changes, both on land and in the oceans, and the following paragraph from the same blog post offers some explanation:

I mentioned that article, “Marine Defaunation: Animal Loss in the Global Ocean,” (Science, 347, 247 (2015)) last week, together with the book The Sixth Extinction by Elizabeth Kolbert. Both publications deal with species extinctions of the past, present, and future. The picture shows an artist’s representation of how the world once looked and how it might look in the future, both on land and in the ocean. As always, there is no way of knowing what the future will actually bring; the best we can do is to base our suppositions on models that we hope can inform us about what the future will entail. In this case, the picture’s scope extends from 50,000 years ago – the approximate time that early modern humans started to spread from Africa to Asia and Europe – to toward the end of this century.

A few days ago, a team published its results from using geological and physics-based tools in a different context. The researchers weren’t aiming to predict the future but rather trying to figure out the reasons for one of the most devastating global extinctions in history: the Ordovician-Silurian extinction, which took place about 450 million years ago. Here’s Wikipedia’s blurb on what we know about it:

The Ordovician–Silurian extinction events, when combined, are the second-largest of the five major extinction events in Earth’s history in terms of percentage of genera that became extinct. This event greatly affected marine communities, which caused the disappearance of one third of all brachiopod and bryozoan families, as well as numerous groups of conodonts, trilobites, and graptolites.[1] The Ordovician–Silurian extinction occurred during the Hirnantian stage of the Ordovician Period and the subsequent Rhuddanian stage of the Silurian Period.[2] The last event is dated in the interval of 455–430 Ma ago, i.e., lasting from the Middle Ordovician to Early Silurian, thus including the extinction period.[3] This event was the first of the big five Phanerozoic events and was the first to significantly affect animal-based communities.[4]

The new analysis was published in the Proceedings of the National Academy of Science (PNAS), one of our country’s most prestigious and selective scientific publications. Below is the authors’ synopsis:

The Late Ordovician mass extinction (LOME) terminated one of the greatest biodiversity radiations in Earth history eliminating ∼85% of marine animals, and it is coincident with the first major glaciation of the Phanerozoic. To evaluate LOME origins, we use uranium isotopes from marine limestones as a proxy for global-ocean redox conditions. Our results provide evidence of an abrupt global-ocean anoxic event coincident with the LOME onset and its continuation after the biologic recovery, through peak glaciation, and the following early Silurian deglaciation. These results also provide evidence for widespread ocean anoxia initiating and continuing during icehouse conditions.

The essence of this finding is that the massive global extinction took place because of major oxygen deprivation in the ocean, which basically suffocated every living organism that needed the element for respiration. This included photosynthetic organisms that require oxygen for respiration when the sun is not shining. One of the technical terms for such oxygen deprivation is anoxia:

Oceanic anoxic events or anoxic events (anoxia conditions) refer to intervals in the Earth’s past where portions of oceans become depleted in oxygen (O2) at depths over a large geographic area. During some of these events, euxinia, waters that contained H2S hydrogen sulfide, developed.[2] Although anoxic events have not happened for millions of years, the geological record shows that they happened many times in the past. Anoxic events coincided with several mass extinctions and may have contributed to them.[3] These mass extinctions include some that geobiologists use as time markers in biostratigraphic dating.[4] Many geologists believe oceanic anoxic events are strongly linked to slowing of ocean circulation, climatic warming, and elevated levels of greenhouse gases. Researchers have proposed enhanced volcanism (the release of CO2) as the “central external trigger for euxinia”.[5]

The trigger for the anoxia 450 million years ago was most likely major volcanic eruptions in and around what we now call Siberia. Humans were obviously not a factor then but we are an important one now. Decline in the oxygen content of the oceans is already being recorded but there are other ocean impacts that can lead to the same results (i.e. mass extinctions). The next few blogs will explore some of the specifics, including what we can do to try to mitigate the situation and slow down or limit the already occurring sixth mass extinction.