Posted on August 20, 2019 by climatechangefork

About three months ago (May 14, 2019) I featured a student-written guest blog on income inequality. That blog centered on transportation. It wasn’t the first time that we have addressed the issue on Climate Change Fork. Previous blogs that focused on the issue include:

August 4, 2015: China – The Price of Progress: Inequality and Transparency

May 14, 2019: Guest Blog: How Income Inequality Correlates with CO2 Emissions and What We Can Do About It

We are now, slowly but loudly, approaching the 2020 presidential election. Finally, climate change is becoming an important part of the agenda for many aspirational politicians—not only in the US but also abroad. While these candidates are not confined to the left-of-center subset, they mainly emerge from that direction. In many cases, this ties in to that part of the political spectrum increasing its focus on remediating the growing income inequality. The recent dialogues about the Green New Deal (see the February 19th blog) are a good example. Green jobs are a tantalizing promise. However, in all these discussions, what we are missing are direct, quantitative connections between these two issues. This shortcoming leaves the impression in many quarters that presenting the two issues as intertwined is more of a publicity stunt (“look at what good people we are!”) than an actual means of addressing strategies to solve societal issues.

I don’t think this has to be the case. I will try in this blog to identify some of the missing direct connections between the trends—especially in cases where the two are so intertwined that we cannot address one of these trends without also referencing the other.

I found a fitting new phrase that describes the intersection between income inequality and climate change: BBC reported on the recently coined term, “climate apartheid.”

A UN expert has warned of a possible “climate apartheid”, where the rich pay to escape from hunger, “while the rest of the world is left to suffer”.

Even if current targets are met, “millions will be impoverished”, said Philip Alston, the UN’s special rapporteur on extreme poverty.

“Ticking boxes will not save humanity or the planet from impending disaster,” Mr Alston warned.

The Australian native is part of the UN’s panel of independent experts, and submitted his report – which is based on existing research – to the UN Human Rights Council on Monday.

I find the article and expression accurate and engaging. I have talked before about climate refugees and have no doubt that many in such situations as described above will soon be forced to flee their homes in search of the resources essential to their survival. The emphasis in the UN was on rich and poor countries but the divide also applies to smaller units.

Figure 1 shows a plot of the global income distribution, based on OECD (Organization for Economic Co-operation and Development) data: 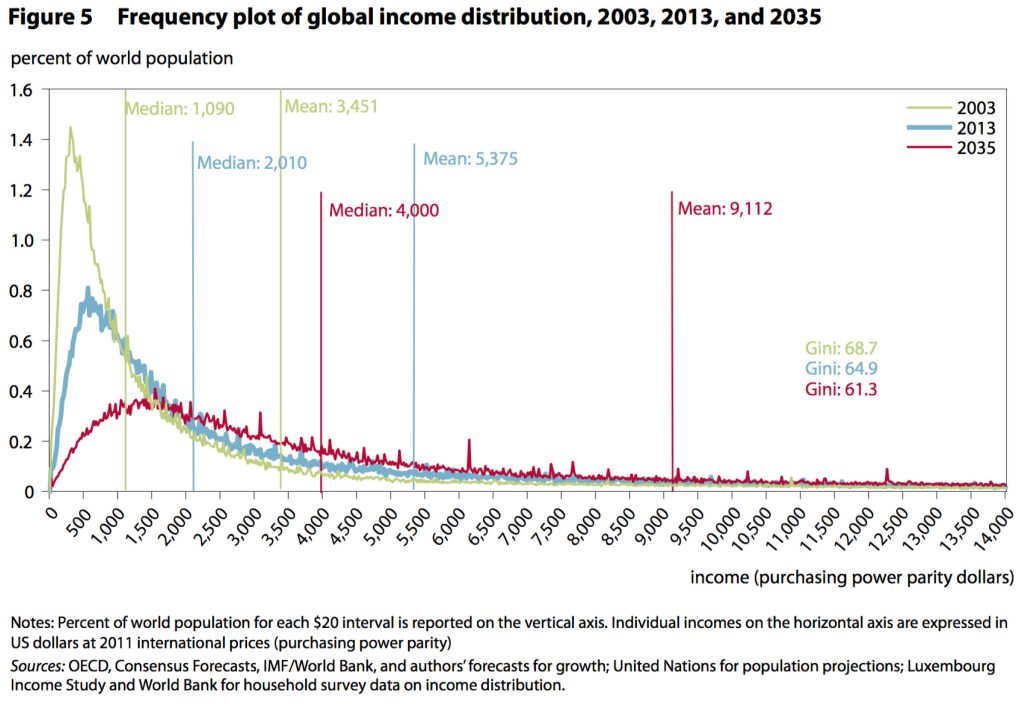 You can see from the graph that in 2003 almost 1.5% of the world population earned roughly $400. Ten years later in 2013, the number of people with a similar income was only half of that. By 2035, the OECD projects that only about 0.4% (the highest plurality for the year) will earn between $1,000-2,000. I’m not sure if these numbers are adjusted for inflation but we can see that the trend is more money going to fewer people, especially as we look farther down the graph to where only a few individuals hold most of the money.

I have discussed the Gini coefficient before as a measure of inequality, specifically in the context of China (August 4, 2015); 0 is completely equal and 1 is completely unequal (one guy owns everything). In this case, the Gini values are represented in percentages. The world is a very unequal place.

To determine the impact of such unequal distribution on climate change, one must first figure out individuals’ expenses as a function of their incomes. To do this globally would be basically impossible. It would, for example, have to include considerations such as currency conversion and large differences in tradition and preference. Fortunately, the US census survey has provided an example:

In the categories that obviously result in carbon emissions, such as food, utilities, and gasoline consumption, one can see saturation in expenditures for larger income brackets—those who can pay for the fanciest versions of everything. However, as we covered in the graph above, there are significantly fewer people in those brackets and the smaller numbers at the bottom add up quickly. In other words, the much larger numbers of lower income people will emit considerably more than the small number of high-income people, thus continuing the drivers of climate change. Increasing equality will mean contributing resources to low-polluting activity, thereby decreasing the carbon intensity of the world (pollution divided by GDP).