Posted on February 23, 2021 by climatechangefork

I have written often about resilience and its importance in our energy transition. You can put the word into the search box and see a plethora of posts. Most of them focus on California and Australia, where climate change has triggered uncontrollable summer fires. Now, in mid-winter, Texas joins the list of places overpowered by extreme weather:

Electricity was restored to most Texans who had lost power after a winter storm, but water systems for nearly two-thirds of residents were disrupted, leaving millions without drinkable water.

Major disruptions to the Texas power grid left more than four million households without power this week, but by Thursday evening, only about 347,000 lacked electricity. Much of the statewide concern had turned to water woes.

More than 800 public water systems serving 162 of the state’s 254 counties had been disrupted as of Thursday, affecting 13.1 million people, according to a spokeswoman for the Texas Commission on Environmental Quality.

In Harris County, which includes Houston, the nation’s fourth-largest city, more than one million people have been affected by local water systems that have either issued notices to boil water so it is safe to drink or that cannot deliver water at all, said Brian Murray, a spokesman for the county emergency management agency.

Residents in the Texas capital, Austin, were also told to boil water because of a power failure at the city’s largest water-treatment facility. The director of Austin Water, Greg Meszaros, said that plummeting temperatures caused water mains to break and pipes to burst, spurring an increase in water usage and allowing water to leak out of the system.

This phenomenon of global warming extending cold spells in historically temperate places has been documented. Some of us remember the blockbuster 2004 movie, “The Day after Tomorrow,” which illustrated the extremes of such trends (see my February 23, 2016 blog). The Arctic is warming twice as quickly as the rest of the world. This warming increases the chances that frigid arctic polar air will shift the jet stream and move southward. The movie was a bit exaggerated, especially in terms of timing, but what’s happening in Texas is real. It is likely that the frequency of cold waves in unusual places, such as Texas, will increase with climate change. As the temperatures drop below zero for an extended period of time, the existing infrastructure freezes around almost everything, including natural gas facilities, coal and nuclear power facilities, and wind farms. Any place where water flows is vulnerable to freezing.

In spite of warning signs, the state was woefully unprepared:

For scientists, the havoc wreaked by the extreme winter weather that hit Texas in mid-February–dropping several inches of snow and leaving millions without power –did not come as a surprise. Ten years ago, in 2011, energy regulators warned the state’s electric-grid operators that they were ill-prepared for an unprecedented winter storm. And for decades before that, climate scientists had cautioned that a warming planet would cause climate chaos, raising the average global temperature while driving unusual weather events like this one. For Texas, it was always just a matter of time.

Despite these warnings, the state was unprepared–which Texans realized as soon as the storm swept in. Equipment froze at power plants, leaving about half of the state’s electricity-generating capacity offline. Natural gas wells iced over, slowing the fuel supply that heats homes. Millions were left without electricity, at least one city turned off its water supply, and Harris County, where Houston is located, reported hundreds of cases of carbon monoxide poisoning as Texans turned on their own generators to warm up. “This shows a disastrous level of under   preparation,” says Daniel Cohan, an associate professor of civil and environmental engineering at Rice University in Houston, speaking to TIME shortly after he had lost water pressure. “We knew this weather event was coming … What went wrong?”

The catastrophe can be linked to a string of planning failures that didn’t take that threat seriously. Much of the electricity infrastructure in Texas wasn’t hardened–think of insulation and other protections that allow it to function in extreme winter weather. Several power plants remained offline for scheduled maintenance, ignoring weather forecasters’ warnings of the fast-approaching storm. And the storm disrupted the supply of fuel needed to run other such plants.

Well, more than half of the country that sits north of Texas regularly experiences such sub-freezing temperatures during the winter, without the catastrophic consequences that Texas is currently experiencing. Why can’t Texas learn from them? Good question. The main reason is that the authorities in Texas didn’t believe that these problems would hit “them” (See my November 17, 2020 blog about “them” vs. “us”). Texas was prepared for hot summers but not for cold winters. When the weather system and its accompanying problems inevitably came, like Don Quixote, they blamed the windmills. 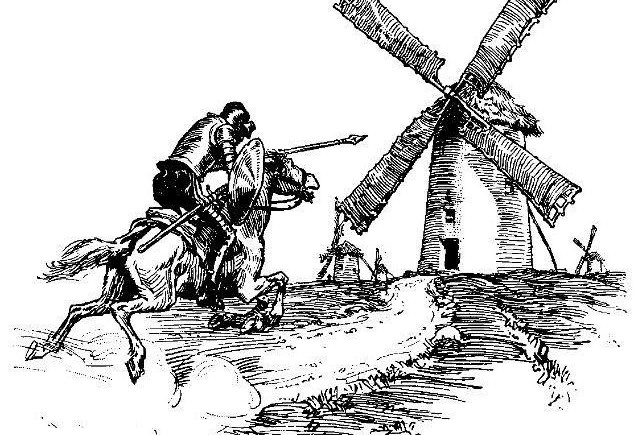 “No, Wind Farms Aren’t the Main Cause of the Texas Blackouts”

As his state was racked by an electricity crisis that left millions of people without heat in frigid temperatures, the governor of Texas took to television to start placing blame.

His main target was renewable energy, suggesting that the systemwide collapse was caused by the failure of wind and solar power.

“It just shows that fossil fuel is necessary for the state of Texas as well as other states to make sure we will be able to heat our homes in the winter times and cool our homes in the summer times,” said Gov. Greg Abbott, speaking on Sean Hannity’s show on Fox News. Other conservative talk-show hosts had already picked up the theme.

However, wind power was not chiefly to blame for the Texas blackouts. The main problem was frigid temperatures that stalled natural gas production, which is responsible for the majority of Texas’ power supply. Wind makes up just a fraction — 7 percent or so, by some estimates — of the state’s overall mix of power generation this time of year.

Gov. Abbott’s false attribution shows a marked refusal to listen to scientists. Unfortunately, ignoring a problem does not make it go away. Nor is Texas alone. These extreme weather occurrences are only going to get stronger and more frequent. To prepare for the ever-escalating consequences of climate change in every season, we need to build resiliency into the system. The Federal Reserve is advocating this change:

As Winter Sweeps the South, Fed Officials Focus on Climate Change. A top Federal Reserve official says climate scenario analysis could be valuable in making sure that banks mind their climate-tied weak spots.

A top Federal Reserve official issued a stark warning on Thursday morning: Banks and other lenders need to prepare themselves for the realities of a world racked by climate change, and regulators must play a key role in ensuring that they do.

“Climate change is already imposing substantial economic costs and is projected to have a profound effect on the economy at home and abroad,” Lael Brainard, one of the central bank’s six Washington-based governors, said at an Institute of International Finance event.

This is almost an identical observation to the one I cited on the January 14, 2020 blog. Our homes, jobs, food supply, and many other essential elements of our lives are vulnerable to the effects of climate change. It’s high time we start paying attention.

Micha Tomkiewicz, Ph.D., is a professor of physics in the Department of Physics, Brooklyn College, the City University of New York. He is also a professor of physics and chemistry in the School for Graduate Studies of the City University of New York. In addition, he is the founding-director of the Environmental Studies Program at Brooklyn College as well as director of the Electrochemistry Institute at that same institution.
View all posts by climatechangefork →
This entry was posted in Climate Change, Electricity, Energy, Extreme Weather, Sustainability, US, Water and tagged Adaptation, arctic melt, Australia, California, Climate Change, Coal, Don Quijote, Electricity, energy transition, Extreme Weather, fossil fuel, freeze, Gas, Global Warming, nuclear power, Renewable, renewable energy, resilience, Solar, storm, Texas, Water, Wind, windmill, winter, winterize. Bookmark the permalink.