Posted on June 14, 2022 by climatechangefork

In almost every news broadcast, fuel inflation holds the top spot. This is not surprising. With an energy inflation growth of around 30% per year (see Figure 1) and the average price of gasoline at around $5/gallon (occasionally up to $10/gallon in parts of California), consumers are unhappy. Almost every report on the issue includes comments from consumers that they cannot support a government that has allowed (or is causing) such increases and if given a chance they will vote for people that are not part of the current administration. However, in a recent interview, Gina Raimondo, the US Commerce Secretary, responded to the issue:

Commerce Secretary Gina Raimondo conceded Tuesday that there is not much more the White House can do to tackle record high gas prices for Americans, casting blame on Russia’s invasion of Ukraine.

“Unfortunately, that is the brutal reality,” Raimondo said in response to CNN’s Kate Bolduan saying there’s not much action left that President Joe Biden can take.

In this blog, I will try to analyze the situation and the challenges that it invokes.

Figures 1 and 2 summarize the timelines. For reference, President Biden was inaugurated on January 20, 2021. That same month, effective vaccination for COVID-19 started to become available within the US, less than a year after it was declared a global pandemic. 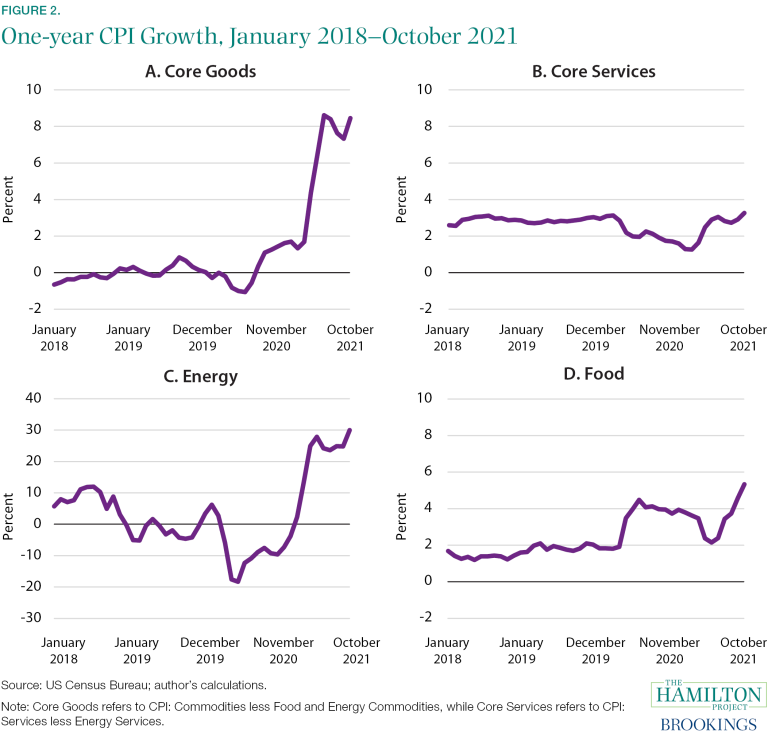 The key part of Figure 1 is the energy price (C). It underlines all other inflation markers. The only marker that seems not to be affected is the Core Services (B), but that might well just involve a time-lag marker in the case that inflation persists. An important aspect of the data that is directly linked to the energy inflation markers is its globality. Recent data show that the inflation rate is at about the same level of above 8% both in Europe and the US. The inflation levels in many developed countries are significantly higher because they are sensitive to the exchange rates with global trading currencies such as the US$ and the Euro. For example, the inflation rate in Brazil exceeds 12% and in Turkey, it is around 75%.

As I have mentioned before, the start of the changes in the energy prices coincided with two events: the inauguration of President Biden and the availability of effective vaccines against the COVID-19 pandemic. Republicans, not surprisingly, point to the former; the globality of the phenomenon strongly suggests the latter.

Figure 2 shows the expansion of the changes in oil prices over the last 10 years. In a sense, it is the extension of earlier changes in oil prices in response to political events that had a strong influence on global oil prices. My January 13, 2015 blog, in particular, discusses the changes in oil prices between 1947 and 2015. That blog shows that toward the end of 2014, the price reached negative territory. Namely, it cost the oil companies more to store oil than they could recoup from selling it. Figure 2 shows a minimum but not a negative number. This might be due to a different reference for the value of the US$. However, Figure 2 shows that toward the end of 2020, at the height of the pandemic, when everything was at a global stand-still, with no relief in sight, the oil price reached a minimum that was considerably lower than that of late 2014. The energy inflation in the marker in Figure 1 is plotted against that minimum.

Figure 2 – Timeline of oil prices over the last 10 years

Figure 1 doesn’t show what happened in 2022 after the February 24th Russian invasion of Ukraine. Suddenly, Europe, much more than the US, has found itself dependent on an energy supply from a country that is a major security risk to the existence of many of its members. As I discussed earlier this year (February 8, 2022), energy export is a major income generator that fuels Russia’s military. The need to change Europe’s role in this became immediate. Energy “independence” has become a rallying cry. Energy security became another face of the energy transition—not dependence on a few petrostates but control of a country’s own energy supply and ability to create alliances based on it. The transition, on this level, starts in Europe. Europe was also at the forefront of the climate change-related energy transition, acknowledging its need to decarbonize its energy sources.

After President Biden’s inauguration, American policy too began to join in the transition, as symbolized by an immediate return to the Paris agreement, with commitments to decarbonize completely toward mid-century and decarbonize its electricity supply by 2035. These have now became long-term commitments. Meanwhile, the immediate goal is to use everything short of military action to deprive Russia of its energy income and disable it from military expansion. In view of the much greater dependence of Europe on Russian energy supply, the President of the European Commission, Ursula von der Leyden, visited the White House to outline a joint strategy on how the US can help Europe in the transition without resorting to steps that impact the longer-term transition to sustainable energy. The document cited below shows the results:

This Task Force for Energy Security will be chaired by a representative from the White House and a representative of the President of the European Commission. It will work to ensure energy security for Ukraine and the EU in preparation for next winter and the following one while supporting the EU’s goal to end its dependence on Russian fossil fuels.

The emphasis of the document is on diversifying supply, reducing demand, and strengthening the transition to sustainable energy. Everybody at the meeting fully realized that direct commitments by governments require a transformation of these guidelines into policy. This, by necessity, involves major political persuasion. The options are very complex. As I argued in the last blog, in complex situations, it is much easier to vote “against” something as opposed to “for.” Republicans are currently using the word “inflation” at every opportunity. It is effective. In last week’s blog, I mentioned the recent House Republicans’ related approach:

An example of this strategy for voting “against” something can be seen in the new House Republican platform:

It can be summarized as “drill, drill, and drill some more.” The plan helps reduce dependence on Russian oil but does so by endangering the longer-term energy transition to decarbonized energy sources. It’s a complex issue and I will try to follow along with the process.

In future blogs, I will try to respond to Commerce Secretary Gina Raimondo’s comment that I mentioned at the opening of this blog: that governments basically have very few tools left to directly impact the energy supply part of the energy inflation, and try to make the case that all of us have a major role in directly impacting the energy demand part of the equation.