Posted on September 20, 2016 by climatechangefork 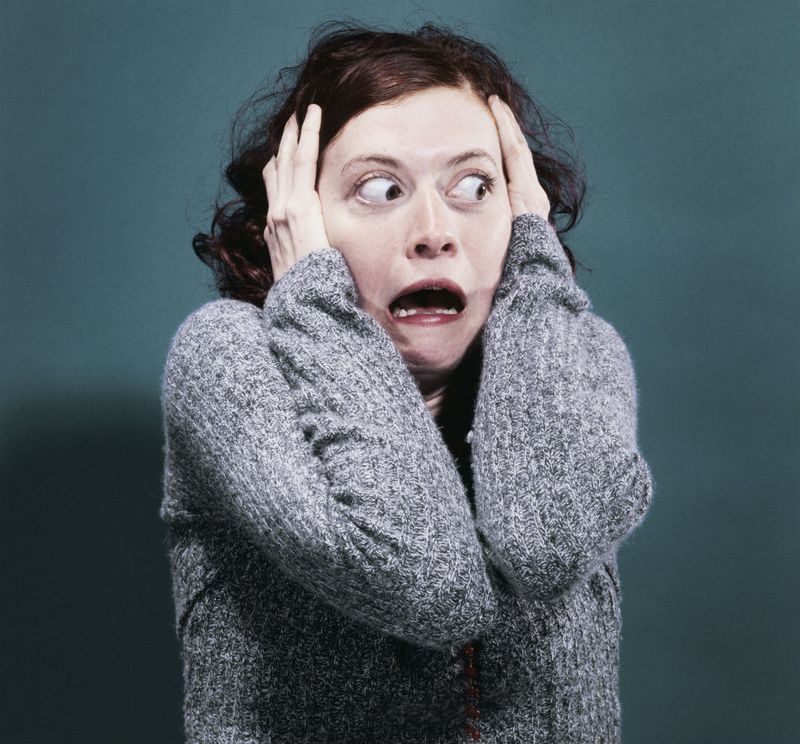 This election, as characterized by the media, is dominated by fear:

The vast majority of Americans say they are afraid of at least one of the two major candidates — Hillary Clinton or Donald Trump — winning the White House, a remarkable finding that reflects an unsettled nation unhappy with its choice.

Eighty-one percent of Americans say they would feel afraid following the election of one of the two polarizing politicians, according to a new Associated Press-GfK poll. That includes a quarter who say it doesn’t matter who wins: they’re scared of both.

Three-quarters of voters say their pick for president is motivated by a desire to cast their Election Day ballot against Clinton or Trump, more than those who say they’re voting for the candidate who shares their positions on the issues or is the most qualified to hold the office.

Not only do the two candidates invoke fear, they actively encourage fear of their opponents as a main campaign strategy. The fear is also sectarian. Even among conservatives, those that belong to minorities – be they religious, such as Muslims and Jews, or racial, such as Hispanics and African Americans – are reluctant to support the Republican candidate. What they hear from him is that his version of nationalism – “American First” – doesn’t include them.

I am supporting Hillary Clinton in the presidential election. I am doing so because I think that she is highly qualified to be president and Donald Trump is not. But I am not afraid of him. I think that the US is strong enough to survive four years of a Donald Trump presidency. If he is elected, I’ll be much more scared of the power of the people who voted him into office. In this sense I do fear the people but since I am not the government, I don’t think this is a sign of liberty.

As I have mentioned many times over my four years blogging here, my world view is shaped in large part by my early experiences as a Holocaust survivor. I am doing what I can to prevent a repeat in whatever form it might take. I am not trying to compare Donald Trump to Adolf Hitler here. Frankly, I think that in spite of my view that Trump is unfit to be the US president, he is much better qualified to take this job than Hitler was to be elected Chancellor of Germany.

The German people were very angry and they needed somebody to blame for their misfortune. The Nazi party formed after the German defeat in the First World War and the humiliating Versailles treaty that followed. The Nazis advocated extreme nationalism and blamed the Jews as a convenient scapegoat for all their misfortunes. Hitler rose in the party because he was an excellent demagogue and willing to use force to get his way. The German people accepted this bargain. The result was that 3% of the World population was slaughtered (60 million out of a then global population of 2 billion). Anybody interested in the national composition of the massacre is welcome to visit this summary.

Hitler didn’t have nuclear weapon at his disposal; Donald Trump will. Anybody willing to put those controls in his hands allows for the possibility of a global nuclear suicide.

As in post WWI Germany, all of this will be driven by desperation and hate. Not on Trump’s part – his motivation is purely egotistical – but by the people that put him into power. Matt Bevin, Governor of Kentucky, illustrated the mindset of some of Trump’s supporters:

Speaking to the annual Values Voter Summit on Saturday in Washington, Bevin said he was asked if the country could ever recover if Clinton were elected president.

“I do think it would be possible, but at what price? At what price? The roots of the tree of liberty are watered by what? The blood, of who? The tyrants to be sure, but who else. The patriots,” Bevin said, referencing a quote from Thomas Jefferson. “Whose blood will be shed? It may be that of those in this room. It might be that of our children and grandchildren. I have nine children. It breaks my heart to think it might be their blood that is needed to redeem something, to reclaim something that we through our apathy and indifference have given away.”

The general stereotype of Trump supporters targets similar segments of the American population:

Journalists found that in the counties where Trump is most dominant, there are large numbers of white high school dropouts, and unemployed people no longer looking for work. An alliance with the incoherent personality cult of Donald Trump’s candidacy correlates strongly with failure to obtain a high school diploma, and withdrawal from the labor force. The counties also have a consistent history of voting for segregationists, and have an above average percentage of its residents living in mobile homes. Many conservatives, and even some kindhearted liberals, might object to the conclusions one can draw from the data as stereotyping, but the empirical evidence leaves little choice. Donald Trump’s supporters confirm the stereotype against them. The candidate himself even acknowledged the veracity of the caricature of his “movement” when he made the odd and condescending claim, “I love the poorly educated.” His affection for illiteracy and ignorance did not extend to himself or any of his children, all of whom have degrees from some of the best universities in the world.

The low-educated, low-income counties of Trump’s America also receive large sums of public assistance. Social Security fraud – seeking disability payments for minor injuries or conditions – is so rampant that attorneys have created a cottage industry out of offering to secure services for clients willing to pay a one-time fee for longtime subsidy.

It is almost impossible to find an objective characterization of the makeup of support for either of the two main candidates in this polarizing environment, but the fact that Trump acknowledges the above sector as an important voter base provides a useful guide.

There is a general sense that he has tapped into the fears of undereducated white males, who are looking for any opportunity to regain the political dominance they feel they are losing. Unfortunately, individual suicide – and now potentially collective suicide – seem to be legitimate tools to achieve their objectives.

Fear as a motivator, particularly as triggered by the influx of refugees, is obviously not limited to the United States. It has been spreading (March 8, 2016) throughout Europe, leading to Brexit (August 16, 2016 blog) as well as radical political movements in France, Germany, Holland and Hungary. Similarly, fear has recently dominated the Philippine presidential election; in that case, it stems from drug traffickers rather than immigrants.

I feel that each of these reactions demonstrates voters choosing what amounts to a collective suicide as a remedy for personal despair. Almost all of these places were, and still are, stable democracies (Philippines is a bit of an exception); any statistical yardstick can tell us that unlike Germany post WWI, we are doing fine. Yet on a subjective level, many feel desperate and are willing to vote for something that – if nothing else – will give them a chance to bring everybody else to their level of despair. If the numbers that vote are large enough to bring about such drastic change, we are in serious trouble. If Trump wins this election, we deserve him.

Again, I fear the people and can only hope that reason will prevail over panic!