Posted on August 6, 2019 by climatechangefork 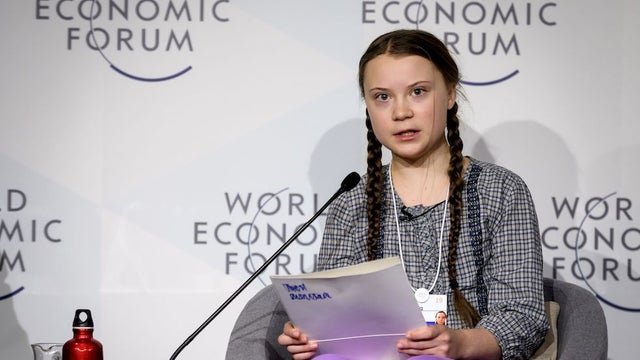 Children are our future, and this is especially true with regards to climate change. They are the ones that will bear the brunt of its effects. Fortunately, some of them are well aware of this and taking action: our grandchildren will show the way, with Greta Thunberg in the lead. I took her picture from a piece in The Hill that describes some of her main activities:

Greta Thunberg, the Swedish teen who inspired a massive youth movement to combat climate change, announced that she would be donating the proceeds from her newest book to charity.

“Some of my [speeches] have been released as a book by Penguin Random House. It’s out now,” Thunberg, 16, tweeted Monday.

“All of my earnings will go to charity. Just like the other books by me + my family.”

Thunberg, the founder of Youth Strike for Climate, began advocating for climate change policy last year by walking out of school to protest weekly outside the Swedish Parliament.

Her school strike inspired thousands of students worldwide to walk out of their classrooms and demand action on climate change from their political leaders.

“No One Is Too Small to Make a Difference,” published by Penguin Random House, is a selection of 11 of Thunberg’s speeches, according to The Guardian.

Thunberg, who has also addressed world leaders at a United Nations climate conference, was nominated for the Nobel Peace Prize earlier this year.

“Greta Thunberg has launched a mass movement which I see as a major contribution to peace,” said Freddy André Øvstegård, a Socialist member of the Norwegian Parliament.

I really hope that she wins the Nobel Prize!

What else can children do? They can lead the change in perception, starting at home:

“Children can foster climate change concern among their parents”

The collective action that is required to mitigate and adapt to climate change is extremely difficult to achieve, largely due to socio-ideological biases that perpetuate polarization over climate change1,2. Because climate change perceptions in children seem less susceptible to the influence of worldview or political context3, it may be possible for them to inspire adults towards higher levels of climate concern, and in turn, collective action4. Child-to-parent intergenerational learning—that is, the transfer of knowledge, attitudes or behaviours from children to parents5—may be a promising pathway to overcoming socio-ideological barriers to climate concern5. Here we present an experimental evaluation of an educational intervention designed to build climate change concern among parents indirectly through their middle school-aged children in North Carolina, USA. Parents of children in the treatment group expressed higher levels of climate change concern than parents in the control group. The effects were strongest among male parents and conservative parents, who, consistent with previous research1, displayed the lowest levels of climate concern before the intervention. Daughters appeared to be especially effective in influencing parents. Our results suggest that intergenerational learning may overcome barriers to building climate concern.

What about legal resources? Can children sue the government and their parents’ generations for destroying their future? They’ve certainly tried:

Three federal judges heard arguments Tuesday about whether young people have a constitutional right to be protected from climate change. In the lively, hourlong hearing, the judges, from the Court of Appeals for the Ninth Circuit, pushed skeptically on the arguments of both sides.

Education is key. Type “teaching climate change” into the search box at the top of the page and you will find 47 entries from the over 7 years that I have been blogging here. One of these is a guest blog from Randee Zerner (April 1, 2013) about how her 4th grade kid started pushing her family to take its own steps to mitigate climate change:

Meanwhile, of course, for those children who don’t yet know about the problem, the more traditional flow of information remains. Parents and teachers can (and should) explain climate change to youngsters. In doing so, they might even be able to process their own beliefs and concerns.

Psychologists say the way parents and teachers talk about climate change with children has an effect on their young psyches.

“A lot of people, when they talk to kids, are processing their own anxiety and fears,” said John Fraser, a psychologist and chief executive of New Knowledge, a social science think tank that studies health and the environment. “Do you think kids won’t be scared, too? As a culture, we haven’t developed good tools to talk about these things.”

Janet K. Swim, a professor of psychology at Penn State University, said she emphasized several steps for parents (and teachers, for that matter) to take when talking about climate change with youngsters.

“You should start off with something positive, like, ‘We like the planet,’” she said. This should be followed with taking children outside to appreciate nature. For city dwellers, this is as simple as going to a park. Families in more rural areas can hike.

“The goal is for them to appreciate the beauty of nature,” Dr. Swim said. “They should be thinking about what is good in the environment.”

This serves a purpose: connecting children to a world larger than their own.

“There is this thinking that young kids will understand what we are talking about,” Dr. Fraser said. “But summer and fall are new. They are only beginning to understand the seasons. Nature, to them, is a tree.”

This interplay between generations is even taking place before conception: some people are refusing to have kids at all because of climate change. Personal experience from teaching has shown that the students who have expressed this sentiment have been exclusively female. Why? I will return to this issue in a future blog, where I will revisit my discussion of major global changes in fertility rates all over the planet.

6 Responses to Children and Climate Change