Integrate “Them” with “Me” and “We”: Omicron, Climate Change and Global Threats

Posted on December 14, 2021 by climatechangefork

Fall classes are over for the semester at my school (final exams are still coming, though, so it’s not over for the students). Christmas and New Year are around the corner and now’s the time to think and make wishes. COVID-19 is not yet over so, at least for me, travel is highly restricted. We are still in the middle of a unique double global transition that requires all of us to act in ways that we are not used to.

I’ve been thinking a lot about the issue of “Them” vs. “Me” vs. “We”; it’s a theme that I have covered through this blog’s nine-year run. For example:

Inequity: The Intersection of Coronavirus, Poverty & other Expected Trends

Me vs. Them vs. We – Nationalism/Populism vs. Globalism

It’s a sort of cumbersome concept and I asked my wife, a professor of psychology, to suggest a more compact expression. She suggested, “all of us.” I thought about it and responded that it is compact enough but it misses the dynamics of the interactions between the three components. So, she added, “all of us, uniquely.” I am still trying to figure out how I feel about that, so in the meantime, I will stick with what I had and proceed with the specifics on all the scales that I have in mind. After that, I’ll wait for your input. In this and the coming blogs, I will refer to Me, We, and Them as the “three components.” 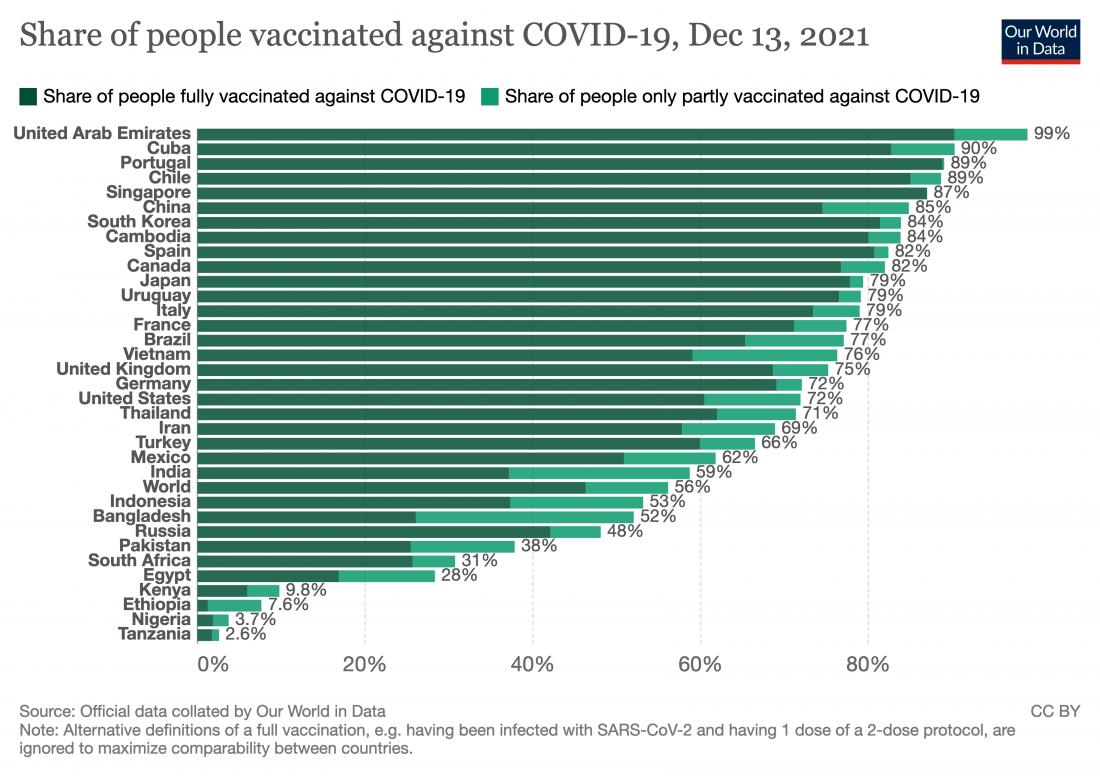 The omicron variant of COVID-19 was discovered in Botswana and South Africa. Figure 1 shows that the partially vaccinated rate in each of these countries is about 30%. The NYT wrote about the correlation between low vaccination rate and the evolution of new viruses that can easily spread globally:

Most wealthy countries have vaccinated significant shares of their populations and have rapidly moved into the booster-dose phase. But one year into the global vaccine rollout, the gap between vaccination rates in high- and low-income countries is wider than ever.

Poorly vaccinated countries face several challenges. Early in the rollout process, some countries were not able to secure enough doses to inoculate their residents, and many still face shortages. In others, supply is only part of the story. A New York Times analysis of available data highlights the countries where infrastructure issues and the public’s level of willingness to get vaccinated may pose larger obstacles than supply.

As new viruses, such as omicron, start evolving and spreading globally, the rich countries feel compelled to recommend booster shots, which only enhances the shortages in the poor countries:

As the emergence of the omicron variant of the coronavirus has spurred governments of wealthy nations to step up booster-shot campaigns, the World Health Organization again expressed concern Thursday that the push could further undermine global vaccine equity.

The administration of boosters is now outpacing first shots around the world.

On issues such as the pandemic and as we will see, climate change, slogans such as MAGA (Make America Great Again) are unhelpful—we’re all in this together, meaning that in such matters we don’t actually have an Us or Them—almost any disaster tends to spread globally.

Climate change doesn’t spread through viruses, but the impact is global, and while the rich countries have the resources to help poor countries to adapt (to a point), they mostly don’t seem to be doing so. The problem is that when people cannot make a living, they will try to move to places where they have a higher probability of adaptation and acceptance. The result is a major global instability with security threats to everybody. I have covered this issue in past blogs as well (See January 28, 2020). 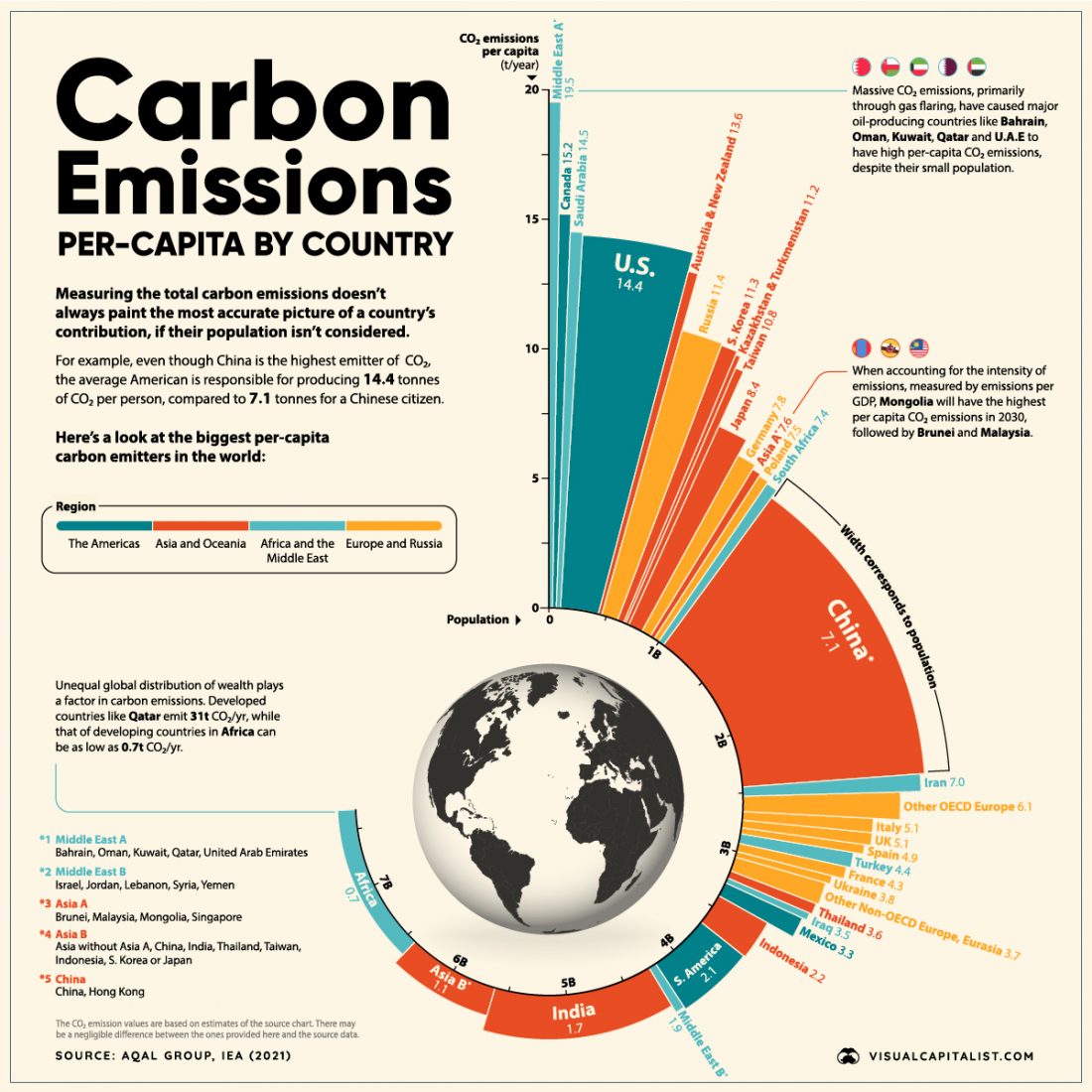 The Guardian reminds us below that rich countries have contributed more than 50% of the carbon emissions, even though them make up less than 10% of the population.

“The richest 10% produce about half of greenhouse gas emissions. They should pay to fix the climate”

There is a fundamental problem in contemporary discussion of climate policy: it rarely acknowledges inequality. Poorer households, which are low CO2 emitters, rightly anticipate that climate policies will limit their purchasing power. In return, policymakers fear a political backlash should they demand faster climate action. The problem with this vicious circle is that it has lost us a lot of time. The good news is that we can end it.

Let’s first look at the facts: 10% of the world’s population are responsible for about half of all greenhouse gas emissions, while the bottom half of the world contributes just 12% of all emissions. This is not simply a rich versus poor countries divide: there are huge emitters in poor countries, and low emitters in rich countries.

For the full record, see Our World in Data.

This fact had a strong impact on the recent COP26 meeting in the unanimous final resolution in the COP26 meeting (see the November 23rd blog). The relevant entries are below:

One of my earlier posts that I mentioned in the beginning of this blog uses a Venn diagram with circles that represent climate change, COVID-19, population, and jobs, with a central circuit that overlaps with the previous four that represents equity. The meaning of equity is broad. It can mean purposeful redistribution of resources so that everyone experiences equal gain and/or equal suffering but it can also be less purposeful: the winners may become more vulnerable as they are eventually affected by losers’ losses (e.g. refugees from poor countries fleeing to rich ones). Both aspects are important. Thus, equity is a central managing tool for society to flourish and try to make everybody better. Everyone should be involved. As I mentioned before, this is the end of the semester in my school. In the next few weeks, I am supposed to have more time. Knowing that, my French family recommended that I read Thomas Piketty’s new book, Time for Socialism. I bought it and when I scanned it, it became obvious to me that Piketty doesn’t use “socialism” the way either my extreme left French cousin or Senator Sanders and his followers do. It seems much more in the same vein as European Social Democrats or American Democratic party. I’ll let you know how it is.

Micha Tomkiewicz, Ph.D., is a professor of physics in the Department of Physics, Brooklyn College, the City University of New York. He is also a professor of physics and chemistry in the School for Graduate Studies of the City University of New York. In addition, he is the founding-director of the Environmental Studies Program at Brooklyn College as well as director of the Electrochemistry Institute at that same institution.
View all posts by climatechangefork →
This entry was posted in Climate Change and tagged Adaptation, CO2, CO2 emissions, commitment, COP26, coronavirus, covid, COVID 19, damage, developing, Economics, Emissions, finance, GHG, Glasgow, impact, Inequality, inequity, Investment, Mitigation, Paris, Piketty, pledge, socialism, Technology. Bookmark the permalink.

1 Response to Integrate “Them” with “Me” and “We”: Omicron, Climate Change and Global Threats