Posted on July 26, 2016 by climatechangefork

The people who are primarily looking for better economic opportunities are generally not labeled refugees; they know where they are going and leave for a specific purpose. Refugees are classified as those who are forcibly being displaced and are escaping from acute danger to their or their families’ existence. Figure 1 shows how the United Nations High Commissioner for Refugees (UNHCR) characterizes the tallied 65 million people that are presently classified as forcibly displaced. 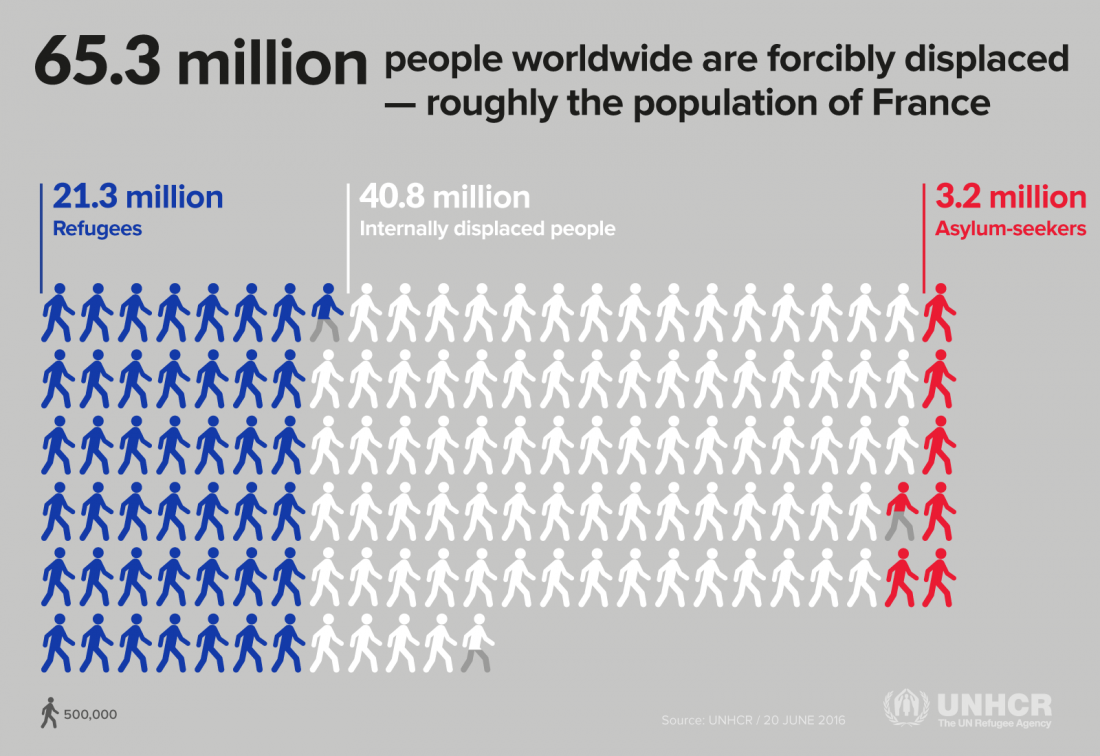 Figures 2 and 3 were taken from a recent special report The Economist published on the global refugee crisis. The figures describe the present global distribution of registered refugees and the recent history of major population movements. The data for these figures also originated from UNHCR reports. 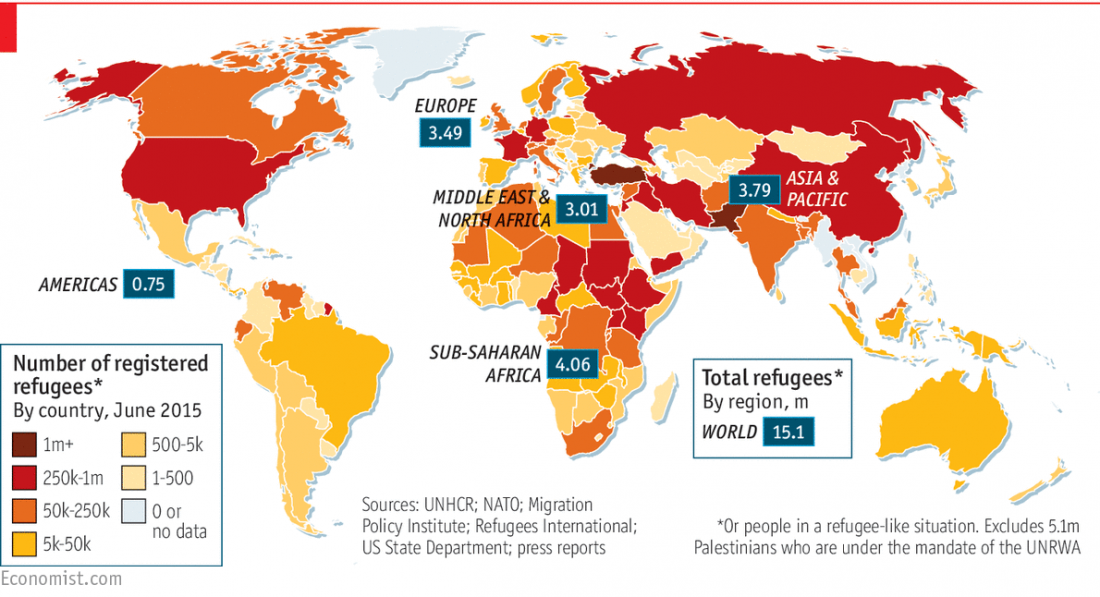 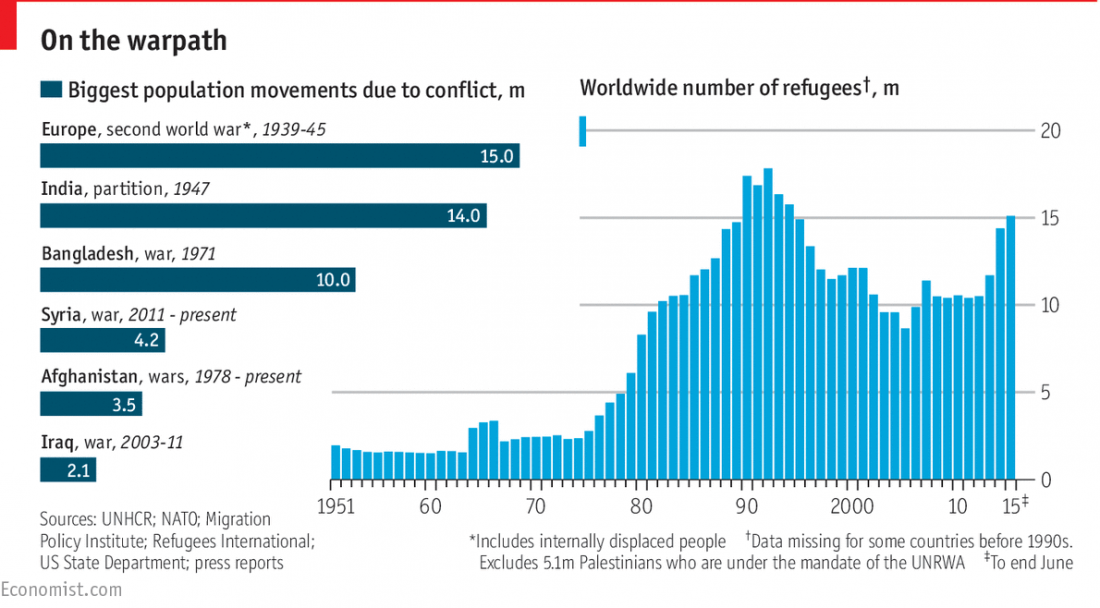 Figure 3 – The recent history of the largest population movements

Every organization with a role in governance – from local and national governments to international organizations such as the UN – needs reliable estimates of the future demographics of the domain under its control. The first term in the IPAT identity (see June 28 blog) is the expected global population. Population in any territory is derived from the sum of births and deaths and the net balance between immigration and emigration. Estimates of birth rates based on fertility and death rates are usually extrapolated from the most recent statistics. Estimates of immigration and emigration are highly inexact and irregular but they are necessary for nearly every political, economic or social economic discussion. Statisticians from the University of Washington recently published their attempts at statistical assessment of global migration by country/region in one of the most prestigious and selective scientific journals: The Proceedings of the National Academy of Science. Figures 4 and 5 summarize the group’s main conclusions. The shaded areas indicate the enormous uncertainty of any prediction regarding migration. 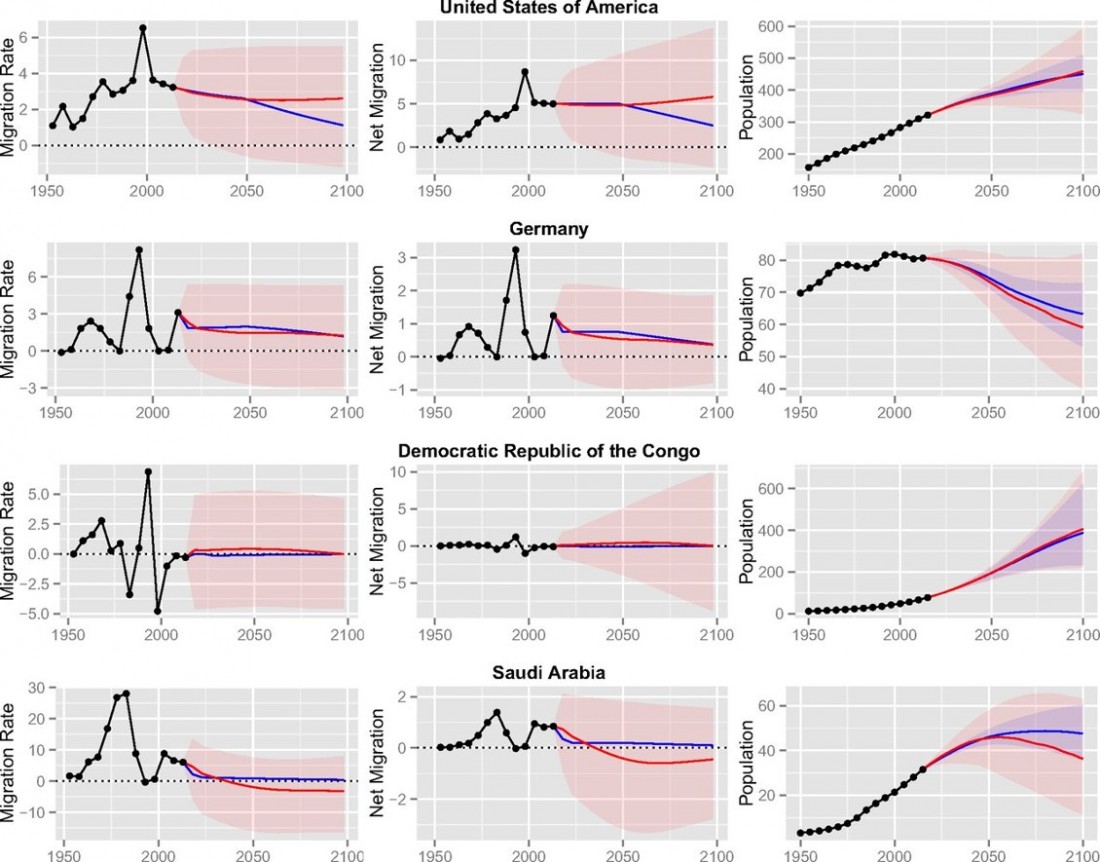 Up to now, we have focused on recent past and present factors of global migration. Climate refugees are a relatively new phenomenon, but almost every estimate says they will play an increasing role in influencing our collective action to mitigate the impact of anthropogenic climate change. I will close this blog with a few key paragraphs from a recent New York Times article describing some activities that are already taking place on this front:

In January, the Department of Housing and Urban Development announced grants totaling $1 billion in 13 states to help communities adapt to climate change, by building stronger levees, dams and drainage systems.

One of those grants, $48 million for Isle de Jean Charles, is something new: the first allocation of federal tax dollars to move an entire community struggling with the impacts of climate change. The divisions the effort has exposed and the logistical and moral dilemmas it has presented point up in microcosm the massive problems the world could face in the coming decades as it confronts a new category of displaced people who have become known as climate refugees.

… Around the globe, governments are confronting the reality that as human-caused climate change warms the planet, rising sea levels, stronger storms, increased flooding, harsher droughts and dwindling freshwater supplies could drive the world’s most vulnerable people from their homes. Between 50 million and 200 million people — mainly subsistence farmers and fishermen — could be displaced by 2050 because of climate change, according to estimates by the United Nations University Institute for Environment and Human Security and the International Organization for Migration.